Every giant Muppet monster primarily exists to eat the smaller puppets.  But the first monster to do this was not very big.  In fact, he was barely a complete head.  All that was really needed for the effect was a mouth, and a mouth is just what Yorick had. 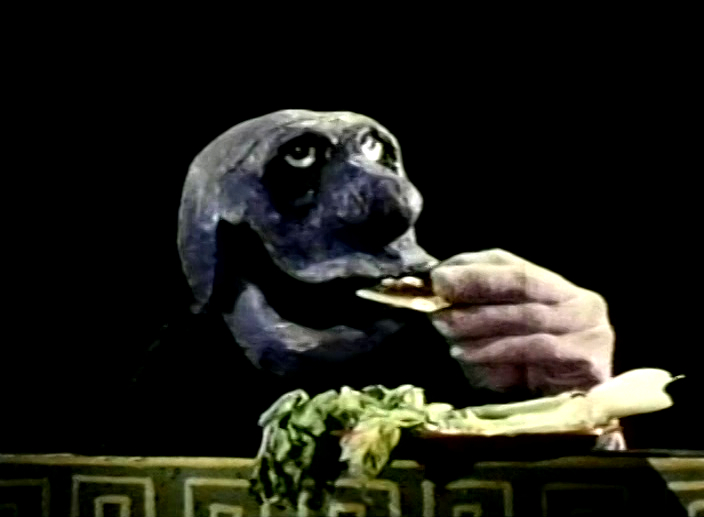 Nom nom nom.
Like his Shakespearean namesake, Yorick was once a source of immense humor.  In Hamlet, the protagonist laments that all that remains of the beloved jester from his youth is a bare skull.  The man who could once use his body to display great physical comedy now is reduced to a few bones, incapable of life and indistinguishable from the earth.

And he doesn't smell too keen, either.
But Henson realized that sometimes a head is all you need.  One shouldn't let severe disabilities like a lack of limbs/life prevent them from achieving their dreams.  And so, he had Yorick join the cast of his first television production Sam and Friends.  Being only a head, he was best for talking and eating.  And when Henson could not settle on an adequate voice, eating was his main function in a sketch.
His iconic skit involved a young Kermit lip-synching to "I've Grown Accustomed to Your Face" to what he assumes is a friend.  But hidden beneath the surface was the gluttonous Yorick. 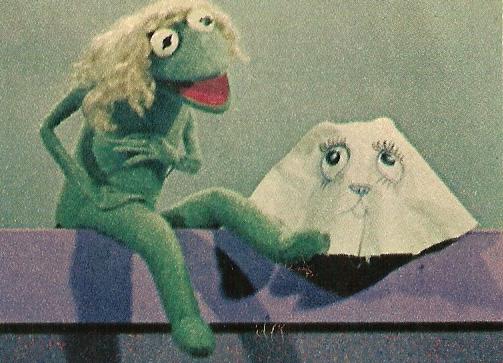 As usual, Kermit was in drag.
(Although I was unable to find one of the original performances, Jim's son Brian recently performed the sketch using and different frog and an updated Yorick.  Other than that, the sketch is virtually unchanged.)
Surprisingly (unsurprisingly?), Yorick was voted to be the most popular member of the cast, beating out Kermit and the lead star Sam.  Once again, Henson showed that there was elegance in simplicity.  There was no reason to explain who this creature was or why he ate everything.  He just did and it was funny.
That being said, there was one routine that was just made for the blue skull.  One that provided a look into his psyche and showed us that he is just like us.  Using a Ken Nordine spoken word jazz-track, Yorick shared his inner-musings with us.  This usually silent creature now had a voice, creating something even scarier than a beast with an appetite for flesh.  This was a monster with a brain.  A rationalizing, intelligent mind who planned his meals carefully.  Like Hannibal Lecter, he knew what he was doing was frowned upon, yet hunger can be a powerful urge.  I challenge you to watch the following and not start to feel a little peckish yourself.
We can all relate to the basic bodily functions.  It creates an instant connection to the characters on screen.  Those who struggle against all odds to get a drink of water or gasp a breath of fresh air or fight for someone they love or, in this case, eat SOMETHING, those are the ones we sympathize with.
Alas, poor Yorick.  He manages to exist beyond death, continuing to share his gift of humor to the world.  But he is devoid of the pleasure that a simple meal once used to bring him.  Without a tongue, he cannot taste.  Without a stomach, he cannot digest.  Without a body, he can never be full.  And so he continues to eat.
And eat.
And eat.
Because he can never be satisfied.
Posted by John H. at 11:56 PM