There is nothing so cruel in this world as the feeling of unrequited love.  This familiar, unpleasant phenomenon has plagued mankind for ages.  One of the earliest known accounts of such an experience occurs in Greek mythology with the tale of "Echo and Narcissus" from Ovid's Metamorphoses.

Echo and Narcissus (1903) - John William Waterhouse
As the story goes, Echo was a nymph who loved to talk.  She would often distract the goddess Hera with her stories while Zeus would escape to have affairs.  Hera, angered by this ruse, cursed Echo to only repeat what was spoken to her.  Echo, saddened, went off into the forest where she discovered Narcissus, the most handsome man in the land.  Echo became instantly smitten.  After some difficulty in communication, she finally revealed herself to him and tried to embrace him.  Narcissus, whose arrogance was so grand that he found no woman to be worthy of him, brushed her off, leaving her to waste away until only her echoing voice remained.  (Don't worry, Narcissus also became cursed to a lonely life by falling in love with his reflection in a pond.)
History often repeats himself and the trials and tribulations of romance are no exception.  Countless people have fallen for those who do not return the attraction.  Yet, the rejection can feel so grand and personal that few would wish it on their worst enemies.  It is because we can easily sympathize with the internal pain that many of our romantic heroes fall victim to its clutches.
Poor Grover.  He is one of Sesame Street's most upstanding citizens and yet he often undergoes much suffering and torment.  Fortunately, he retains an optimistic attitude that pulls him through from day.  He can bounce back from anything, and thus, he is a wonderful role model for anyone in despair.  Like Job, he retains his faith in the inherent goodness of the world around him, even as his experiences would tell him otherwise.
In today's clip, Grover adopts the role of Echo, hoping to charm and impress the narcissistic Madeline Kahn, who has a beautiful singing voice that she is a little too proud of.
Kahn invites Grover in with a fun game, cutting off his initial advances.  She places him in the "Echo" role so that he can no longer make the decisions in the song.  Although he has trouble understanding the concept at first, he soon catches on and enjoys the solidarity of singing a duet (albeit a lopsided one).  However, as Kahn shows off her talents, she not only proves that she loves the sound of her own voice, but she forces Grover to accomplish a task he is not capable of. 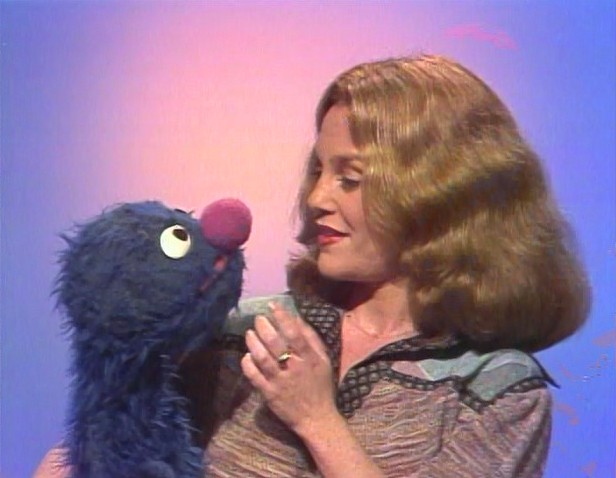 We're having "fun."
Finally, on the last note, Grover attempts to out-do Kahn and belts out an enormous yell, straining his back in the process.  Throughout the entire song, Grover is suffering embarrassments and pains, yet he is oblivious to them as he engages playfully with the beautiful siren on which he sits.  He exists only to inflate her ego and he willingly does it because he loves her and wants to make her as proud of him as she is of herself.
Grover dispenses love more than any other creature on Sesame Street.  He not only shows it through his kind, helpful actions, but he outright states it many times.  Often, he tells it to guests that he as just met, and, even more often,  he tells it to people he has unintentionally wronged in some way.  His social awareness may not be the sharpest but you cannot blame him for wanting to spread love throughout the world.  But, like his spiritual ancestor Echo, Grover is doomed to live in a state where he can only express love and not receive it.
Posted by John H. at 1:12 AM