A dear friend once said to me, "I was not a fan of Gonzo."

I can fully understand how one would come to that conclusion.  He is quite a handful.  His masochistic lust for danger defines him.  He fancies himself to be a daredevil, but his stunts are usually looked down upon by the rest of the Muppet crew.  His feats would be impressive if they did not fail most of the time.  Without the skills to make it as an artist, he just wastes everybody's time and gets on their nerves with his near constant presence. 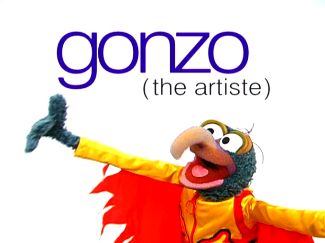 Wow!  I almost died!  Let's do it again!
Unlike Kermit, who's maturity and serious nature makes him appealing and multi-dimensional, Gonzo exists as pure comic relief, a punching bag for the puppeteers who enjoy slapstick and violence.   There is little room for growth.  Throw in the fact that he is a bizarre-looking creature with twisted features, and one can see how he would not be everyone's cup of tea.
I covered the practice of puppet recycling before and Gonzo was another victim of that practice.  He originally appeared in the special "The Great Santa Claus Switch" along with a variety of other strange figures known as "frackles."  His name was "Snarl" based on his hooked nose.  When he was repurposed for The Muppet Show it was unclear as to what exactly he was supposed to be.  He was written off by the other characters and the staff as a "whatever" or a "weirdo."  Nobody knew and nobody cared.  But Gonzo did not seem to mind.
Being the only one of his kind, he developed bizarre attractions to fowl.  His longest relationship was with a non-speaking chicken named Camilla.  This almost bestial fetish made him even more unappealing to the others around him.  Yet, he had no one else to relate to.

Deep within Gonzo's soul lies a certain loneliness that cannot be replaced.  He knows that he doesn't quite fit in on this planet and he chooses to look on the bright side of life to get through the days.  But, in one rare moment, Gonzo reveals there is a lot more to him than meets the eye.

This looks familiar.  Vaguely familiar.
Shortly after meeting a new group of friends in a strange distant land, Gonzo shares his introspective melody "I'm Going to Go Back There Someday."

In one brief moment, this fuzzy blue weirdo has opened his heart to complete strangers, having already made the decision that these are the ones to trust.  He is far from his true family, and his past is a mystery, but here, he feels safe, letting these new people into his life.  His memories of traveling through the atmosphere give him that exhilarating sensation of belonging somewhere, as if he has a purpose.
He has found his home.  His new friends may not understand him, but they are all he needs to continue.
Everyone has a least favorite Muppet.  Many are broad caricatures good for a laugh and nothing more.  They remind you of the people in your life you'd rather not hang around.  But everyone deserves a chance.  First impressions are not the end all be all.  People from vastly different worlds can find a common ground if they take the effort.
One of the best decisions that can be made is to start a conversation with someone you barely know.  And don't let it die.  If you put in some effort, you can reach deeper levels that extend beyond the surface.  Take the time to get to know the weirdos in your life.
They might end up becoming your best friend.

Email ThisBlogThis!Share to TwitterShare to FacebookShare to Pinterest
Labels: dave golez, gonzo, i'm going to go back there someday