If These Walls Could Shut Up...

There is no such thing as a bad premise.

Premises can be poorly executed and turned into terrible productions, but the premise itself is not to blame.  In competent hands, any premise can be turned into a masterpiece, no matter how bizarre.

The talking houses from the first season of The Muppet Show were a bad premise.

We'll need the most competent hands in the world to fix this mess.

The early years of The Muppet Show are infamous for their awkward recurring segments.  "Talk Spots," "Blackouts," and "At the Dances" were all phased out when the writers decided to opt for longer sketches, rather than quick jokes.  The Talking Houses were obviously going to go because they only contributed one joke per episode, and the jokes were all groaner house-related puns.  If you've seen one, you've seen them all.

You have just seen them all.

It was a shame that the houses were wasted in this fashion.  Such elaborate and unique designs were made just for these increasingly bland jokes.  There aren't enough house puns in the world to warrant this being a recurring segment.  In fact, the jokes get so lazy that by the end, it seems as if the writers weren't even trying anymore.

The talking house concept dated back to the early Muppet commercials in which a house puppet was used to promote the Federal Housing Administration.  It was clearly a complicated design and the Muppeteers knew they had created a really cool visual effect, like something right out of Toontown. 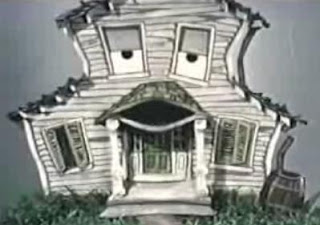 Disney's Psycho did not do well at the 1939 box office.

Bringing the houses back seemed like a great idea at the time.  But the writer's didn't really know what to do with them.  And the problem lied in the premise.

These are sentient Muppet houses.  Do Muppets live in these houses?  Are they the same size as regular houses or are they scaled down to the size of other puppets?  Are they monster houses?  The writers couldn't come up with a solid answer, so they just stuck them in their own little universe, unable to interact with the other Muppets.  In fact, it wasn't even clear if they were actually in the Muppet Theater or not.  The existential issues raised by these houses are the same reason Pixar's Cars creeped me out so much. 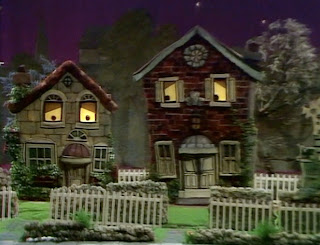 But, I'm sure something useful could have come out of this idea.  The houses are impressively crafted, even if they imply unspeakable horrors to the families that reside in them.  Finally, a decade later, Sesame Street knew how to properly use a talking house.

Here we meet 2102 Shady Lane.  She reminisces over her past, reuniting with the grown-up kids who once lived inside her.  It's sweet, although the puppeteer gives her an eerie, deep voice, as if to remind us to stay away from talking houses. 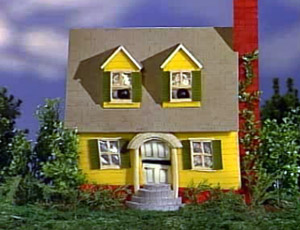 At least this is an actual sketch, with a beginning, a middle, and an end.  The house goes through a relatable experience, as she reconnects with her children.  We are made to feel sympathetic towards this house, this structure that has watched the world pass her by as others grew up around her.  She achieves happiness and peace, and we can't help but smile as her loved ones return to thank her for her gift of shelter.