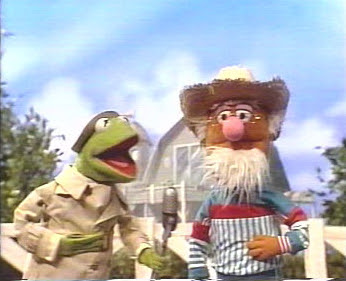 A Scottish farmer that longs for a break in the norm.

Like most nursery rhyme characters, Old MacDonald was a recurring guest on Sesame Street, particularly during the "News Flash" segments.  Kermit would appear, hoping to observe the usual goings-on down on the farm.  However, he would find that things aren't always as he expects, such as the time he discovered that Old MacDonald turned his farm into an animal health spa.

But Kermit's strangest visit concerned Old MacDonald's new addition to his farmstead.  Amongst the cows and ducks and pigs, MacDonald discovered a spaceship!  When it is revealed to be a big misunderstanding, MacDonald's theories are proven correct as his farm is finally visited by actual Yip Yip Martians!

Old MacDonald is bored with life.  He is caring towards his animals and doesn't shirk his responsibilities.  But it seems he was not cut out to be a farmer.  Between starting a health spa and managing a swine pop rock group, MacDonald does whatever he can to add some excitement into his world.  So, of course he gets swept up in the notion that there is life in outer space attempting to communicate with us.

Although they are less prevalent today, stories about alien abductions seemed to be heavily concentrated in sparsely populated areas, such as old country farms.  Cow mutilations and crop circles are commonly dubbed supernatural occurrences in these areas.  Being a lonely farmer, hearing all of these stories can cause one's mind to wander.  As soon as MacDonald catches a glimpse of the slightest unusual affair, he leaps to the conclusions that it must be aliens.  He alerts the news and proudly shows off his discovery, only to be proven wrong by the more educated sources.

Then, his prayers are answered as new life-forms appear at his home, on camera no less! 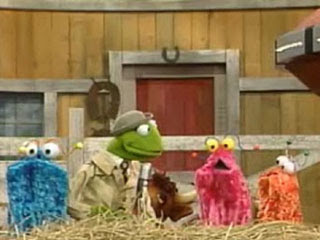 The arrival of these creatures don't just legitimate his beliefs, they prove that the universe is filled with possibilities.  He may have grown up a farmer, but he doesn't have to live the life of a farmer.  With his newfound fame and glory, he can do whatever he wants.

In life, we have to forge our own paths.  Otherwise, we'll be stuck with all of the boring talking animals and monsters like regular folk. 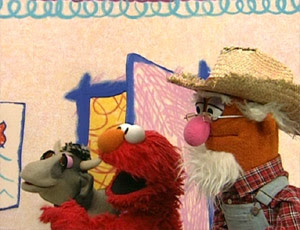 Ho-hum, another average day inside a trippy parallel dimension.

Astute observers may have noticed another Old MacDonald making appearances on Sesame Street.  This man is an impostor and is wanted for property damage and failure to keep animals on a leash. 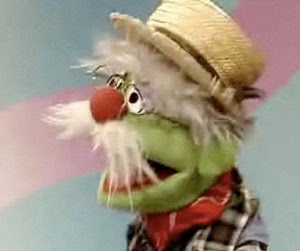 He was last seen taking a wife in the dell.  Reports confirm that the cheese stands alone.
Posted by John H. at 4:50 PM