Although, today, I cheated. 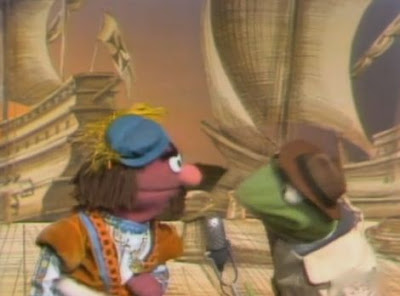 The man who "discovered" America.

In addition to interviewing fairy tale characters, Kermit the Frog took his "Sesame Street News Flash" segment into the past to interview historical figures.  This time, he travels to the year 1492 to watch Christopher Columbus as he sets sail from Spain.  The segment is mostly a lesson in subtraction (as each of Columbus's three ships leave port), but there is another lesson being taught here, one that perpetuates lies and falsehoods.

Why is He the Most Important Muppet?

History is written by the winners.

When we hear the name "Christopher Columbus," the first fact that comes to mind is that he discovered America.

Here is what's wrong with that fact:

- He wasn't even the first European explorer to set foot in the Americas.

- He never made it to North America, which features the country commonly referred to as "America."  He remained in Central America, and first visited the islands of the West Indies (a.k.a. the Caribbean).

- He wasn't even trying to discover America.  He was heading for Asia, specifically India.

Yet, despite all this, Kermit introduces Christopher as the man who will discover America, and Columbus concurs.  History has been changed and simplified to the point where our children are being fed false information. (Also, Kermit and Columbus keep talking about pizza, which was invented in Italy, not Spain, in the 16th Century, but now we're just nitpicking).

Nonetheless, the man has become famous for something he didn't do.  Columbus did, however, spark the European exodus that led to many more people traveling west, so it seems as if he was the first in that sense.  But as history changes through the telephone game of life, the truth becomes foggy and settles in to what is easiest for us to remember.

So, what is history, if not the truth?  And if we accept the lies as the reality, doesn't that make it so?