The Top Ten Sesame Street Song Countdown continues with a simple yet significant song.  You may love it, you may hate it, but there's no denying that nothing is quite like...


The force that is Elmo did not occur overnight.  The character slowly built his presence on the street over a couple of years, edging his way into the spotlight gradually and confidently.  But if we were to pinpoint a pivotal moment in Elmo's career, it would be "Elmo's Song."

Elmo speaks in the third person.  While this was intended to be a sign of his youth and innocence, it also works as a sign of Elmo's solipsism.  The world revolves around Elmo.  He is the most important creature in the universe.  He is the ultimate being.

In this scene, Elmo has written a little jingle that lacks thought-provoking lyrics and only comments on the fact that Elmo has written a song.  But he hasn't just written any song.  He has written "Elmo's Song," the song to replace all other songs.  When his friends are depressed for lacking a song of their own, the great Elmo graciously lends them his song.  But while it may be "Big Bird's Song" or "Snuffy's Song" temporarily, it is always "Elmo's Song."

This song quickly became Elmo's main theme music and an adapted version of it was used to introduce the "Elmo's World" segments of the 21st Century.  Right, one half of each Sesame Street was devoted to Elmo.  And he didn't just have a street.  He owned the world! 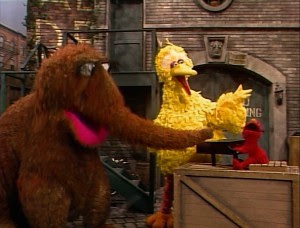 Time to take over the world! Ahahaha!

This song merely hints at the path Sesame Street would take at the dawn of the new millennium.  Elmo is not a monster to be trifled with.  He has laid his claim to all of music and has won over trusted friends, lulling them into a false sense of security.  By participating in his charade, Big Bird has lost the power he once held.  His era is over.  There's a new kid on the block.