I'll Have the Usual

Remember Polly Lobster and Clueless Morgan from Muppet Treasure Island?  Did you know that they were recurring characters on Muppets Tonight?  Yes?  Then you must be British because they were the next pair to appear in their own set of U.K. Spots!

And their series had nothing to do with piracy, treasure, or sailing the open seas.  They were bartenders. 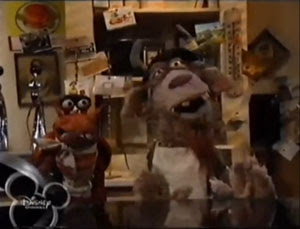 They are just as we remembered(?).

These were the "Mr. Callahan" sketches, and each one followed the exact same routine.  And I don't just mean like how "Veterinarians Hospital" always had puns and a repeated intro and outro.  No, "Mr. Callahan was virtually the same every single time. 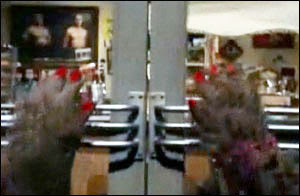 Everything was shot from his point of view, by the way.

- Polly Lobster would be behind the counter singing "Do Ya Think I'm Sexy?"

- He'd greet Mr. Callahan and offer him the usual.

- Mr. Callahan would (silently) decline and Polly would whip up a new drink (with violent results).

- Mr. Callahan would (silently) ask to see Clueless Morgan, Polly would call him out, and he'd enter (to thunderous applause from the audience).

- Clueless would comment on Mr. Callahan's outfit (something that would usually imply he was a crossdresser).

- Clueless would tell a meandering joke with Polly playing the straight man.

- Polly would instruct Clueless to "SING!"

- Clueless begins singing a song that gets interrupted in some cartoonish manner, knocking him and Polly out.

And they did this sketch SIX TIMES without straying from the formula.

Now, this was an oddly specific routine.  Surely there must have been a purpose behind the creation of this series.  Polly and Clueless were not particularly known for their vaudeville act in the movie.  So where did this come from? 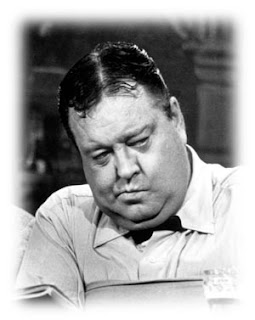 Jackie Gleason as "Joe the Bartender"

"Joe the Bartender" was one of Gleason's stage characters that he brought to The Jackie Gleason Show.  And, just as with the "Mr. Callahan" sketches, the routines were often very similar to one another.  Joe would begin the sketch singing, then he would greet a "Mr. Dennehy," and start exchanging one-sided dialogue with him.  This was basically Gleason's opportunity to tell funny anecdotes and monologues from a bartender's perspective.  Often, Joe would be joined by "Crazy Guggenheim" played by Frank Fontaine.  Guggenheim was a clueless man who also told long drawn out stories with a shaggy dog punchline, but his "brainless" demeanor dropped the moment he sang in his beautiful voice. 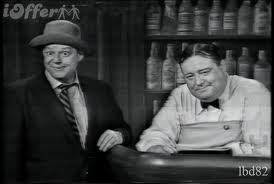 It all makes sense now.

Clearly, the writers wished to pay homage to these classic comedians and decided to put the Polly and Clueless puppets to good use since the movie was over.  And despite the repetitive nature of the routines, the sketches were always funny and captivating.  Usually repetition kills humor, but Gleason was a master of his craft.  When something works, it works.

Unfortunately, the Clueless Morgan puppet has since been lost, and so has the comedy team of Polly and Clueless.  It's difficult to say what could have happened had the two characters continued to thrive. But it's nice to see that even in the modern age, the Muppets still paid homage to the classics.
Posted by John H. at 7:59 PM