The Bird Is the Word

One of the strangest experiences is when you are forced to acknowledge something had you have becomes so used to that you no longer think about it.  Earlier this month, when Big Bird's existence was threatened, the voices of thousands cried out in support.  Everyone just assumes that Big Bird is a constant in life, at this point.  Every child will grow up knowing who the big, yellow bird puppet is.  There was no need to fear for his safety.  But by drawing attention to his elimination, he became real.

We expect a lot from our infants.  They need to learn how to move and communicate and think for themselves.  So when it comes time to learn the alphabet, we plunk them down in front of a string of 26 symbols and expect them to memorize it and understand each symbol's function.

This is a daunting task for a baby.

Enter Big Bird.  He sees the whole alphabet and interprets it to be a complex, multi-syllabic word with a unique vowel-consonant distribution.  He has made it harder for himself in order to make it easier for the children at home.  By managing to pronounce this impossible word, he has achieved an unnecessary feat so that we may not have to struggle.  He proves to us that it can be done, and everything after that is just cake.

We have become so used to seeing and hearing the alphabet that when it is presented to us in this new way, we really see how confusing it can be for those learning language for the first time.  Why is it in "alphabetical" order?  How are we supposed to get all of our thousands of words from that collection of symbols?  Why doesn't "U" follow "Q"? 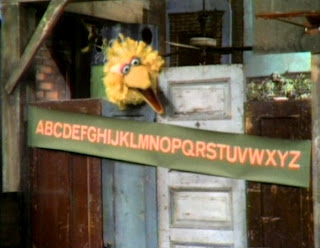 I have no idea what's going on here!

Sesame Street is not afraid to take that extra step, to make things a little bit more challenging.  Big Bird is just as absurd as the alphabet.  But without him, we would be lost.  Just because something becomes commonplace doesn't mean it should be forgotten.  Sometimes we need to take a step back and remember that just because we may not appreciate something anymore doesn't mean that the rest of us are through benefiting from it.
Posted by John H. at 2:18 PM