Love Any of Thy Neighbors

A few of the most memorable Sesame Street songs have been around since the very first season.  And, based on the premise of the show, it is quite fitting that one of these songs is...

5. The People in Your Neighborhood - Bob and the Anything Muppets


This song appeared many times, with many variations of singers, puppets, and occupations.  But each served the basic function of introducing children to the various people they might encounter when walking around their neighborhood.  Sesame Street was supposed to be the street that everyone could identify with, so the song went to great lengths to keep things familiar to the audience.

But rather than simply trot out various occupations, special puppets were used to drive home the concept of the song.  They are known as the "Anything Muppets," meaning that they start with a basic, colorful body shape upon which eyes, noses, hair, and other accessories can be affixed.

During the very first iteration of the song, the two puppets that Bob encounters (played by Henson and Oz) start out very nondescript.  It is not until Bob adorns them with some iconic imagery (a mail bag and a fireman's helmet) that the characters "become" productive members of their society. 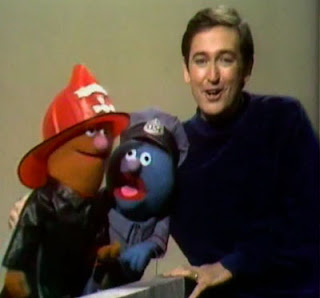 Yep, all you need is the right hat and you are fully prepared for the job.

The first few incarnations of this song reused the same blue and orange Anything Muppets played by Henson and Oz respectively.  The ideas was not only that there are many interesting and helpful people in the neighborhood, but also that one person could be anything they wanted to be. 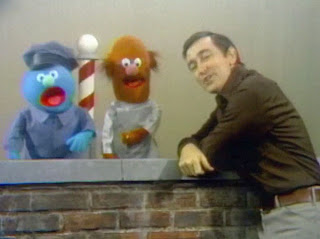 Except Bob.  He could only change his shirts.

The official audio release of this song is probably the best.  It takes the postman/fireman version of the song and includes some confusion as the two Anything Muppets struggle to identify their occupation (both think they are portraying Santa Claus at one point).  Still, you can view any clip of the song and the message comes along loud and clear.

As time went on, more occupations were added and different Anything Muppets were used.  But the core of the song remains the same.  Because as long as there are neighborhoods, there will be people that we should get to know.  That's what being a good person is all about. 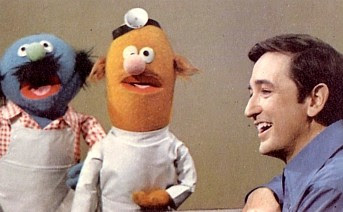 You can be a doctor or a grocer, but you'll always be a neighbor first.
Posted by John H. at 9:18 PM