Why do people go camping?  Some do it to be closer connected with nature, far from civilization and pollution.  There is an element of the wilderness being pristine and untouched, waiting to be enjoyed like a hidden treasure.  Others camp to challenge themselves.  Finding new ways to prepare food and shelter, while also trying activities like hiking, rock-climbing, and swimming.  It's that sense of adventure that attracts people from the comfort of their homes.  Still, others enjoy the camaraderie that develops.  You never really know someone until you go camping with them.  And then there are those that enjoy the peace and solitude.

All of these aspects make camping a wonderful choice for a vacation.  John Denver is obsessed with camping and he wanted to produce another special with the Muppets exploring the joys of the Rocky Mountains.  And what's John Denver's favorite thing about camping?

Apparently it's singing a never ending slew of cheesy songs. 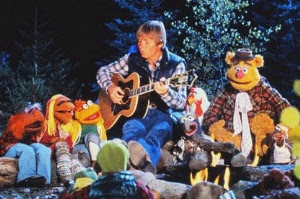 Rocky Mountain Holiday follows a similar format to A Christmas Together in that a loose storyline of Denver hanging out with the Muppets is broken up by traditional and original songs associated with the holiday.  But while a Christmas special can get away with a certain level of corniness, a summer holiday special seems to be forcefully dull.

For one thing, camping songs aren't as prevalent in the modern culture as Christmas songs are.  Because the airwaves get over-saturated with holiday cheer in the winter, we become numb to the actual content of the song and appreciate it when it rolls around.  If you aren't an avid camper, the camping songs aren't as memorable, but just as insipid. 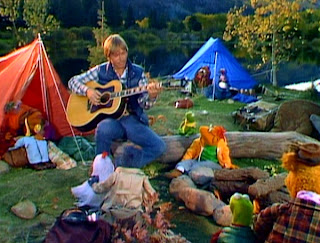 John Denver prides himself on wholesome entertainment, but seems to have forgotten that entertainment involves something entertaining by definition.  Denver, once again, seems to live in his own little world, singing songs to himself while the Muppets (being just shells of themselves) egg him on.  Like A Christmas Together, the unity between Denver and the Muppets is lacking, but at least at Christmas, the Muppets were able to do their own thing.  Here, it feels like Denver dragged all the puppets out to be his captive audience. 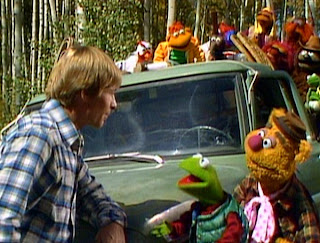 Give us the keys, Denver!

The Muppets constantly reminisce about past vacations they spent with Denver, but these moments feel hollow.  When they aren't stroking Denver's ego, they are going through run-of-the-mill camping jokes that were clever in the 1950s.  Animal pitches his tent...into a lake!  Rowlf is wondering where he can set up...his television set!  The Muppets aren't behaving like themselves.  They are just joke dispensers. 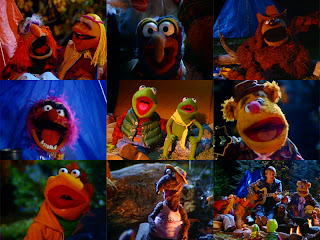 The gang's all here, but they aren't really "all there."

But the truly aggravating moments are the campfire sing-alongs that take up the second half of the episode.  The Muppets barely talk about anything other than what song is going to be played next.  Oh, there is a "hilarious" ghost story about a Man-Eating Chicken.  But other than that, it's just song after song after song. 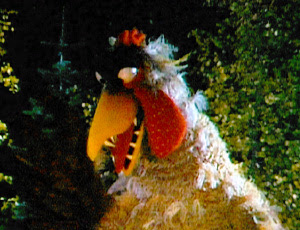 Even when the chicken does show up, it can't end the horror.

As I was watching this, I began asking myself, "Is this really it?  Is this what so many people love about camping?  Singing bland songs at each other all night?"  And then I remembered my own camping experiences with friends.  Yes, we sat around a campfire, but we didn't avoid conversation.  We delved into our inner most psyches.  We got to know each other in ways we never had before.  We played games and told jokes and had fun.  This is the camping special I would have wanted to see out of the Muppets.

Imagine Jim and Frank and Dave and Richard and Jerry, alone, as their characters, just improvising conversations about life.  That would have been a captivating special!

This is what the Muppets are capable of.  Let them live!  Don't keep them constrained to silly jokes and songs.  The Muppet moment I kept thinking back to as I watched this special was the camping scene from The Muppet Movie.  There, we have the exact same set up, but, due to the added drama of the movie, there is a somber, yet interesting tone to the scene.  They start singing and it is a genuine moment.  Kermit has a self-reflective monologue.  All because they are out in the middle of nowhere, trapped under the stars.  This is what Muppets are like when they go camping. 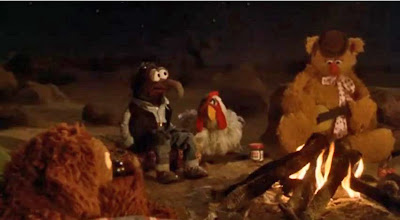 Rocky Mountain Holiday does contain some drama in that Robin feels as if he is too small to help out. But Robin is always feeling too small. All Denver does is sing some loosely-related song to him and it cheers him up. 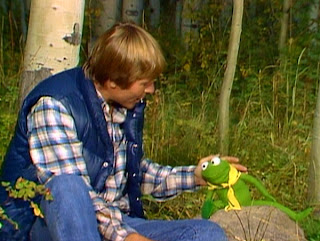 I went into this special with high hopes, but this sterile complication of musical numbers left me high and dry. There also exists an album version of this special, like with A Christmas Together, but since the point of camping is the experience of being outdoors in nature, we lose a lot of the beauty in the transfer to audio. 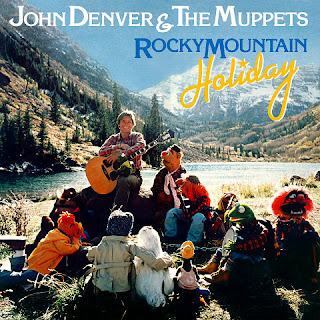 These pictures look so great.  Maybe if I watched the special on "Mute," I would have enjoyed it.

If you have fond memories of this special, I don't want to take that away from you. The special is quaint. And it's charming. But it lacks any sort of depth.

At least this special makes me want to go camping... far from any television sets.
Posted by John H. at 5:03 PM