It has become widely accepted that if a British television show becomes popular in, American producers will attempt to remake it and revel in there newfound wealth, rather than simply allow the American audience to enjoy the British original.  These shows can become amazing successes, such as The Office or dismal failures, such as Coupling.

Did you know that The Muppet Show is actually a remake of a British series, except the original cast was entirely human? 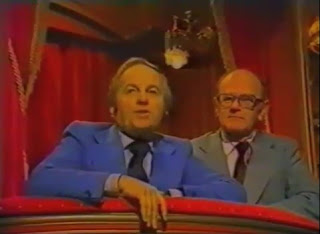 Ah, Statler and Waldorf.  Hilarious in any form.

Okay, none of that is true.  The Muppet Show was produced in England, and only in England.  The cast was American, so there was no need for a remake.  That image is actually from a special presentation made by the all-Briitsh crew of the show.  It was a parody filmed for the wrap party of the first season of the show.  Only the crew participated, so don't expect to see Jim or Frank or the regular cast make any appearances.  Instead, we get 10 minutes of antics as the crew plays around on the sets, mimicing the recurring segments and telling their own corny jokes.

WARNING:  THE FOLLOWING CLIP CONTAINS BRITISH "HUMOUR" AND MANY INSIDE JOKES.  YOU MAY OR MAY NOT FIND THIS FUNNY.

I'll admit, I had to watch this quite a few times just to catch all of the jokes, and even then there are some that will be forever lost on me.  The gang seems to have fun teasing the American cast's lack of punctuality and inability to meet deadlines. 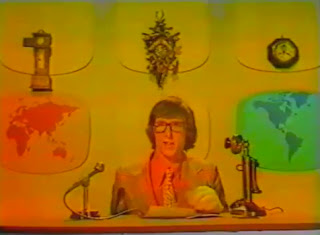 You know something is off when the Muppet News Flash guy doesn't get hurt in any of his three appearances.

This short segment unintentionally highlights the differences in British and American humor, and explains why American producers feel the need to "translate" U.K. shows (and fail so often).  British comedy tends to travel at it's own pace.  It doesn't stop for the audience.  Jokes can be broad or they can be subtle, but they come rapidly.  And when the accent is difficult to decipher, an American audience finds themselves struggling to catch up with the humor.

Then, for some bizarre reason, there are a few British comedies that keep their laugh tracks set at 100%. This is especially prevalent from shows made during the '70s and '80s.  After every single joke, no matter how clever or broad, the laugh track blasts the audience at full volume.  Subtlety is lost and dialogue is drowned out, making an already confusing comedy even more hard to understand. 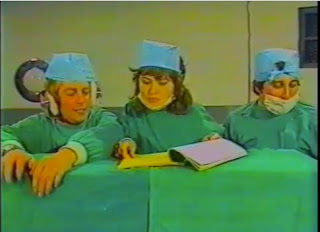 I literally had no idea what was going on in this sketch until the fifth replay.

This is why shows like The Office succeeded.  Without a laugh track, audiences could enjoy the shows at their own rate.  And the American version found time to develop its own distinct voice.

Notice how the reverse is never an issue.  Many American comedies become popular overseas in England, without the need to remake it for a British audience.  This is why The Muppet Show worked the way it did.  Despite its British surroundings, it found a pace that was manageable for all audiences.  Without the aid of Jim and his crew, the show could have very well ended up exactly like this presentation. 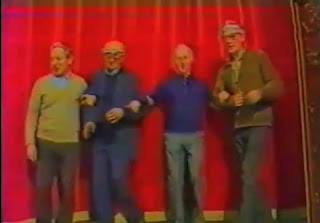 Nothing but old men as far as the eye could see!

Still, we are familiar enough with the show to enjoy this loving little send-off.  The way the stand-in Kermit flails his arms about, the explosions, and the group number at the end have that "Muppet" feel to them that even with the characters removed, we still feel at home.  It's just an interesting look behind the scenes at and we are lucky to have witnessed this private display of people just having fun, regardless of nationality.
Posted by John H. at 9:59 PM

Email ThisBlogThis!Share to TwitterShare to FacebookShare to Pinterest
Labels: a muppet crew presentation, the muppet show