Superheroes are our modern myths.  At least, they were.  People with superhuman abilities who could do no wrong were once the ideal heroes for modern culture.  They surfaced and gained prominence during World War II, partly because comic books were cheap to make, and partly because they featured simple stories of good triumphing over evil.  Superheroes weren't people we related to.  They were people we wanted to become.

As time progressed, superheroes behaved less like almighty gods and more liked flawed human beings.  It was as if a gigantic tonal shift had occurred.  And this wasn't just present in the comics.  Take The Muppet Show episode featuring Lynda Carter as the guest star.  At the time, she had just completed five years of portraying DC's Wonder Woman on television and she was ready for a break.  Unlike Mark Hamill, who appeared in character as Luke Skywalker, or Christopher Reeve, who denied he was Superman yet displayed Superman's powers in his episode, Carter did not appear as her iconic character throughout the entire episode.  She left that to the pig. 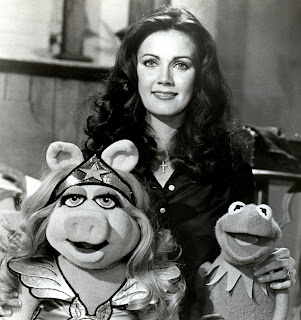 Wonder Woman's going to be on The Muppet Show?!  I hope they don't just put Miss Piggy in the costume!

The subplots of this episode feature each Muppet wanting to be a superhero, while the actual "superhero" just wants to be a regular person. Scooter orders a manual on how to be a superhero and soon everybody is dressed in silly costumes, attempting to lift heavy objects and see through walls. And they fail miserably. 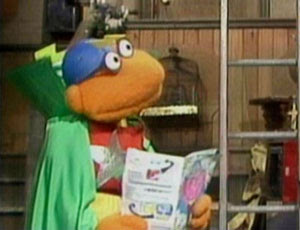 Well, what do you expect from a hand-drawn pamphlet?
Meanwhile, Miss Piggy, envious of Kermit's potential attraction to Carter, tries to make Carter jealous by playing Wonder Woman better than her (and looking better in the suit while she's at it). Carter clearly doesn't care about Miss Piggy's antics, and just humors her. This brings us to the centerpiece of the episode, "Wonder Pig," where Miss Piggy fights a giant chicken. This is still The Muppet Show, remember?

Backstage, the rest of the cast continues their education and Scooter eventually convinces them to climb up a tall ladder and leap off, ensuring that they will fly if they just believe in themselves. 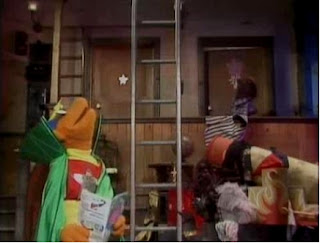 This is exactly the kind of behavior that injured many children back in the past. Children who wanted to be their heroes so badly that they would leap off their houses, expecting to soar around the sky. As dangerous as it was, it showed how powerful these fictional superheroes truly were. The reason so many superhero movies get made today is because today's adults were once those foolish children, running around their backyard in a cape. Even though all of Scooter's attempts at gaining superpowers fails, he still managed to warrant an action figure made in this get-up.

Complete with a dangerous ladder and everything!

For the shows finale, Lynda Carter sings "Orange Colored Sky." It is her chance to just be who she wants to be. Not a hero, just Lynda. But that doesn't stop the Muppets from interrupting her song with their futile attempts at being superheroes.

In the end, Lynda just can't escape it. She was one of the lucky few who got as close to being a superhero than any of us could ever dream of. She wanted to present her "real" self, but it was too late. She was Wonder Woman, and always would be. And she would have to take the good with the bad. 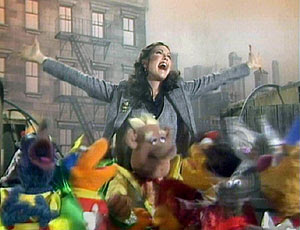 Today, our superheroes have been humanized. We no longer see movies with "purely good" heroes. We expect some reality in our fantasy. We need character flaws. It helps us relate to our protagonists, and it gives us something to root for. As I've mentioned before, the Muppets were born to fail. That's why we like them. And that's why we appreciate their behavior in this episode. They want to be the best and cannot achieve it at all. Perfection is an impossibility. We need imperfect heroes to remind us of that. 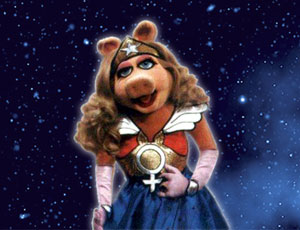 By being a worse Wonder Woman, she was a better Wonder Woman.
Posted by John H. at 8:46 PM