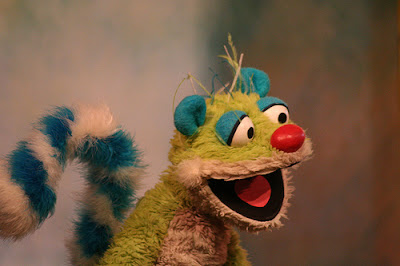 A bundle of energy.

Muppet Universe of Origin:  Bear in the Big Blue House

It's a quiet day in the Big Blue House, and everyone is content to do their own thing.  Some draw, some swing and some nap.  But Treelo can't stop moving and he wants everyone to dance!  He drags his music around imploring his friends to get up and move, and after some initial reluctance, everyone comes down with a case of "dance fever." 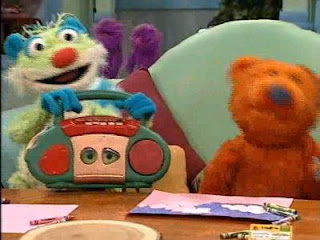 Eventually, all of the dancing gets Treelo tuckered out.  Finally, he decides it's time to rest, but no, the others say that he has to keep dancing.  My, how the tables have turned!

Bear in the Big Blue House was yet another Henson children's production at it separated itself from the rest by targeting a different age demographic.  Sesame Street was ideal for 3-to-7-year-olds, Fraggle Rock was for slightly older 5-to-9-year-olds, and the Disney Channel's Bear in the Big Blue House was best for 1-to-4-year-olds.  Because the audience was so much younger, there was a lot more order and simplicity to the events of the house.

Each episode began with the caretaker Bear greeting the viewer and smelling them.  Then, the topic of the day would be introduced.  Rather than learn a preschool curriculum, the topics dealt with daily discoveries in a toddler's life.  The characters would learn about things like bathtime, going to the potty, visiting the doctor, and playing outside.  The episodes would then end with Bear reflecting on his day with the moon Luna.

Like Blues Clues, the show featured a lot of talking directly to the viewer and repetitive songs that would signify each recurring segment.  Bear was the only "adult" in the show, and the other Muppets provided the mindset of children, much like the Sesame Street Muppets.

The youngest was Treelo, who seemed to be about two years old.  Unlike the other characters, he never had much to add in the way of teaching.  He just observed and participated and learned.  And, he ran around and climbed on walls because he was an unstoppable toddler.  And a lemur. 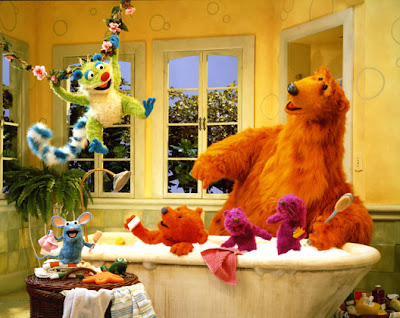 Treelo!  Get off of that bathroom vine!

Like a mix between Elmo and Baby Natasha from Sesame Street, Treelo spoke with a limited vocabulary and would often delve into incomprehensible baby babbles known officially as "Treeloese."  He was capable of having a conversation, but it was clear that he was still in the process of learning how to speak.

Despite his vocal limitations, he did not hold back in communicating his needs and wants.  Like all 2-year-olds, the world revolved around him.  If he wanted to dance, it was time to dance.  If he wanted to play, it was time to play.  He wouldn't throw tantrums, but he just lacked the ability to process that other people don't see life the way he does.  In the following clip, he tries to get the mouse Tutter to play a game of pretend with him.  Tutter, behaving like a 4-year-old who has just figured out logic and rationality, refuses to play the part of the Snow Bear because he is a blue mouse, not a white bear.

Tutter throws a fit trying to explain that a mouse can't be a bear, but none of this registers with Treelo.  He calmly repeats his request, since he enjoys playing Snow Bear.  He asks Tutter to pretend, and Tutter finally understands that he will have to play make-believe.  But for Treelo, "pretend" is just a word that people use when they are playing and it makes people more willing to do what he wants.  Tutter still remains upset that Treelo sees him as just another plaything, but Treelo can't help but view him in that fashion.

The reason Treelo barely had any signature episodes was because a 2-year-old operates on his own level, and only he would understand his true intentions.  In a show as orderly as Big Blue House, Treelo had nothing holding him back.  Putting him in charge would be sheer chaos.  "Dance Fever" is his greatest showcase, because he can present his case clearly, and everyone ultimately gives in and lets their inner child come out to play.  No worries, no responsibilities, no thoughts.  Just living in the moment.

Treelo exists in all of us.  Some are more in tune with him than others.  Life is a balance, carefully choosing the right moments to let Treelo out.  But sometimes, we need not think so hard. 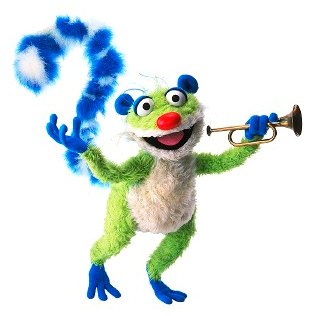