The last Tale from Muppetland featured a different kind of fairy tale.  Having dealt enough with princesses and kings and witches, Henson turned to the Grimm tale The Town Musicians of Bremen.  However, while the original referenced the German city of Bremen, Henson moved the tale down south, to the bayous of Louisiana.  And, aside from the setting change and the jazz music, The Muppet Musicians of Bremen was a straightforward adaptation of the original story. 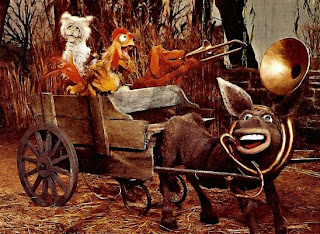 Everything about this image is straightforward.

For the uninitiated, the original story is about four old, worn-out farm animals (a donkey, rooster, dog, and cat) whose masters kick them out for being off little use to them.  They come across a bunch of musical instruments and they decide to travel to Bremen in order to become famous musicians.  Along the way, they stop at a house that is filled with robbers and all around bad guys.  They try to play their music for them so that they may have some food and shelter.  The robbers, thinking the noises are witches or ghosts or whatever, flee the scene, and the animals inhabit the house.

And the moral of the story is...monsters aren't real, only tuba playing donkeys are?

Anyway, the Muppet version follows the same path, except to fill out the hour, each animal is given some backstory to make us care about them more.  Apparently, their evil masters are also the robbers in the house, so we've got our heros and villains.  Since the story is practically unchanged, what makes this special so...special?  The puppets.

Check out the villains: 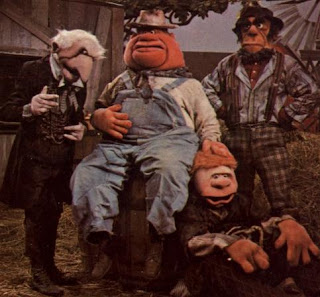 In case you can't tell, those are full-bodied puppets.  Rather than go with humans, as in the previous specials, Henson decided to try something new for the villains.  This is unlike the Taminella/Goshposh technique, where the puppet was controlled like any other puppet and the puppeteer hunched over, creating an obese character.  Here, the heads of the puppets were actually on the heads of the puppeteers!

So, how did they get them to talk and move?  Well, it's actually all done through clever camera edits.  The mouths would flap in long shots, but in close ups, the puppeteer would control the face with their hand.  Still, it's not very obvious when watching the show.  In fact, the effect was so convincing that Henson received praises from a makeup artist who thought that he had discovered a new type of face makeup that could incorporate puppetry! 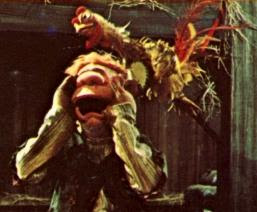 Because that's the most logical explanation.

The heroes of the story were not simple puppets either.  Each one of them incorporated elements of marionettes along with the traditional hand puppet (possibly originating the rumor that "Muppet" means "Marionette + Puppet").  Leroy the Donkey in particular is very large, and at times it's hard to tell exactly how he is being controlled. 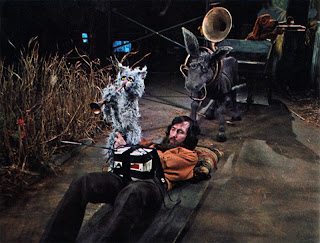 Yeah, that picture above isn't just a promo image.  We actually see the whole thing walk.

The decision to move the story to the American south helps lend a unique flavor to the special.  Henson was born in Mississippi, so he was returning to his roots (much as he liked to do whenever Kermit went back to his southern swamp).  But there seems to be more at play here.  The relationship between the animals and the humans in the story seems very similar to the relationship between slaves and slave-owners in the American south.  The language of the characters and dialogue that they have seem to reinforce this theme.  The music they create is influenced by that of early African-American culture (jazz, folk songs, and even the Rooster has a blues number).  If you close your eyes and just listen to the story, the similarities between the two cultures (fictional and non-fictional) is uncanny. 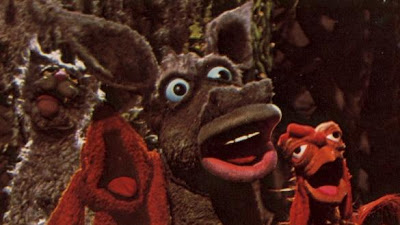 Racial commentary and civil rights history in a Muppet special?!

I've not found any other literature supporting this theory, especially not from Henson or his sources, but I couldn't help but think that that was at the back of the creators' minds as they were making this special in 1972.  Had the story remained set in Germany, there wouldn't have been any connection.  But Henson's a smart man, and he chose to set it in Louisiana for a reason.

Whatever the case may be, this is still a great special, from a technical and stylistic standpoint.  It manages to set itself apart from all other Muppet productions with its distinct music and dialect, and it managed to stay faithful to the original material, while at the same time being a unique property.  This was also the first Muppet production to use rats and chickens, Muppet species staples, so you know it has great importance in Muppet history.  A great end to the short-lived Tales from Muppetland.
Posted by John H. at 11:00 PM

Email ThisBlogThis!Share to TwitterShare to FacebookShare to Pinterest
Labels: jim henson, kermit the frog, tales from muppetland, the muppet musicians of bremen