Tinkerdee: The Lost Land of Henson

When looking at behind-the-scenes information on your favorite works of entertainment, it's always interesting to see the "what-could-have-beens."  Due to certain changes or decisions, iconic moments are made.  Anything can end up on the cutting room floor, both good and bad.  Going through Henson's history reveals a lot of projects that could have defined his career had they made it past the planning stages.  Today's feature was Henson's first attempt at a 30-minute television show.  And had it been prosperous, the most famous Muppet wouldn't have been Kermit the Frog, or even Rowlf the Dog. 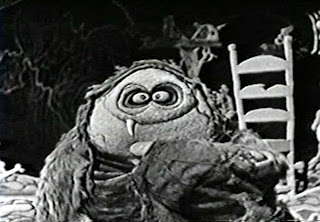 In 1962, Henson wanted to move away from commercials and 5-minute skits.  He had always wanted is very own show, and, with his writing partner Jerry Juhl, he created Tales of the Tinkerdee.

The show was to be a standard puppet show by way of Rocky and Bullwinkle or the Marx Brothers.  Despite being set in a typical fairy tale setting, the dialogue would be fast and witty, the plots would be complicated and farcical, and every episode would be complete madness.  The only familiar character returning to the show was Kermit, who served the role of wandering minstrel and narrator. 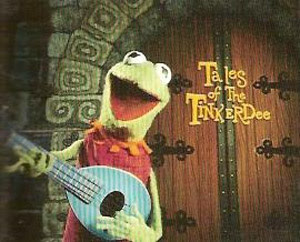 He also sang every single line, which wasn't as annoying as it sounds.

The rest of the cast was your standard fable fare: a king, his royal advisor, the fair princess, a witch, and her ogre henchman.  The two-dimensional castle and forest sets seem to have been pulled straight from a picture book.  But this is where the fantastical similarities stopped.  Everything else was pure comedy.  And it was hilarious.  The full pilot can be viewed on YouTube here.

The story seems to have been based on the backstory for Sleeping Beauty, where the local witch is upset at not being invited to the princess's birthday party.  However, in this tale, the witch Taminella spends the entire time with her castle heist in order to steal the gifts.  And even though the witch is technically our villain, we can't help but root for her because she is such an interesting and funny character.  Henson and Juhl have purposefully made King Goshposh an idiot, Princess Gwendolina a ditz, and the Prime Minister a weakling, so we want to see Taminella succeed as much as possible. 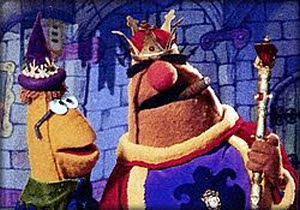 They also made the Prime Minister look like a squashed Scooter.  And gave him Droopy Dog's voice.

Taminella seems to have been the mother of today's popular despicable characters.  Characters like South Park's Eric Cartman or the horrid cast of It's Always Sunny in Philadelphia are well-received because their disregard for morality allows them to a) get away with a lot more humor and b) be enjoyable whether they win or lose.  We don't care whether the birthday party is ruined.  We just want to see the antics of Taminella and her ogre Charlie. 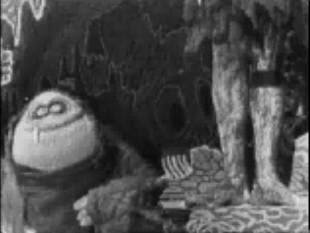 Don't know whose legs those are, but that "Ooooch!" is a great catchphrase.

And what hijinks they get into!  For a "simple" fairy tale, things get complicated quickly as Taminella must keep track of multiple disguises, spells, and the locations of every character.  The fact that so much humor can be extracted from a simple closet door proves that some real comedic talent was that the wheels of this project.  Eventually the plot became secondary to the show and you just want to see how farfetched the situation can get with everyone running around, foiling each other's plans. The black-and-white film adds another layer of confusion.  Are we looking at the princess in her statue form?

Due to the overly complicated plot and lack of foreseeable longevity, the series was never picked up.  A second attempt was made, called The Land of Tinkerdee.  This included a human host, a dog named Rufus, and a much barer setting.  This was more like your standard puppet show and...it was definitely lacking in the original's charm.  King Goshposh returned, but there wasn't any whimsy.

Without Taminella, the new show fell flat.  Ultimately, Rowlf was picked up to be the co-star of The Jimmy Dean Show, which kept Henson busy for a while.  But in some alternate universe, Taminella became the main Muppet star that she should have been.  We'll continue to look at the Muppet fairy tale specials that were the extension of this land of Tinkerdee this wekk.  Kermit, Goshposh, and Taminella would all come back, playing more traditional roles.  Taminella especially will become a cruel villain, rather than a lovable troublemaker.  This would not bode well for her popularity. 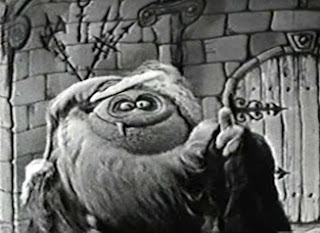