Christmas specials come in many varieties.  Some set out to tell a story, while others focus on the smaller moments of the holiday season.  Namely, the songs and the tales that have been told and retold for years.  These annual traditions create a sense of community.  When John Denver decided to create a Christmas special with the Muppets, he did not set out to radically alter our perception of the season.  He just wanted to create an hour of wholesome entertainment which could be shared among the whole family.

Ah yes, who could forget "A CH IS MA  T  ETH  ?"
John Denver & The Muppets: A Christmas Together exists in two forms: an album of music and an hour-long program based on that album.  Both are similar in sentimental style, but there are a few differences.  Because I was only vaguely familiar with the television special (which I negatively reviewed two years ago), I decided to look at both in tandem.  Many people are fond of both these Christmas products.  I wanted to see what I was missing out on and, more importantly, which one prevails as the superior creation.  Links to the songs will be provided within each description.
A Christmas Together: The Album vs. The Show 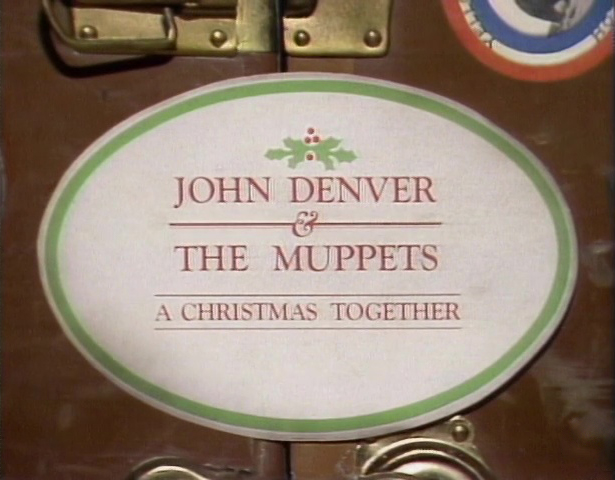 Round One:  The Twelve Days of Christmas
The very first song on the album also opens the show.  John Denver sings the first "partridge in a pear tree" line and is joined by 11 Muppets for each additional day.  This serves as a good intro of all the players of each special, although the order and participants are different for each.  On the album, Lew Zealand, Beauregard the janitor, and Bunsen and Beaker each take a verse, while Janice, Floyd, and Animal from the Electric Mayhem appear in the show (allowing Animal to sing the "twelve drummers drumming" line, as he should always do).  The show gets a point there, but what really helps it is the additional flubs of Fozzie as he struggles to keep up with the repetitive song.  This version is so admired that it was recreated in 2009 on Late Night with Jimmy Fallon.  Album: 0, Show: 1
BA-DUM-BUM-BUM!!!
Round Two: Alfie the Christmas Tree
"Alfie the Christmas Tree" is a poem written by John Denver about a tree who hopes that people remember that Christmas is a time to be grateful for not only family and love, but life and nature and everyone who inhabits this world.  The poem the segues into Denver singing "It's in Every One of Us."  It's a nice moment, but they way it is presented in the special comes off as very preachy.  Denver wanders around the wintery set, looking directly in the camera the entire time, making it hard to visualize the images of his poetry.  The album version is less forceful and, thus, easier to listen to.  The way the music swells behind his voice is far more pleasing to the senses.  Album: 1, Show: 1
Round Three: The Christmas Wish
Kermit and John sing a beautiful song about Christmas and unity.  The two versions are identical, except the show's version is prefaced with a small dialogue between the two.  Kermit is down in the dumps, noting that he will be away from his family again this Christmas.  He reminisces about life in the swamp, and although it is peppered with frog-related humor, it is genuine.  It becomes a perfect Kermit song with the additional backstory.  Album: 1, Show: 2
Round Four: Christmas is Coming
Miss Piggy leads a group of Muppets in a rousing version of the song.  So rousing, in fact, that she cannot control herself when it comes time to finish.  The show version comes a little bit out of nowhere and features nearly the whole cast joining in, which is humorous, but sloppy.  Also, I am a little biased against Piggy in this television special for reasons I'll explain later.  So I'll stick with the album version, which is smoother and just as entertaining.  Album: 2, Show: 2
Round Five: A Baby Just Like You
This is an original song by John Denver written for his infant son Zachary, explaining what Christmas is and how wonderful it is.  Unlike "Alfie the Christmas Tree," this one works better when Denver sings directly to the camera as it slowly draws closer, because it is a personal moment between him and his son.  The Muppets join him on the album version for one line, but this is really Denver's song, so his solo performance is better.  Album: 2, Show: 3
Round Six: Have Yourself a Merry Little Christmas
A duet between Denver and Rowlf at the piano.  It's just as perfect as you would imagine it to be and is nearly identical in both versions.  However, in the show, Miss Piggy runs in right at the end of the song, spoiling the tender moment.  Advantage, the album version.  Album: 3, Show: 3
Round Seven: The Peace Carol
A duet between Denver and Scooter, this time.  Scooter is a great singing partner, so, while I enjoy the image of all the Muppets crowded around the living room at night, basking in the glow of the fireplace and the Christmas tree lights, it's odd staging to have Denver and Scooter on opposite sides of the (crowded) room singing a duet.  Let Scooter have his own moment.  Album: 4, Show: 3
Round Eight: Silent Night, Holy Night
This song is much better suited to the ensemble in the living room.  It is sung originally in German, then in English.  This is the finale for the show, so they use this opportunity to pull back and reveal a multitude of children singing.  That makes for some good schmaltzy TV, and what's even better is that the children they do close-ups of aren't even singing the words.  Their tiny heads are trying to make sense of this whole moment.  That seems like a fault, but it makes the whole scene ten times cuter so the show gets one right at the end.  Album: 4, Show: 4
Hmm, we're at the end of the similarities, and both album and the show are holding their own.  We are going to have to settle this battle based on the merits of the rest of the material that is unique to either the album or the show.
Tiebreaker: The Rest
Let's tackle the show first.  While it is essentially a variety show, there is a little plot making its way through the musical numbers, making the structure similar to an episode of The Muppet Show.  For some bizarre reason, we see the special in the progress of being made at the same time as it's happening.  If that sentence was confusing, it's because I was confused as soon as the opening credits were over.
We began with John Denver and the Muppets singing "The Twelve Days of Christmas" decked out in holiday apparel.  The next scene is of the cast receiving the scripts...for the show they have already started.  What?  Then, after John Denver leads them into a little back stage rendition of "The Pleasure of your Company," he walks through a door into a white void where a holiday-themed set springs up around him and the song continues.  WHAT??

WHERE ARE WE???
After breaking the laws of space and time, we get into the real meat of the story.  Miss Piggy complains about being cast as an elf in the special and, more importantly, having very few lines.  She tries to seduce (?) John Denver into rewriting that skit and, after some "comedy," he relents. 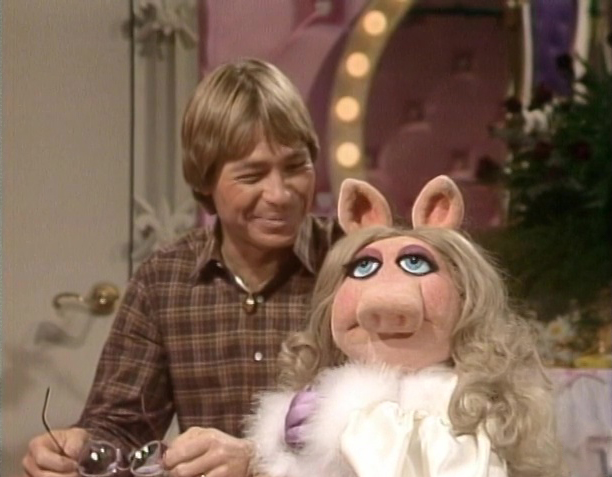 Shady backstage deals in a pig's dressing room.  Christmas!
The new musical number involves John Denver as an inept wooden soldier going off to toy war, while his sweetheart, a dolly played by Piggy sings "I Will Wait for You," (i.e. the song that plays at the end of the Futurama episode about Fry's dog, which is a far better use for the song).  And that's it.  The wooden soldier dance number is cute, but it makes what is already a cheesy special even more corny and awkwardly paced.  The only original aspect of the special that I enjoyed was the retelling of the Nativity, which involves Henson-approved puppets of Joseph, Mary, and baby Jesus. 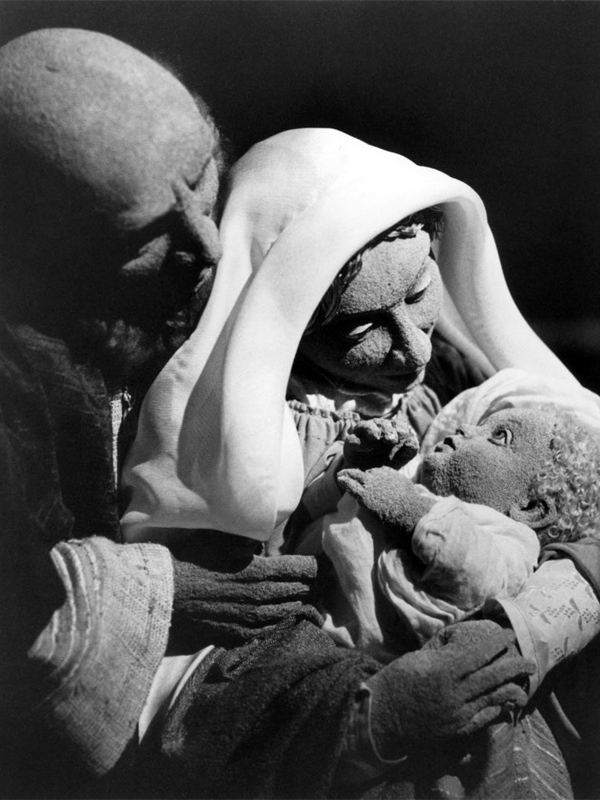 The most dignified use of foam and felt.
The rest of the album, on the other hand, is a treasure trove of extra Christmas magic.  After the cast sings a standard version "Deck the Halls" (which will be covered in a later special with superior results), each remaining song is a classic.  Robin the Frog and Denver sing "When the River Meets the Sea" from Emmet Otter's Jug-Band Christmas.  The Electric Mayhem covers the Beach Boys' "Little St. Nick," reminding us how under utilized they were in the show.  And finally Denver sings "Noel: Christmas Eve, 1913" which is just hauntingly beautiful.  Yes, the album really came out ahead.

The liner notes and art for each song.  Click to enlarge, as each image is lovingly crafted.
So it seems as if the album is the winner.  As a complete product, it is slicker and wonderful from start to finish.  The television special has its moments, but since the best parts are taken from the album, one is ensured greatness in the original soundtrack.  Both try to maintain a relationship between sentimentality and humor, but the album leans more towards the former, allowing the comedy to remain natural and subdued.  The Muppets expertly showcase their respect towards the holiday, without the need to overact or make jokes.  John Denver & The Muppets: A Christmas Together is a fine addition to the yuletide musical canon, and it can warm any home in which it is played.
Finally, let us close out the post with one last moment where the album prevails.
May our stomachs be filled with figs.  And bacon.
Posted by John H. at 9:47 PM

Email ThisBlogThis!Share to TwitterShare to FacebookShare to Pinterest
Labels: a christmas together, christmas, john denver