March of the Puppets

As the Muppet cast grew over the years, the diverse population of animals made for a collection that would rival that of the San Diego Zoo.  However, there were a few species that The Muppet Show showcased more frequently than the others.  These creatures were used so often that their new characteristics became the norm.  We have come to expect a Muppet pig to behave like an arrogant human, a Muppet rat to be bug-eyed and swift, and a Muppet chicken to possess amazing musical talent.  But the species that seem to have been made for The Muppet Show are the penguins. 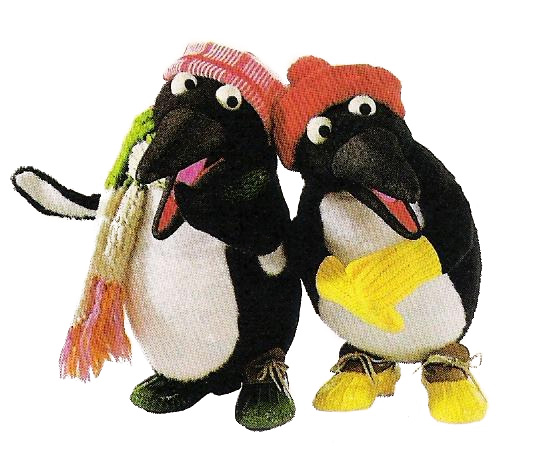 The South Pole was too cold for them.
Unlike pigs, rats, and chickens who at least had some main characters to represent them, the penguins were always a group, each member indistinguishable from the next.  They rarely spoke, preferring to communicate through a series of quacks.  Each seemed to be imbued with the exact same personality, fun-loving and energetic.  The first penguin to appear was named Winky Pinkerton who could talk and do "impressions" of other birds. 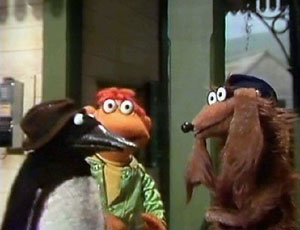 And he wore a little hat.
But this puppet design was too bland for a new character, and Winky never reappeared again (as a specific individual).  Besides, how often is a show set in the northern hemisphere going to use a penguin?  This one note bird seemed destined for the storage trunk.  That is, until it was decided to give every puppeteer his own penguin to use in background scenes and singing back-up, even if the location was unfit for Antarctic or avian participants.  I mean, especially if the location was unfit for them.
Groups of the birds began appearing everywhere, due to the sheer fact that they were instantly amusing to watch.  The first puppet was designed with a flexible head like the other Muppets, but the new ones were crafted more like the actual animals, with stiff necks and beaks.  These, combined with the flightless birds' waddle created a new style of movement that the other characters did not possess.  The structure and absurd qualities of the perpetually-tuxedoed penguins meant that what every they did, they would be crowd pleasing.  There was no need to separate them into individual characters. 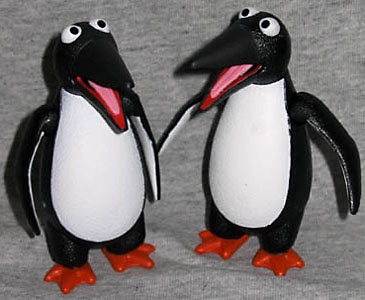 Even the action figures are packaged as a pair.  You can't have just one Muppet penguin.
The fact that any puppeteer could toss one on and quack for a bit meant that they became the universal standard for a cute funny punchline.  As Brian Henson noted of his father's tendency to write sketches without planned endings, sometimes the best thing to do would be that "you either blow something up, or you eat something, or you just throw penguins in the air."  He took this to heart when he directed his first movie.
Eventually, penguins became the go to "extras" in the Muppet universe.  Whenever a large group was required, more penguins were thrown into the mix.  If there is one thing Henson has taught us, it is that there is no such thing as too many penguins.
Currently, a set group of animatronic penguins known as Nicky Napoleon and his Emperor Penguins make up the pit orchestra for Muppet*Vision 3D.  They first appeared in the short-lived Little Muppet Monsters providing the background music and performing other technical tasks.  While the original show failed, the penguins were fortunate to live on, threatening the safety of Disney Parks visitors daily. 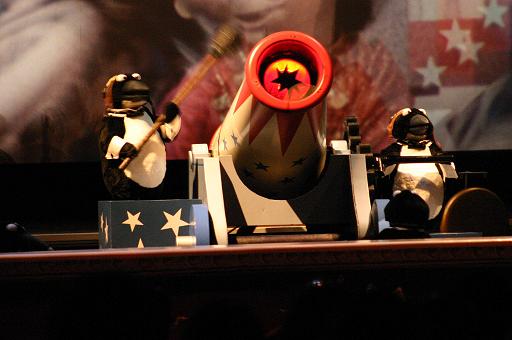 What's black and white and red, white, and blue all over?
The penguins are the universal Muppets.  No matter what your background, they create comedy that appeals to all.  Their flapping beaks and flippers can bring a smile to anyone's face.  And according to the Muppeteers themselves, they are as fun to perform as they are to watch.
Posted by John H. at 8:51 PM