The history of advertising is closely linked to the mindset of the average consumer.  Early advertisements appealed to the public through the written word (and maybe a nice picture) to inform the audience about the product.  The claims may have been exaggerated or false, but the focus was always purely on whatever was trying to be sold.  As ads reached film, attempts were made to create visual and auditory memories, so that the consumer would be reminded of the clever premise or catchy jingle when strolling down the aisle at the supermarket.  It is during this era that mascots took off.  Characters came to life on the screen, existing only to shill their wares.  We have seen how Jim Henson's early commercials involved a clever send up of scare tactics used to sell items (by having his characters overtly threaten the consumer).  But his next target would be the concept of mascots themselves.

Advertising mascots only have one job: to represent their product in a positive light.  While mascots that hate the product are popular (such as the Geico cavemen or the adults who just don't understand why kids like Apple Jacks when they don't taste like apples) they do not besmirch the name of their company in the process of their antics.  Doing so would just be clumsy advertising. 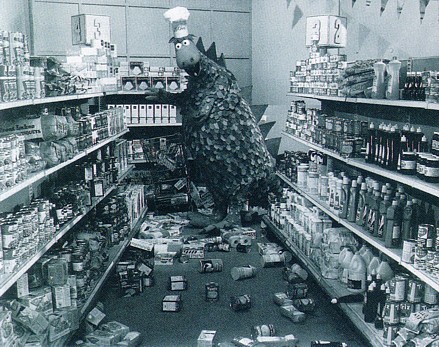 Oops.
When the makers of La Choy Chow Mein contacted Henson to make a mascot for them, he obliged.  When they asked to make it a fire-breathing dragon, he had a field day.  Delbert the La Choy Dragon was an over-zealous, lumbering beast who LOVED La Choy products.  Unfortunately, in his excitement, he failed to notice his surroundings.  Like Godzilla, destruction followed this dragon wherever he went.
Unlike most mascots who are welcomed with open arms by the human characters, Delbert would frighten and endanger all those he encountered.  All the while, he would be completely oblivious to the chaos he left in his wake.  This satire on advertising comes off as very post-modern.  Ads like the one above would not feel out of place today.  In fact, it would fit in quite nicely with modern Super Bowl commercials.  But for the '60s, this kind of behavior was unheard of.
In pitching this character to advertisers, Henson knew that he would have to appeal to the producer's funny bones.  He made up a short reel, explaining the concept, all while poking fun at his own image (as well as those of the Muppets).  He knew that his stuff was weird, but it was the kind of weird television needed.  Even in a short few minutes, it is clear that he was passionate about this character, and he was especially proud at creating a new piece of technology that set the dragon apart from any puppet that had come before it.
Fire.  A puppet that could breathe fire.  Such an idea was unimaginable.  But Henson made it.  And he ran with it.  In every ad, showing the flame for one second just wasn't enough.  Everything else had to burn.  The food, the kitchen, the entire sets.  Henson was allowed to play with fire, and he was going to have fun with it. 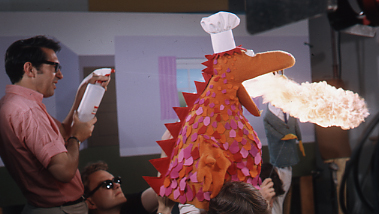 All while poor Frank Oz had to suffer inside the suit.
Like all of Henson's mascots, the La Choy Dragon eventually disappeared along with the product.  It is a shame that Jim did not get more opportunities to play with this character.  The unbridled passion combined with his tendency towards dangerous spectacle made him the perfect Henson character.  This anti-mascot was too good for his time, but he will forever be one of the best.
Posted by John H. at 8:18 PM