On December 3rd, 1978, Christmas Eve on Sesame Street premiered on PBS.  This wonderful special brought all of our favorite characters together to spend their first Christmas with the American public.  Cute kids, great songs, and tender moments were showcased as Big Bird and his pals awaited the arrival of Santa Claus.  The level of maturity and entertainment we had grown to expect from the show was all present.  It had everything one could possibly want and need out of a Sesame Street Christmas special. 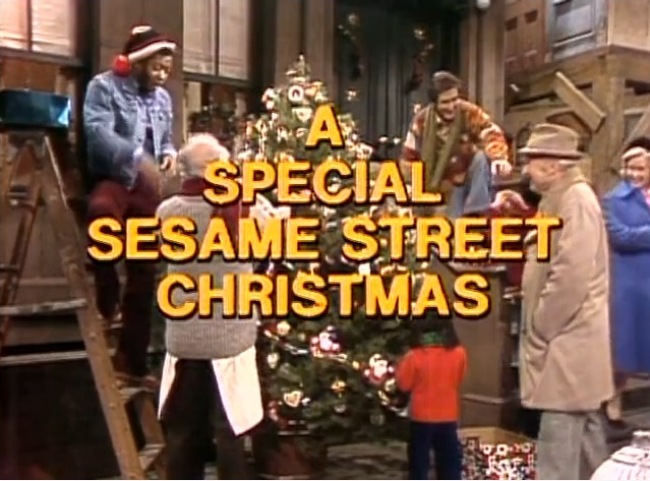 You keep using that word.  I do not think it means what you think it means.
Um....what?  We just had a Christmas special on Sesame Street five days ago!  Was it a repeat?  Was it a sequel supposed to take place the day after the first one?  Was this some sort of mistake?  Unfortunately, it was none of the above.
The executive vice-president of the Children's Television workshop at the time decided to allow CBS to produce it's own Sesame Street special on the grounds that having two in production would result in at least one making it to air.  As if the popular kids show needed such help.  What resulted was a low-budget special with forced lessons, a weak story, and enough overacting B-list celebrities crammed in to make the viewers at home appreciate their ability to turn of their television.  Barely half of the human cast even appeared in the special and only three puppets were included: Big Bird, Oscar, and the dog Barkley.  While CEoSS was an ensemble show with multiple stories and opportunities for each character, ASSSC was going to be all about Oscar. 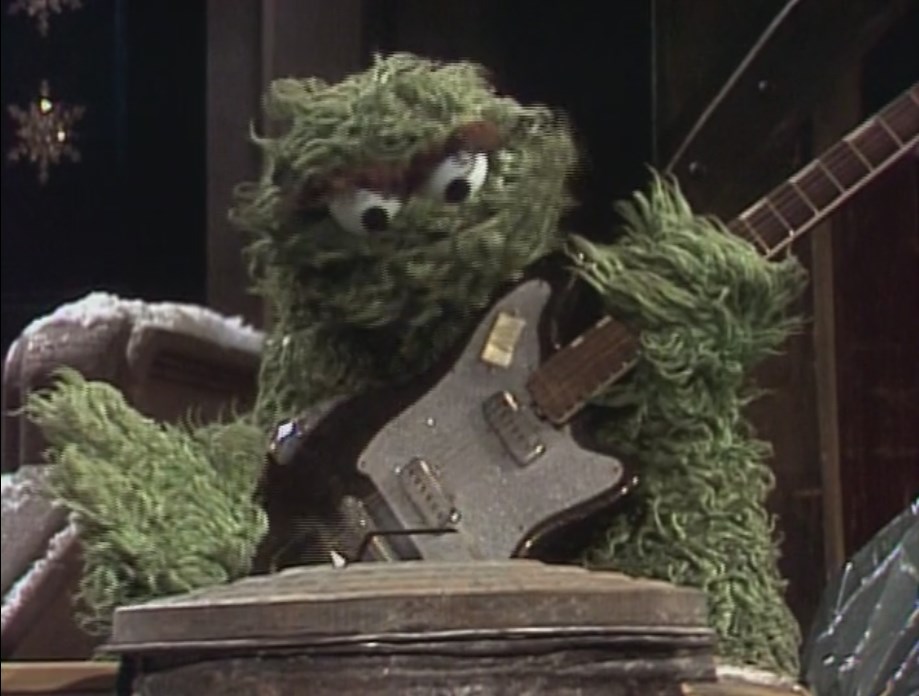 Pictured: Oscar performing a rotten version of "Yakkety Yak."  Not pictured: Entertainment.
Now, there are many great Christmas specials that focus on unpleasant characters.  The Grinch, Scrooge, and Billy Bob Thorton are all classic Christmas villains with great Christmas stories.  And Oscar is a great character who is a lot of fun to watch.  But the problem is that Oscar's personality is set in stone.  Having the plot focus on him changing his anti-Christmas ways means the whole show is ultimately pointless.  Even if Oscar has a change of heart by the finale, he's not going to be all friendly and chummy in the next episode of Sesame Street.  So what we get is an hour of grouching, followed by a minute of "I guess Christmas is okay."  Plus obnoxious musical numbers and pointless cameos.
Oh, the cameos.  Let's just take a look at our all star cast:
Anne Murray as the Ghost of Christmas Past 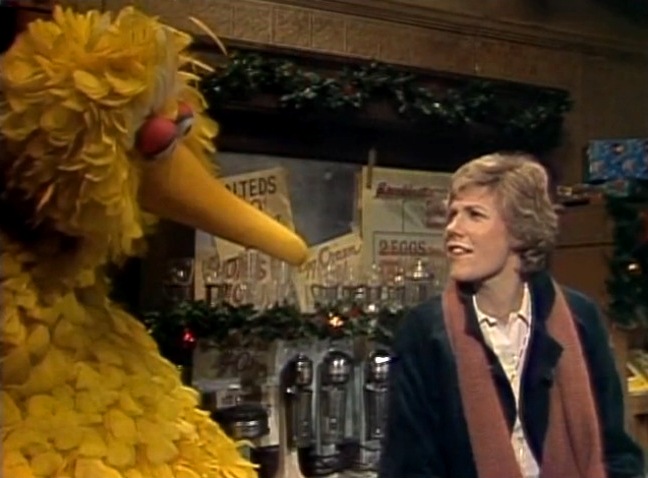 Imogene Coca as the Ghost of Christmas Present 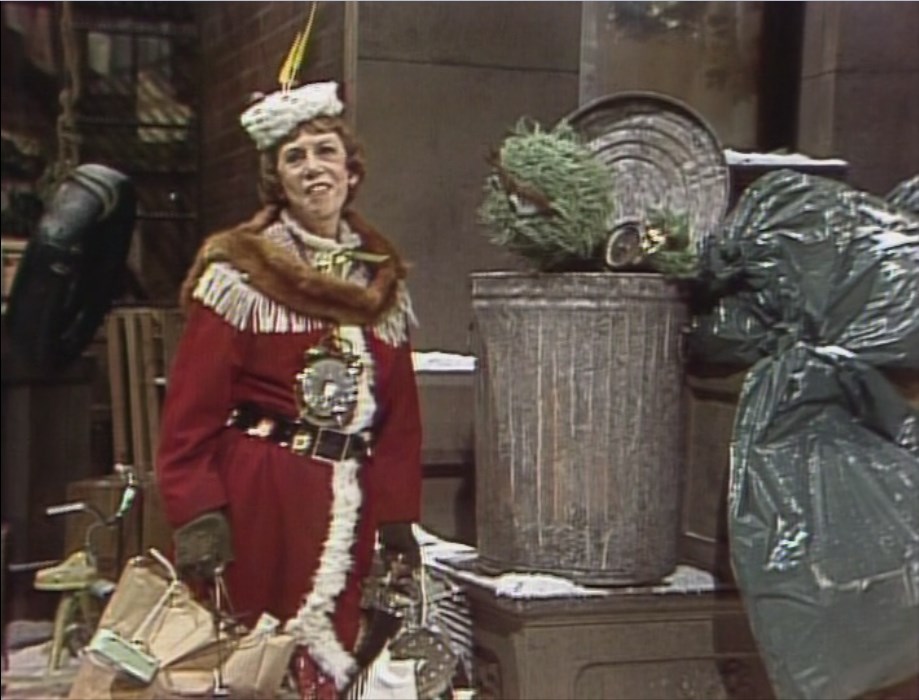 Dick Smothers as the Ghost of Christmas Future 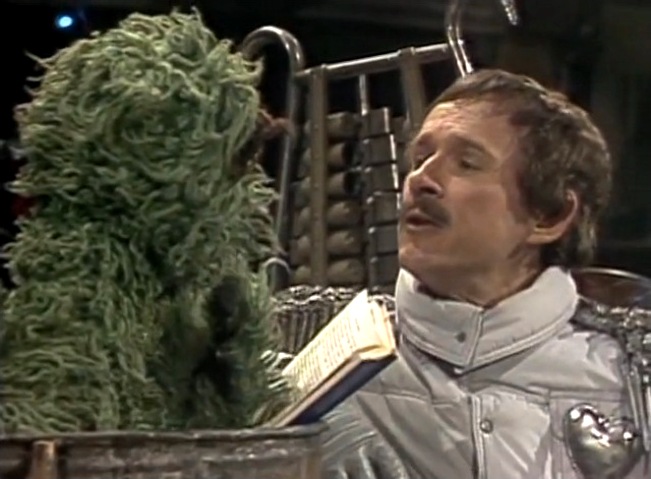 Ethel Merman as herself, singing "Tomorrow" (which is just the worst) 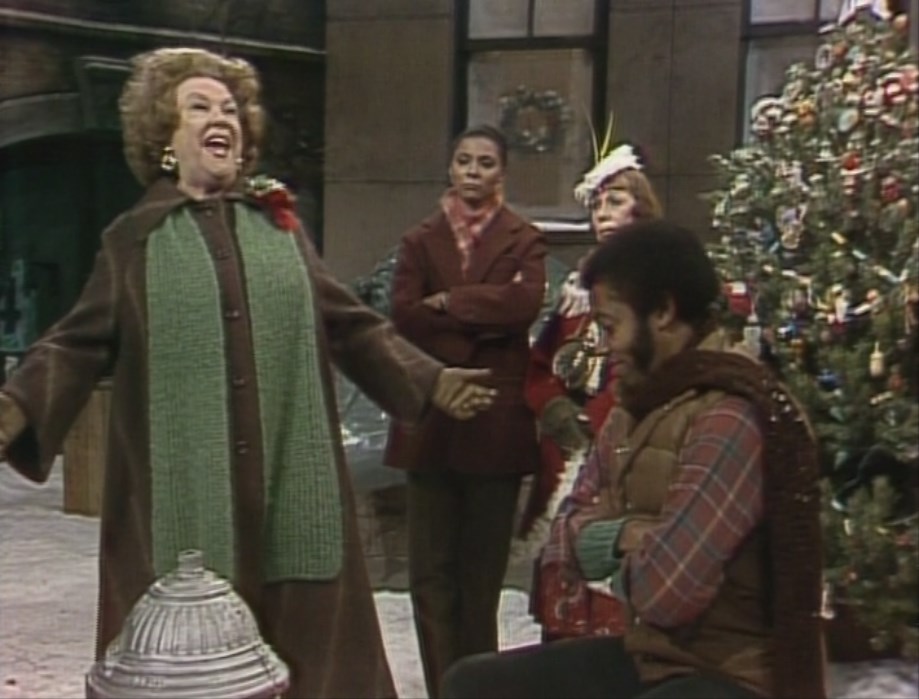 And Henry Fonda for one line, because why not? 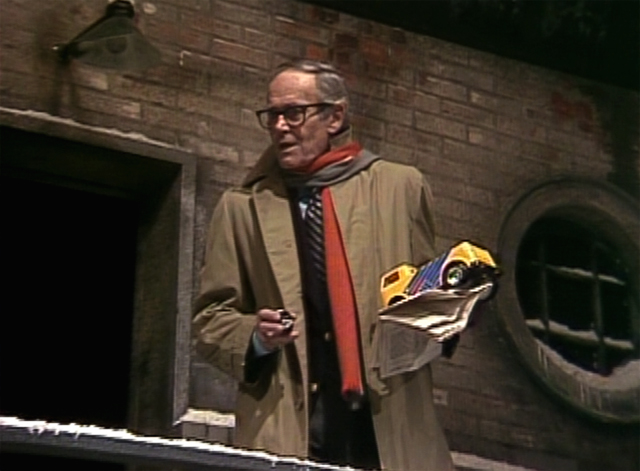 I know!  All of your favorites!
If you haven't guessed by the great outfits, the plot is loosely based on A Christmas Carol.  Special guest star and host Leslie Uggams(!!!) decides to change Oscar's negative attitude by pulling the ol' "let's dress up as ghosts and recreate scenes from Oscar's life" routine.  However, Oscar sees right through the visions saying that he was never pleasant and has always hated Christmas and always will.  The ghosts still scare him though, prompting an appearance by the future King of Pop himself, Michael Jackson!
Don't worry, he doesn't sing at all!  There's no reason to suddenly make this special bearable!
At the center of it all is a crippled alley cat who is named "Tiny Tim" of course.  The adults urge Oscar to share his food scraps with the cat, but Oscar refuses to help.  It is not until he sees the "future" where the cat dies that he decides to change his ways.  I should probably mention that this cat clearly does not want to be involved in this horrid special, as it meows in fear whenever it is placed near Oscar. 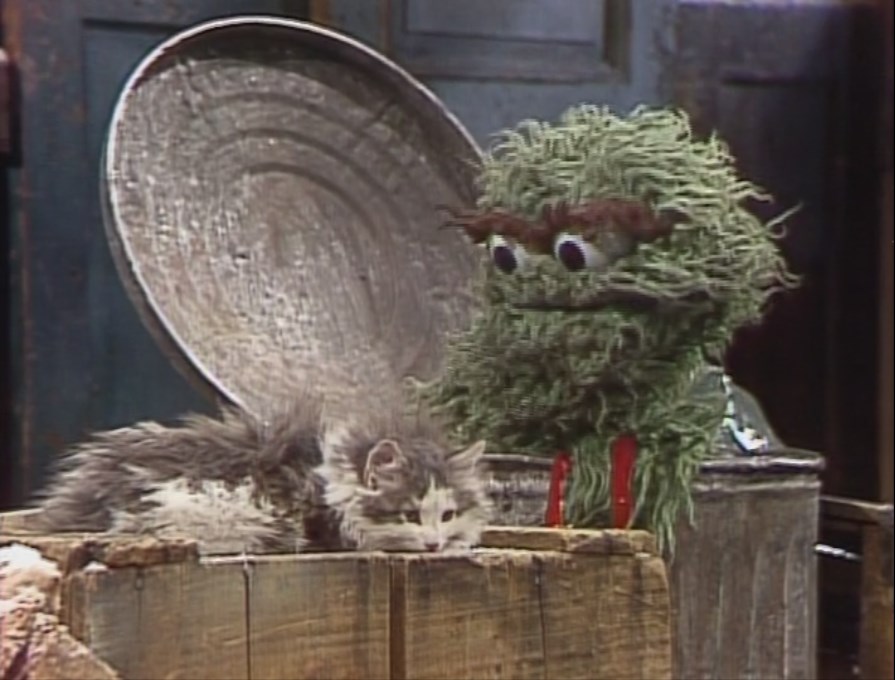 If my leg weren't in a cast, I would be out of here so fast.
There is an interesting moment where Oscar starts complaining about the amount of Christmas-related garbage that has been piling up in his can.  Maria is shocked to hear Oscar badmouth trash to which Oscar replies, "I said this was Christmas trash; I didn't select it!"  Here, he is unintentionally commenting on the special itself.
Christmas specials come in many forms.  Those that the public deems worthy get to be repeated year after year.  Each new generation gets to enjoy them just as their older relatives did as children.  But then there is the Christmas trash.  The quickly-made specials hoping to capitalize on the "spirit of the season" without really understanding what made the classic specials work.  They lack the charm, weight, and wit of those that came before them.  On a basic level, the audience will recognize the images and motions that these specials go through, and they may endure them once, but there is nothing for them to hold onto, waiting for them to see it again the following year.  A Charlie Brown Christmas, for example, has become a staple of the Christmas season, merely because it is so different from the others around it.  It maintains a quiet elegance that just paints a picture of a calm pleasant Christmas as a child.  A Special Sesame Street Christmas just fails on many levels.

If you think you can endure the mediocrity, you can watch it here.
The usually bright and lively Sesame Street set seems dark and dead.  Christmas and non-Christmas songs are thrown together at random.  Celebrities appear without explanation and disappear just as suddenly.  The storyline has been done to death and nothing new is added to make it feel fresh.  Only a handful of regular characters appear, and they do not contribute much to the plot.  The fact that Jim Henson, Frank Oz, or any of the rest of the puppeteers were not involved is a big red flag.  The host Leslie Uggams does not warrant the amount of screen time she receives, delivering nothing but boring dialogue and exposition.  Oscar is the only character given enough time to develop and at least he provides humor with his constant complaining, allowing his viewpoint to be felt deeply by the audience at home.  But at the end of the special, I just ended up hating Christmas.  Whoops!
But the worst part is that it followed an absolutely marvelous special by a mere five days!  I could not imagine being a child during 1978, having just watched Christmas Eve on Sesame Street and getting all into the Christmas spirit, only to have it shot down by this insulting mess.
As much as I promote deeper meanings in all works of art, especially at Christmastime, sometimes you can't help but end up with a load of rubbish. 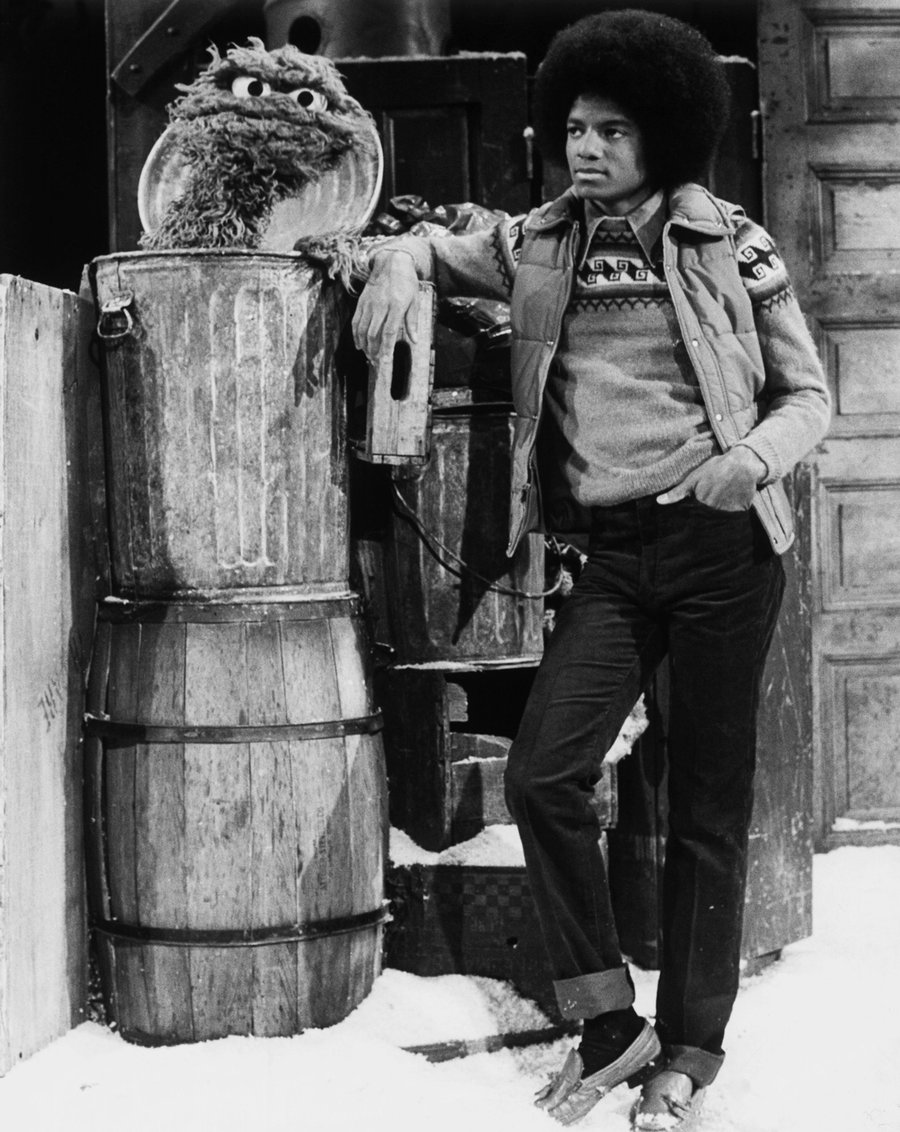 The only good thing to come out of the show was this bitchin' photograph.
Posted by John H. at 11:34 PM