With one final stop on the ghostly journey, Scrooge arrives at the graveyard.  Although he knows that he will most likely see his own grave, he pleads with the Ghost, asking if it is at all possible to change the future.  Caine really gives it his all during this final monologue, and the techniques he uses to stall the inevitable are charming in their own gloomy way (especially when the Ghost remains fixedly pointing at his grave, and Scrooge tries to misread his signs and starts heading towards another grave, hoping that maybe there is one last escape from all of this).  But eventually, he must face the truth. 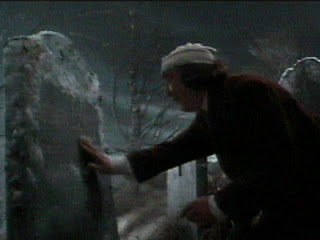 An existential moment for Ebenezer Scrooge.
Fortunately, Scrooge is returned to Christmas morning, having a chance to right all of his wrongs.  He sets things right, first by hiring the homeless Bean Bunny to assist him in his daily errands. 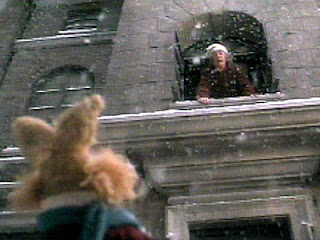 Why, it's Christmas Day!
Scrooge heads outside and spends the day buying gifts and food for everyone in town that he had earlier neglected.  And finally, after the whole movie, Scrooge gets his own song "Thankful Heart," which allows him to show off he newly reformed ways.  He is now one with the Muppets.
At the end of the day, with everyone in tow, he surprises the Cratchit family by raising Bob's salary, presenting them with a feast, and becoming a second father to Tiny Tim to make sure he lives a long, healthy life.  He then leads everyone in the final song "When Love is Found," (which is supposed to echo the song that had been cut earlier, "When Love is Gone"). 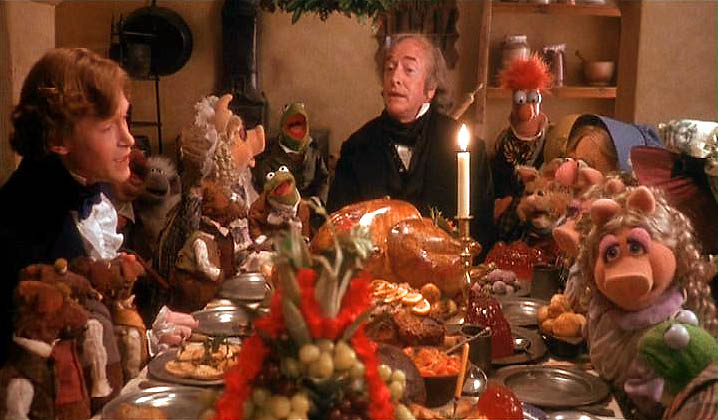 God Bless Us Everyone
And there we have The Muppet Christmas Carol.  So, how does it rate overall?  Let me break it down.
Michael Caine is NOT the best Scrooge.
To be fair, he is not really given that much of a chance.  The focus of the movie is on the cast of characters that surround Scrooge, leaving him to be mostly an observer.  The Muppets really steal the show.  Caine sticks mostly to the usual interpretations of the character, having him come off as rather dull compared to the puppets.  The best Scrooge portrayals have been those who fully embody the miserly skinflint, making him despicable and removed from society, yet also have him believably transform over the course of the film.  Those who can be both absolutely terrible at the beginning and completely lovable at the end are the masters of playing this character (i.e. Alastair Sim).  Caine is a great actor, but he maintains a certain level of charm where we cannot really see him as an unlikeable character.  He just goes from blah to exciting.
Michael Caine IS the most vulnerable and sympathetic Scrooge.
What makes Caine's Scrooge enjoyable is that we are able to see exactly how each moment touches him personally.  A lot of Scrooges keep their emotions bottled up, even during the scenes where they are supposed to be deeply affected.  Because Caine never really starts as an unlikeable person, we are more willing to see him as a wounded puppy, mistreated and misunderstood.  That works for this movie for children, allowing them to care about an old man as the central character.
This is NOT the best Muppet movie.
I'm sorry.  It's impossible for the best Muppet movie to be one without Jim Henson.
This IS a great Muppet movie, though.
Brian Henson and the rest of the Muppeteers do a wonderful job at carrying on Henson's legacy.  The Muppets remain grounded, yet are able to become silly when needed.  The Fezziwig scene, in particular is like an homage to The Muppet Show.  Kermit, Piggy, Robin, and Gonzo all turn in great performances, perhaps the greatest performances of their careers (and it's nice that they are each played by the four remaining Muppeteers from the original group).  This movie has proven that even without Henson and Hunt, the Muppets can live on.  It just goes to show how well the characters were created that they can live on beyond the lifespans of their creators. 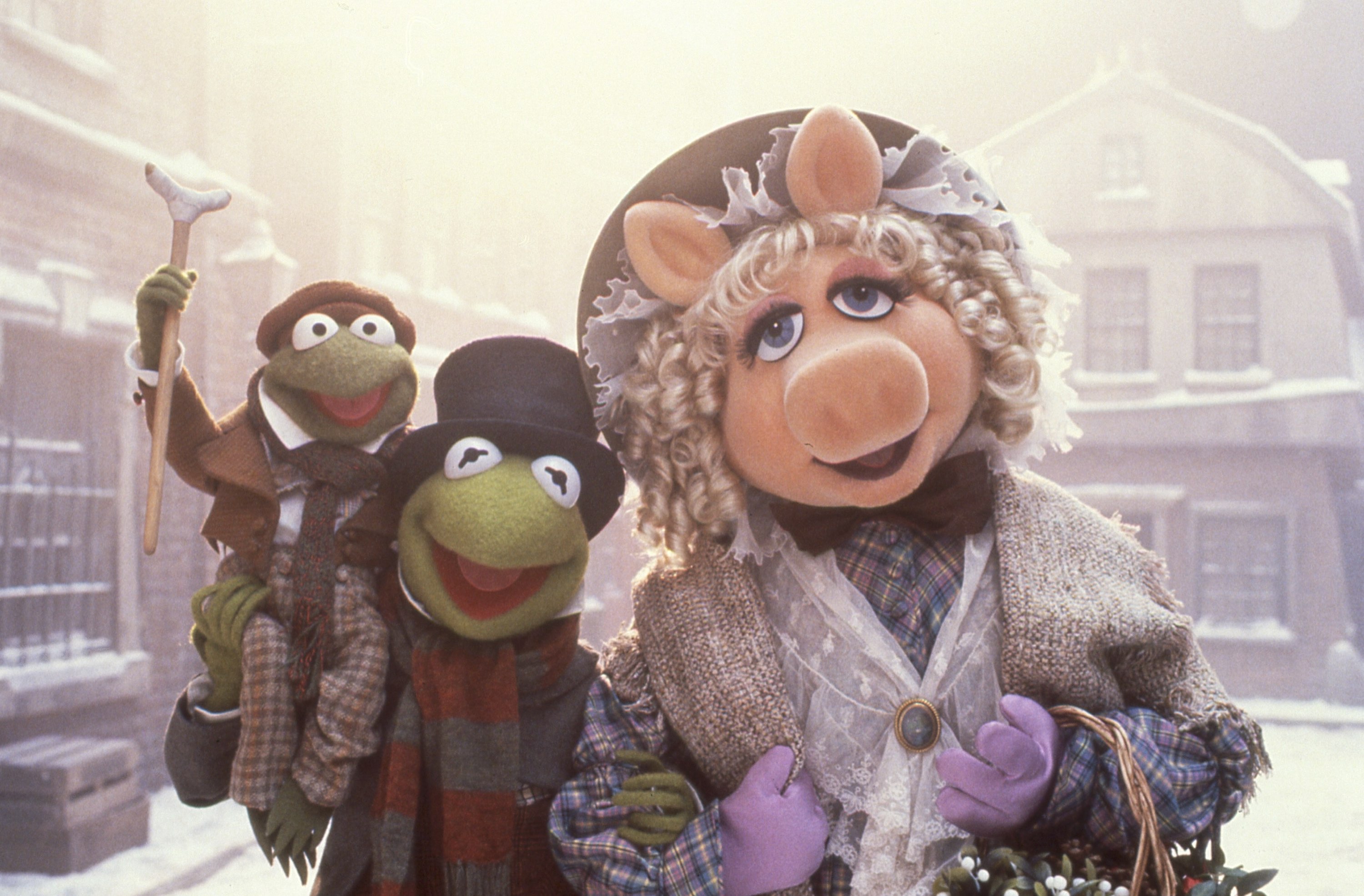 The Cratchit family, beautifully portrayed by amazing plush actors.
This is NOT the best version of A Christmas Carol.
The story is rushed and compacted to make room for songs and to allow the Muppets to do their familiar routines.  Some characters are bizarrely interpreted.  The main focus is humor rather than a strict conformity to the source material.
BUT it is the best FAMILY version of A Christmas Carol.
Because the story is so well-known, children are going to be exposed to it eventually.  The book is not children's literature and most adaptations weigh heavily on the drama and the references to regret about the past, something children would be unfamiliar with.  Out of all of the versions that are clearly marketed towards children, this is the best.  Most are short cartoons that only hit the main points without time for the audience to reflect or learn.  Others are very scary and intense.  This one strikes that delicate balance where adults and children alike can appreciate the story and the comedy.  It is one of the most enjoyable versions out there.
The music is WONDERFUL.
You cannot go wrong with the Muppets' go to composer Paul Williams.  It is a shames so many songs had to get cut from the movie because they are all great additions to our Christmas music lexicon.  I am not sure whether this is the best musical version (seeing as how the 1970 musical has some great tunes) but it is certainly consistently great the whole way through.  The spirit of Christmas is given a Muppety feel with each number.  (And it is definitely much better than The Stingiest Man in Town.)

A great album to accompany John Denver's A Christmas Together.
And last, but not least...
Gonzo IS the best Charles Dickens.
If there is one thing that makes me the most excited when watching this movie, it is knowing this guy will be there to guide us along: 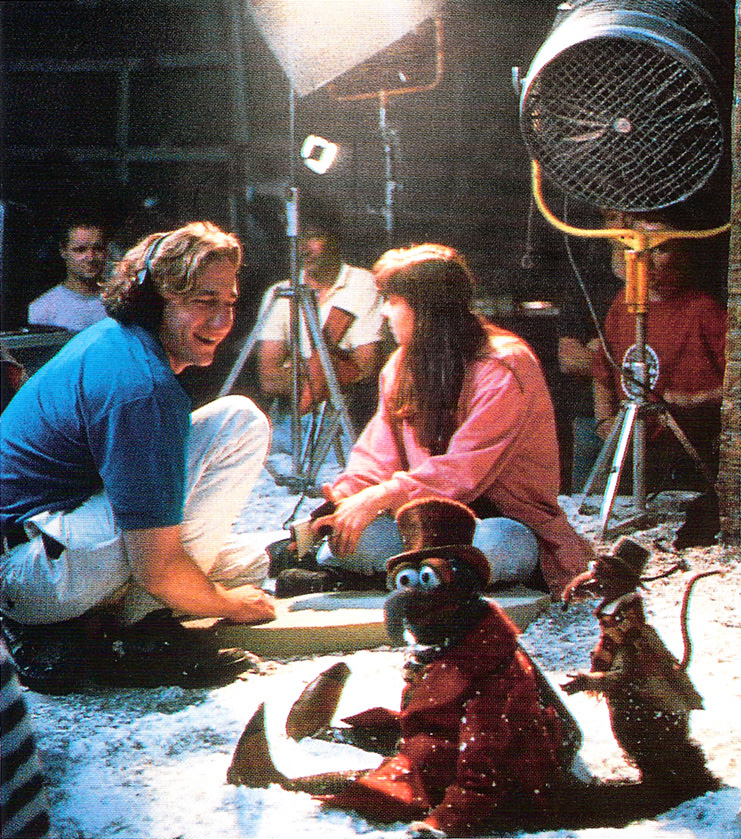 It would be a great version even if Gonzo were the only Muppet in it.
Overall, I have come out liking this movie a lot more than I previously had.  I would recommend it to anyone, and will definitely be showing this to future generations.  But I implore you to check out other adaptations as well.  Many people have given their own unique spin on the tale and many are worth a look.  Even this movie is aware that it is not the definitive version of the story.  To quote Gonzo's final line, "If you liked this, you should read the book!"
Posted by John H. at 5:03 PM