'Tis the Season (for Shopping)

When Dinosaurs set out to create satire, the results were almost always successful and charming.  These satirical episodes were so perfectly crafted, that it seemed as if they were destined to exist.  By placing the show in the far, far past, we were able to "witness" the birth of modern concepts that we take for granted.  So when it came time for the "Christmas" episode, it was a tough line to walk.  What could be said about Christmas that hasn't been said (or parodied) countless times before?

Now, wait a minute.  Every Christmas special is about the evils of commercialism.  And in the end, Charlie Brown or whomever will reveal the true meaning of Christmas.  That its not about presents or spending, its about family and love.

Good thing the dinosaurs didn't grow up with the same specials we did. 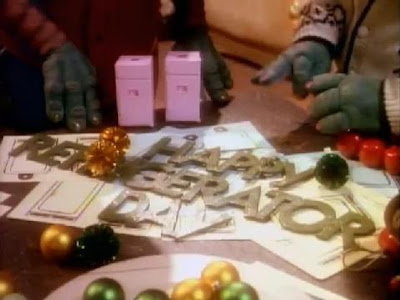 And also, Christ wasn't born yet...

During the winter, the citizens of Pangaea celebrate "Refrigerator Day" which celebrates the miracle of refrigerators (a.k.a. the invention that allowed dinosaurs to become domesticated and no longer migratory).  Taking some pages from a few different holidays, Refrigerator Day features two days of fasting before the big feast (where all the leftovers get eaten), pageants telling the story of the holiday's origin, and presents, presents, presents!

Earl, excited for the upcoming Refrigerator Day, spends all of the family's money on presents, expecting a holiday bonus from work.  Of course, Richfield being Richfield denies him the bonus, crushing Earl's spirits (and his wallet). 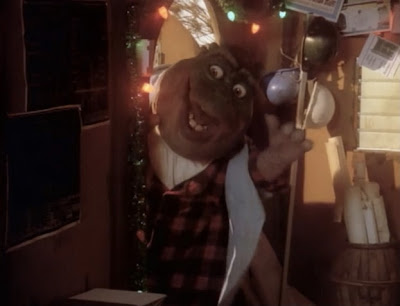 Pay no mind that the Simpsons Christmas special began the exact same way.

The repercussions are swift as the repo men come to claim the Sinclairs' fridge (since the payments are half a day late and it is poetically much more meaningful this way, according to the boss). 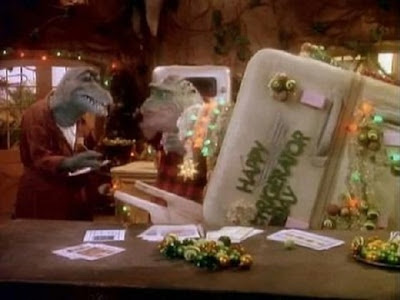 You can't have Fridge Day without a fridge!

Earl sinks into a deep depression and contemplates hanging himself in the garage.  Christmas!  The family decide that, although they love presents, they need to get their fridge back and the gifts must be returned.  Except, the concept of a return policy hasn't been invented yet (this is prehistory, remember?) so the store doesn't know what to make of their request.  They ultimately agree to buy back the gifts at a much lower price, allowing the family to purchase a styrofoam cooler. 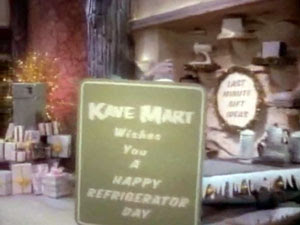 Even 60 million years ago, K-Mart made children cry.

The family try to keep their spirits up and reenact the first Refrigerator Day via family pageant.  As they assume the roles of dino-pilgrims, they sympathize with the early reptiles, who had to go without food for days on end.  In a delightful handwave, the actual inventions of the refrigerator is never really explained.  One day, a box was made and it happened to have a plug on it, so it could be plugged in to make food cold.  No mention of how the box worked, no hint as to where the electricity came from, just an unquestionable miracle.

But then, in true television fashion, the Sinclairs receive their own miracle!  The Kave Mart salesmen arrive to return the fridge because their boss liked the idea of a return policy so much that he needed to say thank you.  And gifts just keep getting better and better (or at least more absurd).  The store also lets them keep their presents!  And they managed to get Earl his holiday bonus!  And they brought ice cream!  And attached snow machines to the house to make it snow!  This delightful mockery of Christmas special endings is undercut by the revelation that the Kave Mart employees are distracting the Sinclairs so they can sign away the rights to the return policy idea, but who cares?!

It's Refirgerator Day and everyone should be happy! 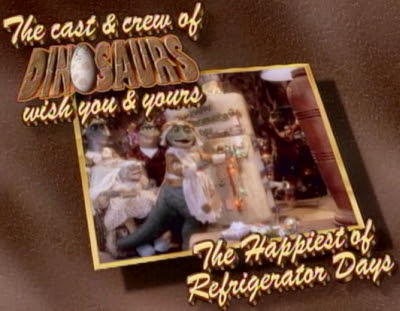 Yay!  No one missed out on becoming millionaires!

The entire "Refrigerator Day" episode is packed with biting commentary on the hypocrisy that exists in Christmas specials.  For as much as specials try to denounce commercialism and greed, they are still promoting the month-long spendfest of western civilization.  Think about that as you hang up your Charlie Brown ornaments or put out your Grinch snow globes.  You can't escape it, so you'd might as well embrace it.
Posted by John H. at 7:53 PM