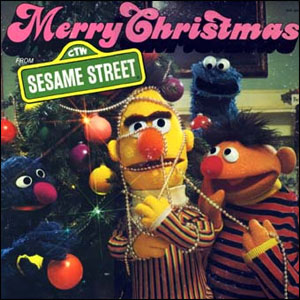 How did Bert even get into this mess?

For fans of the 1978 special, a lot of familiar elements appear on the album.  Oscar sings "I Hate Christmas," the cast sings "Keep Christmas With You," and Bert and Ernie's Gift of the Magi scenario actually originates here.  But this does not detract from the record (or the show) at all.  It still has an old-fashioned charm.  So whether you're hearing the "Sesame Street Christmas Overture" on the album or on television, you can rest comfortably knowing that good times are ahead.

There is the usual Christmas fare, with the cast singing as many Christmas tunes as they can possibly fit onto one record.  There are even TWO medleys of carols just to make sure nothing is missed.  So, fans of Sesame Street and Christmas are certainly getting their money's worth.

So what's unique to the album?  Well, Maria and Luis sing "Saludo (Aguinaldo)," a Puerto-Rican Christmas song about family celebration and "Arrurru," a Spanish lullaby that...doesn't have anything to do with Christmas but it's pleasant.  David sings a modernized version of "The Night Before Christmas," in which he lets Santa borrow his sled to deliver presents.  But the centerpiece of the album is "A Christmas Pageant."

Bert must suffer through being the tree in the Christmas pageant and, like any good radio play, no visuals are needed to get the vivid story across.  Like Christmas Eve on Sesame Street, there is no grand plot.  No one needs to save Christmas or learn the true meaning of the holiday.  It's just all of our friends, coming together, singing familiar songs and partaking in their traditions.  This album is like an audio version of A Muppet Family Christmas.

It doesn't need to be groundbreaking.  But it needs to be reliable.
Posted by John H. at 4:35 PM