The Muppets, Part 4: The Greatest Show on Earth!

Gary returns to the motel room with a bouquet of apology roses to find Mary gone, with a note left behind asking him is he a man or is he a Muppet? Then the film becomes amazing.

"Man or Muppet" is the Oscar-winning centerpiece of the movie, at it almost feels as if the whole film were created for this moment.  Although the official music video above has interruptions from other bits of the movie, it's still a great number.  It is through this song that the distinctions between men and Muppets are drawn, and Gary decides he's "a Muppet of a man" while Walter is a "very manly Muppet," reinforcing the earlier notion that Gary is more unrealistic than Walter. 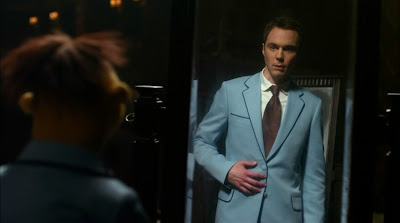 Apparently, Michael Cera ad Paul Rudd were considered for this role.  But why mess with perfection?

Gary heads back to Mary in Smalltown while the Muppet Telethon is about to kick off.  But unfortunately, there is no audience! 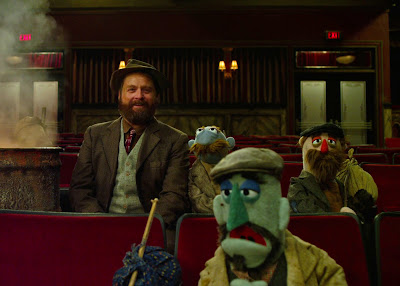 Why does everybody forget about Hobo Joe?

Nonetheless, they kick things off with the Muppet Show Theme, and seeing it recreated on the big screen reminds us that miracles can happen if we are Jason Segel.

Yes, some of the original puppets are missing, but that makes the whole thing feel a lot more authentic, as if the Muppets really were getting back together for a reunion and due to various circumstances, not all could attend.  For the next 15 minutes, we are treated to a truncated version of The Muppet Show and even though it is "updated" it feels like we never left. 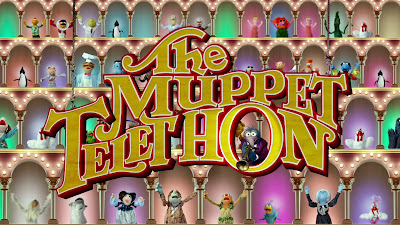 The movie could have just been this for 2 hours.

When I first watched the movie, I was a little disappointed that Jack Black was the special guest star.  Mostly because it was so obviously telegraphed with his earlier appearance, but also because when I think of "classic Muppet Show guests," I think of comedy legends like Steve Martin, John Cleese, or Bob Hope.  Jack Black is fine, but he is not quite a legend.  Of course, they needed a modern celebrity comedian and Black can deliver on that count.  Upon rewatch, I find is presence to be more enjoyable, especially how he is used within the Muppet acts against his will. 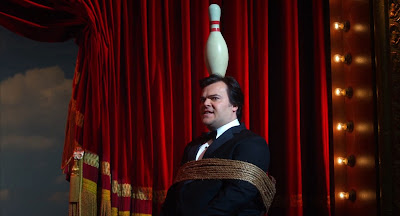 As long as he's being tortured, he can stay.

While the show relies on some classic acts, like Fozzie's horrible comedy and Gonzo's stunt act that goes awry... 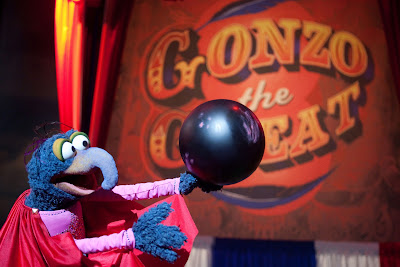 ...the movie attempts to show us some new acts, depicting what the show would have been like had it stayed around for decades.  Case in point, two controversial song covers.  The first is Nirvana's "Smells Like Teen Spirit" sung by Rowlf, Sam the Eagle, Link Hogthrob, and Beaker as a barbershop quartet.  The whole premise just doesn't work...which is why I love it.  The Muppet Show always presented us with the unexpected.  Why would the movie be any different? 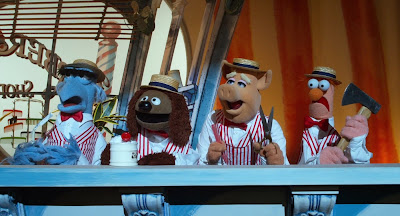 Plus, you can't go wrong with the FOUR BEST MUPPETS EVER!

The second song unfortunately doesn't have that same pizazz.  Camilla and the Chickens cluck out Cee Lo Green's "Forget You," possibly because Cee Lo is a Muppet of a man himself (and he had earlier that year performed the song with some Muppety assistance).  But despite the initial "shock" value of the Muppets covering such an expletive-laden song, this doesn't really extend beyond the novelty.  Musical chickens are a staple of The Muppet Show, but this is just one of those moments that instantly dates the film. 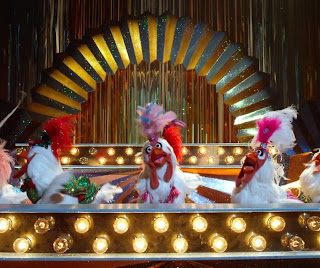 Plus they missed out on a wonderful opportunity for the phrase "Cluck You!"

Meanwhile, more audience members are arriving to see the show, celebrity cameos are padding out the phone banks, and the donation total keeps rising and rising.  There to put a stop to things is Tex Richman who cuts the power to the theater, which is then remedied by Gary and Mary (who decide that their story is over and can help the Muppets again). 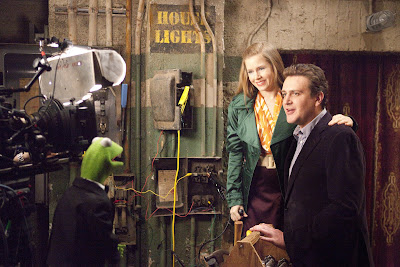 But most importantly, Uncle Deadly is getting his moment in the sun.  Richman attempts once more to shut down the theater for good and Deadly has a change of heart, embracing his Muppet origins and tossing Richman off the roof.  For most audience members, this was probably a "Huh? Who is that guy again?" moment, but for an Uncle Deadly fanboy like me, this was the greatest, most unexpected thing I thought I would ever see out of a modern Muppet movie.  Heck, out of ANY Muppet movie! 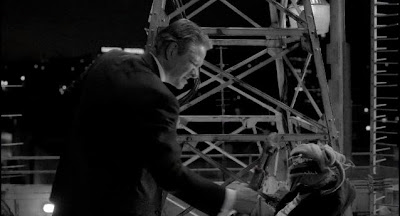 Back down in the theater, Kermit is preparing for his signature number, and we discover that Kermit and Piggy have been holding a candle for each other ever since the demise of their fake marriage, with each of them carrying half of their Muppets-Take-Manhattan-promotional photo. 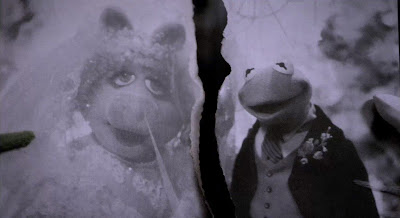 She makes me happy.

With everything going wonderfully for once, Kermit takes the stage to perform "The Rainbow Connection."  And although it was expected and musically inferior to the pure original Henson version, I couldn't help but swell up with joy and sadness as the whole cast gathered to sing the song together.

My biggest issue with this is the fact that they decided this would be the best time to wrap-up the Animal subplot!  Why?!  Why now?!  Why not at least have Floyd's exchange with Animal happen prior to the song so that Animal could be visually struggling with the choice until the climax of the song?! 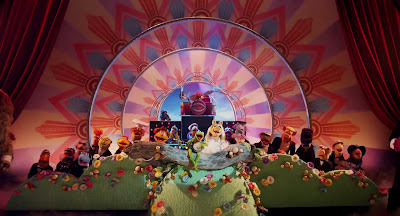 And we've reached the end!  But wait?  There's still more!  Tune in tomorrow to find out if the Muppets succeed or fail!
Posted by John H. at 7:25 PM