I Hope You Dance

Much as Earl Sinclair fills the role of dumb, fat, sitcom husband, Fran Sinclair portrays the smarter, nagging wife, loving stay-at-home mother role.  Voiced by Jessica Walter (of Arrested Development and Archer fame), Fran is essentially the straight-woman of the show, as is often the case with sitcom wives.  The men get to have wacky adventures or get into hilarious scrapes while the women just shake their heads and wag their fingers.  In the wrong hands, this can be a demeaning portrayal.  And on the surface, Fran falls right into this stereotype. 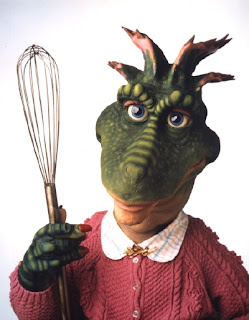 Of course she has a wisk. She's the wife!

However, in the second episode "The Mating Dance," we learn that Fran may actually be the most complex member of the family.  The baby is still a newborn, and thus has no concept of time.  He keeps Fran up all night long demanding attention and food.  When the other children, Robbie and Charlene, refuse to eat the breakfasts that Fran drowsily makes for them, she loses the will to continue serving her family.

Earl, with his misguided chauvinism, attempts to revitalize Fran by giving her a weekend away from the kids, figuring that she just needs a break.  Of course, he screws up and complains about how hard it is the whole time.  And normally, a sitcom episode would use this as the entire premise to teach the husband a lesson about how tough mothers have it.  But Fran returns and is still not "cured," and the episode isn't even halfway done! 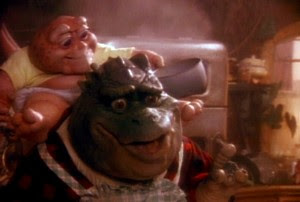 Although 20 min of Baby hitting Earl with a pot would have been fantastic as well.

Earl then realizes that if the problem wasn't the hassle of caring for the kids, then he must be the root of Fran's problematic state.  His pal Roy suggests he try whipping out the old mating dance again, to remind Fran why she fell in love with him in the first place.  And, after taking a refresher course, he prepares to woo her once more with the ritualistic movements.  Unfortunately, these do nothing to help cheer Fran up.

Although it is not fully stated, Fran appears to be suffering from postpartum depression (coupled with exhaustion) as a result of the new baby.  Combined with the concept of a mating dance, the lines between humans and animals are blurred throughout these episodes.  Complex emotional issues are handled with basic biological instincts found in nature.  The dinosaurs fail to grasp the underlying issues of their situations and react inappropriately.

Finally, having given up, Earl lets Fran sleep while he tends to the Baby's nightly annoyances.  In order to get him to sleep, Earl tries a new dance and it works.  Fran observes it and her passion is reignited.  A basic analysis of this episode would result in an incorrect (and disturbing) idea that the dinosaur dances are all sexual in nature and implication.  But when Earl specifies that he is doing a "baby dance," the message becomes clear.  As we go through life, we encounter new obstacles.  And old solutions do not always fix these new problems.  The dances of the dinosaurs are representative of what we need at each stage of life.

Earl and Fran have moved beyond mating rituals.  What is important to Fran now is not that Earl cares solely about her.  It's that he cares about his family.  Fran has broken free from her conventional role and turned it into a greater representation of what it means to be a mother and a wife. 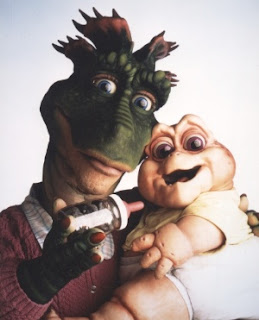