The Muppets, Part 3: Trapped in the Past

With less than a day to prepare, the Muppets return to the Muppet Theater.  The theater is in less-than-pristine condition, although, considering the chaos that went on during The Muppet Show, it's surprisingly clean. 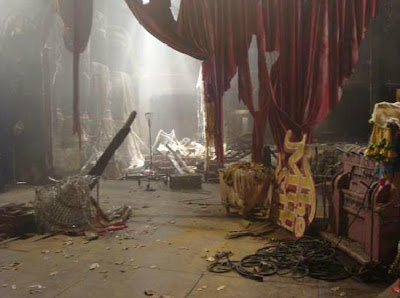 In fact, it's cleaner!

The Muppets and Walter's group decide to clean up the theater to a musical montage.  And, rather than sing an original song, like they would have during the first three films, they sing "We Built This City on Rock and Roll."  I assume this is to remind us of all the covers that the Muppets performed on The Muppet Show, but those songs at least parodied the originals with visual puns or frantic violence.  The montage is great, and we get to see a lot of familiar faces who didn't easily fit elsewhere in the film, but the song is an odd, bland choice. 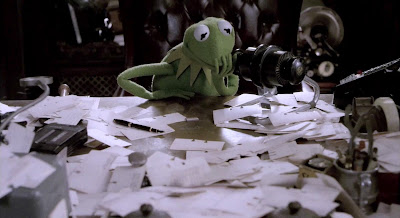 Like Kermit's Rolodex of '80s celebrities, this sequence leaves me wanting more.

After the montage, we move through a few more plot points.  Miss Piggy arrives to help with the show and replace Miss Poogy, but she makes it clear that she is NOT there for Kermit.  This human development creates a nice internal tension for the film.  Ultimately, the main goal is to put on the show and Kermit's broken relationship with Piggy doesn't really play into that, but it's believable and treats our characters as real people behaving normally (something sorely missing from certain previous films).

And speaking of human relationships, Mary leaves Gary behind to continue working as he is oblivious to their crumbling relationship.  Checking back in with the original plot (which is now a subplot) introduces a big motif for the film, in that the humans act less realistic than the Muppets do.  Keep this in mind for some of the later scenes.

Back with the Muppets, the rehearsals are going terribly, and both Kermit and Walter are placed into positions in which they are expected to perform.  Walter is allowed to participate in the show and he racks his brain searching for a talent while Kermit learns that people expect him and Piggy to do a duet.  Unfortunately, Piggy has found a new partner in Pepe the Prawn which is a huge relief for anyone that was worried that the "new Muppets" would dominate a film devoted to the "classic Muppets."  Instead, his appearance is just a cameo. 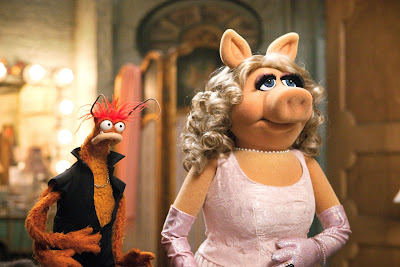 We now abruptly segue into what I like to call "A Flight of the Conchords Segment Disguised as a Muppet Song," when Mary and Piggy sing about the perks of being alone with "Me Party."

For those of you who aren't familiar with this film's songwriter Bret McKenzie, he is part of the comedy music duo Flight of the Conchords and their short-lived television show was comprised of songs exactly like this.  Very explicitly stating the obvious with a multitude of lyrical synonyms and fancifully wordplay, "Me Party" was the only song that really took me out of the film, thinking, "Huh, I guess they couldn't fit that into one of their episodes." 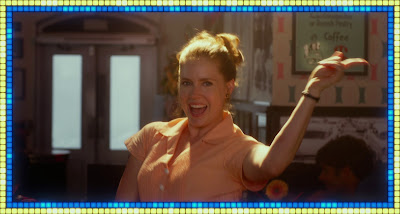 Seriously, imagine Bret or Jemaine singing this.  It makes a lot more sense!

Back to the movie, Kermit stresses over having to find a celebrity to host the show.  With less than 12 hours to go, he decides to beg Tex Richman for the theater back so that the whole situation can be avoided.  Wow, Kermit, you gave up pretty quickly, especially for you... But that means we get to visit our favorite villain again, so it evens out. 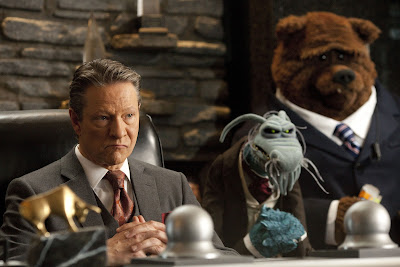 Tex Richman refuses to sympathize with the Muppets and justifies his actions because he is the evil villain.  Oh, and he does this via a hip-hop number that comes so far out of left field that it makes up for the fact that it's fake rap.  This moment may not connect with everyone, but it worked for me because of how far out of place it was (unlike "Me Party," which was only mildly out of place). 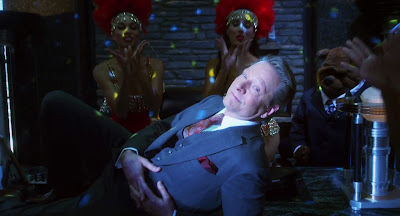 Now, apparently, this number ("Let's Talk About Me") was twice as long and featured an operatic interlude that explained why Tex Richman hated the Muppets and why he always said "Maniacal Laugh" as opposed to actually laughing.  Apparently, during his 10th birthday, the Muppets performed at his party, but he was physically unable to laugh.  So everyone else laughed at him and he grew bitter and resentful.  Normally, I would save the discussion about alternate scenes and storylines for my final recap, but this point is so crucial to his character (and it fills in a major plot hole later in the film) that I consider it part of the movie proper. 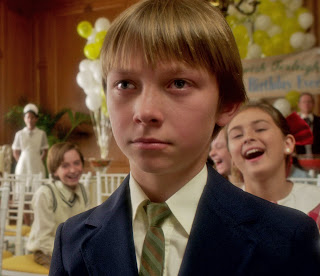 You didn't see this scene, but you should have.

After that jaunt, Richman reveals that not only will the Muppets lose the theater, but also the Muppet name itself.  And who will become the new owners of that name?  Why the horrible Moopets of course. 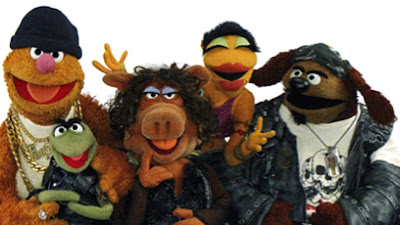 And now they are joined by a fake Fozzie who is probably a reference to this.

Kermit feels that all is hopeless (man, Kermit, where's your spirit?), leaving it up to the rest of the gang to get their celebrity host to save the show.  Meanwhile, Gary nearly gets dumped by Mary for hanging out with the Muppets all day and blowing off their anniversary dinner.  IT's hard keeping track of both of these movies at once, but this is leading somewhere good, I promise.  Until then, here are the Muppets securing their new guest host.


I feel like that was a parody of something...Nope, it couldn't possibly be.