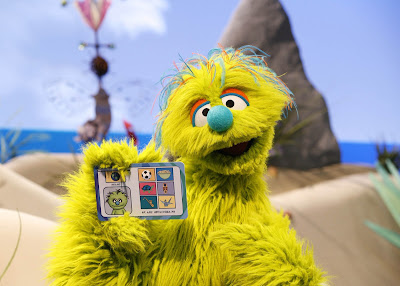 Muppet Universe of Origin:  Sesame Street (by way of Panwapa) 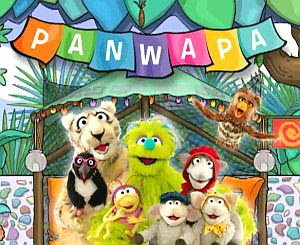 What a diverse bunch!

As a way to create a truly global Sesame Street experience, the Sesame Workshop and the Merrill Lynch Foundation created an interactive online video series known as Panwapa.  Originally Sesame World Wide Kids, Panwapa followed the exploits of a group of recycled Muppets who travel on a floating tropical island to various countries around the globe.  The show promoted cultural diversity and acceptance, proving that we are all humans and have much in common with one another.

Via the website, kids could create their own avatars and personality cards which allowed them to "explore" Panwapa Island and become a part of a larger community.

In the introduction episode, Azibo the Monster finds his way onto Panwapa Island.  The native animals are frightened at first, having never met a monster before.  Azibo is ready to call it quits when no one accepts him, but through the help of the wise owl Athena, he proves to the others that he is worth getting to know.

Society creates monsters.  That isn't to say that evils derive from a group mentality (although this is often the case).  But a society decides and defines what a "monster" is.  The more people who dislike a concept, the more monstrous that concept is.  And sometimes that concept is an individual.

The default reaction we have to the unknown is fear.  If we cannot control it or understand it, we avoid it.  The citizens of Panwapa Island were no different.  Despite being a culturally sensitive vessel, their first impulse is to run away from Azibo the Monster.  The burden is placed on Azibo's shoulders to convince the others that he is not a monster, at least, not in the way others view him.  He has done something to make others upset, and he must fix it.  And while the others learn a lesson about being more accepting, does it make their initial reaction any less valid? 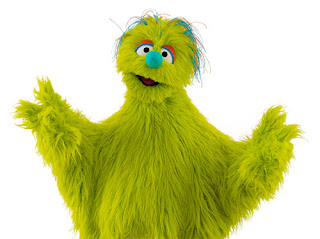 He must be bad or else he wouldn't be a monster.

A scandal has recently rocked the Muppet community and all we can do is wait until we learn more.  Some may be quick to condemn, while others remain optimistic.  And then some are just devastated.  The world as they knew it has changed, and, for the time being, there is a possibility that someone we trust could actually be a monster.

We decide who to love and who to hate.  And when we our previous notions are shattered, we are at a loss for what to do.  Does this make our past a lie?  Have we been wrong this whole time?  Or are we wrong now?  Are we not giving it a fair chance?  There are no easy answers.

Sometimes we don't have all the facts.  We can only trust ourselves.  It is up to us to determine whether or not someone is truly a monster.  And it is up to them to prove us wrong.
Posted by John H. at 9:29 PM