He's the Baby, Gotta Love Him

Everyone loves babies!  They are adorable and precious and needy and loud and smelly and cute and innocent and destructive.  Television babies often fall into one of two categories: they are mindless props that exist to have others dote on them, or they are mini-adults with intelligence and a skewed world view. 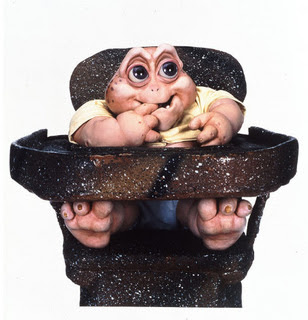 Baby Sinclair exists in the nether region between the two types of fictional baby.  He has intelligence (at least, he can speak and reason), but he still has a solipsistic world view that drives his actions.  He doesn't give a damn about anyone else in the world or in his life.  And he thrives on it.  As a child, Baby was may favorite character because he was funny and adorable.  But now that I am older, I can see the evil tendencies that lurk behind his innocent eyes.  He is almost as bad as Cartman in his narcissism, but what do you expect?  He is just a baby after all.

Baby Sinclair was the most heavily marketed character in the series.  With his Elmo-esque voice and his violent tendencies, he became the face of the show.  Perhaps it is best to let Baby himself explain what he is all about in his hit single, "I'm the Baby (Gotta Love Me)."

That phrase is the exact reason one could consider Baby to be a malicious spirit.  He knows that he can get away with anything because he is the baby and there is no choice but to love him.  His repeated attacks on his father became his signature shtick, and although Earl tried to curry his favor with gives and affection, the baby grew ever resistant to "Not the Mama."

Earl nearly gets his wish to be rid of the little hellion in "Switched at Birth." On Baby's first birthday, it is discover that his nest was switched with that of another baby's during an earthquake at a (pointless-for-egg-laying-dinosaurs) Lamaze class.  Fearing the worst/best, the Sinclairs contact the Molehill family to meet their son and discover that the father has the exact same personality (and skin color) as Baby Sinclair. 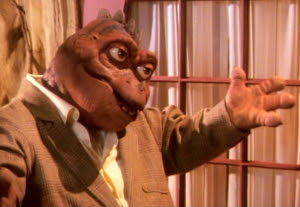 He also has Jason Alexander's voice!

Not only that, but the Molehill's baby is quiet, reserved, non-violent, and green! 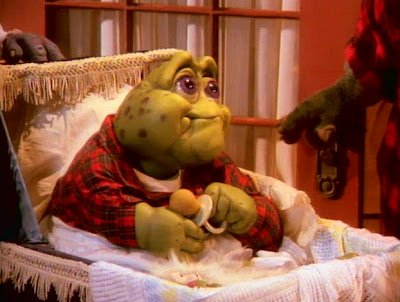 And just happened to be wearing Earl's shirt.

After a quick paternity test at "Absolute Proof Laboratories," the suspicions are confirmed that the baby's had indeed been switched.  Both fathers delight in having their new children, but the mothers having formed a bond with the babies can't bring themselves to stay apart.  Eventually it is decided that wise Solomon the Great shall decide what to do.  In reference to his biblical namesake (or was King Solomon named after him?), Solomon decrees to cut the babies in half. 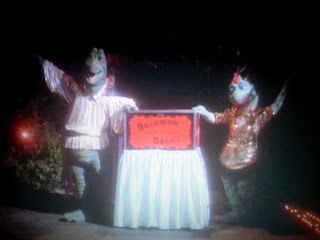 The fathers finally show their true colors, expressing that they've grown attached to the baby that they raised, even if they weren't their true sons.  And to wrap everything up, the tests turned out to be wrong and Baby Sinclair returns to his family to cause his father more pain.

But things get even scarier at Baby's second birthday when he enters "The Terrible Twos."  Baby was already demanding and violent to begin with, so his Terrible Two phase is exponentially worse than any other baby's.  The baby becomes so demonic that an expert exorcist... I mean, babysitter is called in to quell his hell-raising behavior.  He tries reading to him from the Good Book (a Dr. Seuss parody), pacifying him with his crucifix-shaped pacifier, and feeding him his healthy dinner of rice before dessert. 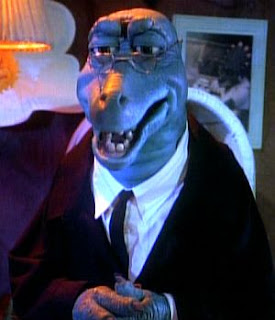 The power of rice compels you!

But even he cannot handle an amplified Baby.  Ultimately, the only solution is to trick Baby into thinking it is his third birthday and that the Terrible Twos have passed.  And the trick works because, after all, he is a baby.

But despite how scary and evil they make Baby Sinclair out to be, there is still a charm in his baby-like outlook on life.  He barely understands the stories that play out around him, but he tries to remain involved, inserting himself into the action (demanding rewards all the way).  In today's age of shows built around unpleasant, selfish, deplorable people, one need only remember that this is not a new idea. We were all babies once. 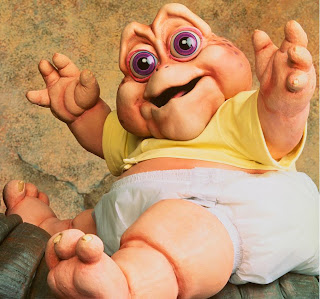