A comedy staple that's as old as time is the endless conflict between a husband and his wife...'s mother. Just like all relationships, a mother-in-law and her son-in-law can be genial, caring, ambivalent, or antagonistic.  But in sitcoms, they are always barbaric.  Dinosaurs takes this cliche to its logical extreme by placing this antagonism in the hands of bloodthirsty beasts.

Although she was originally supposed to be introduced in another episode, the mother-in-law from hell, Ethyl Sinclair was welcomed into the world via the grandest of dinosaur traditions, "Hurling Day." 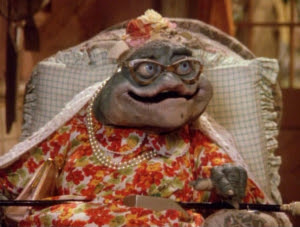 The nicest old dinosaur you'll ever meet, unless you are Earl.

According to ancient dinosaur lore, elderly dinosaurs are forced to be thrown into the tar pits on their 72nd birthday so that they no longer become a burden to the pack, slowing them down when predators are around.  The original dinosaur to suggest this custom, Bob LaBrea, recognized his waning lack of skills and felt his sacrifice would help the tribe prosper.  Younger relatives are instructed to toss their elder's over the cliff, to make it a memorable family moment.

And as a bonus, men are allowed to toss their mothers-in-law. 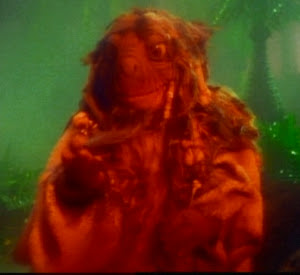 What a wise and noble suggestion.

Cut to a million years later where the Hurling Day tradition as evolved into a day that all men long to celebrate.  Although the custom is still practices with all senior dinosaurs, the mother-in-law toss is more special among the male-driven culture.  It is so special, in fact, that Earl's cruel boss Richfield treats him with decency and respect on "his" special day, giving him the day off, and drinking scotch as they reminisce over Richfield's own Hurling Day by watching the tape of that occassion. 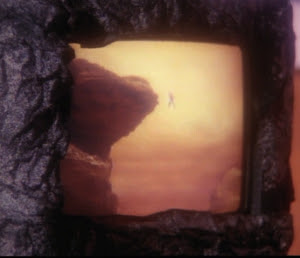 VHS?  This must be prehistory!

Everyone is getting into the hurling spirit as Ethyl resigns to her fate (but not before getting in a few more insulting jabs at Earl's expense).  Only Robbie seems to feel that there is something immoral about the tradition.  He feels that, now that dinosaurs are domesticated, the need for Hurling Day has been eliminated.  Even though Ethyl informs him it is her time to go, he won't take "goodbye" for an answer. 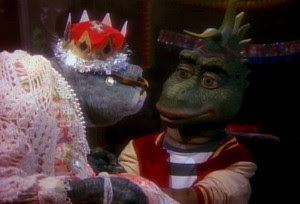 I gotta bust you outta this joint, Granny.

Ultimately, the family is swayed by Robbie's defense of his grandmother and decide to let Ethyl choose whether or not to die.  Earl whines that the longer she stays alive, the more miserable he's getting, and that seals the deal.  Ethyl will remain at the Sinclair house for the rest of her life, just to make Earl squirm.

She remained a central part of the family, causing Earl much strife.  Briefly, in "The Last Temptation of Ethyl," she does pass away long enough for Earl to gleefully bury her, but she returns from the afterlife to continue tormenting him.  Their attacks on each other get more and more brutal, and things finally come to a head in "Driving Miss Ethyl," which finds the two of them trapped in a 6-hour car ride to Ethyl's high school reunion. 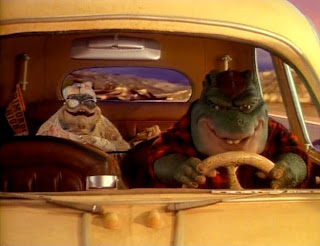 Without Morgan Freeman, this is just going to be painful.

The two spend the whole car ride bickering and annoying each other, although they do eventually pull through for each other when a cop pulls Earl over for speeding.  Meanwhile, at home, Fran tries to get the family to take a nice portrait for Earl's birthday, and they end up in family therapy because dinosaurs can't have nice things. 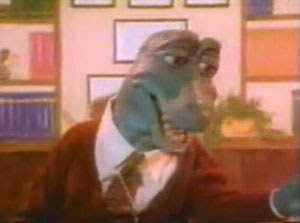 Although the Michael-McKean-osaur is a helpful therapist.

At the reunion, Ethyl is shocked to learn that she is the only member left of her class still alive (since the rest probably were hurled on Hurling Day).  This moment of emotional humanity finally allows Earl to sympathize with his mother-in-law, and when they return home to find the family still trying to take the portrait, Earl claims that the picture won't be complete unless it has all of his family members in it.

Despite everything the two have been through (including premature burials and death threats), Earl is able to put his pettiness aside and accept Ethyl into his family.  Ethyl returns the favor by breaking his rib with her cane.

Because mothers-in-law are the devil.
Posted by John H. at 2:52 PM