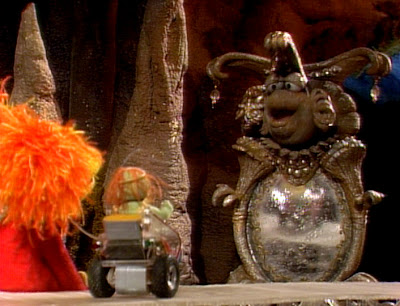 Despite the episode's title, this story does not involve the Fraggles traveling to a parallel universe where opposite Fraggles exist (as they did in "Fraggle Wars").  Instead, Red discovers a magic talking mirror who promises to fulfill her desires of having a memorable birthday party.  See, Red has been bothering everyone by throwing herself numerous birthday parties every week.  When the 29th consecutive party sounds less than thrilling to her friends, Red storms off deep into the caves.

She finds Mavis who can see into the future and promises her a memorable birthday party.  She leads Red to the kitchen of Ma Gorg, who is celebrating her own birthday alone since her family members left her (for legitimate reasons).  Mavis attempts to get the two to have a joint party, but the Gorg and the Fraggle will have none of it.  However, the charming mirror promises to fulfill their wishes and Ma Gorg comes around to the idea. 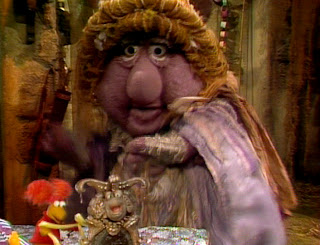 But when Red decides to "save" Mavis from the Gorg, she drops and shatters her in the process.  Fortunately, Cotterpin Doozer has been mixing glue all day (since she too decided to abandon Red's party) and is able to help restore Mavis.  Briefly, a Fraggle, Gorg, and Doozer come together to celebrate in peace.

For a "magic mirror," Mavis only has two special abilities.  One is that she can talk, and the other is that she can see into the future.  Note that her reflective glass doesn't possess any supernatural qualities.  It doesn't act as a window to other places or times as other magic mirrors usually do.  And even though she can see into the future, she doesn't tell other people what's going to happen.  She only gives vague hints and warnings, saying things like, "That glue will come in handy later."

Yet, even though future-sight is a tremendous power, she manages to win everybody over with her first ability: talking.  She promises to grant many wishes, but she has already fulfilled the greatest wishes of both Red and Ma Gorg.  All they wanted was someone to give them attention, and Mavis does just that.

A mirror does nothing but reflect what is already there.  Red and Ma Gorg each needed a friend but due to their narrow viewpoints, they only saw each other as enemies.  Mavis was able to show them that they could have been there for each other all along.  And she had to allow herself to be sacrificed in the process.

Since she can see into the future, Mavis accepts fate with optimism and gusto.  From the beginning of the episode, she knows that Red is going to shatter her into a million pieces, leaving her temporarily dead.  But it is a sacrifice she has to endure in order to fulfill the wishes of those she cares about.

A true friend is like a magic mirror.  They know you well enough to see you for who you truly are and thus can make accurate predictions about your future.  You turn to them for advice because they know what's best for you.  They see all.  They know all.  You just have to trust them.

And Mavis is not alone.  There are others just like her all over the world.  And some time, when you least suspect it, your magic mirror can turn up anywhere. 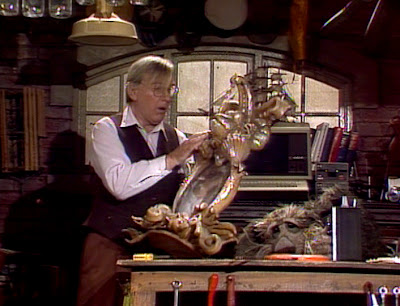