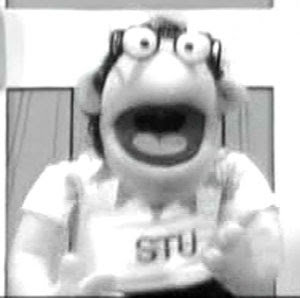 Yet another recurring element in Muppets Tonight was the "reveal" that the night's current guest had previously appeared with the Muppets in older works of entertainment.  Basically, it was an excuse to parody the shows of yesteryear and put the Muppets in funny costumes.  None of it could actually pass itself off as Muppet canon, of course (which makes it all a lost opportunity to revisit classic Muppet sketches and motifs).  The humor depended on the familiarity with the reference material.

One of the stronger "Classic Muppet" sketches was "The Kermit the Frog Club," which spoofed The Mickey Mouse Club, one of Disney's earliest attempts to make stars out of teenagers who danced, sang, and had good wholesome fun in their creepy, unrelenting devotion to the Mouse.  While the Club is currently known for its most recent iteration that spawned our Timberlakes and our Aguileras and our Spears...s, it is the 1955 version that serves as the backdrop for today's sketch.

Guest Cindy Crawford (or as she was originally known, "Cinderella Crawfordopolis") was one of the original Frogketeers on "The Kermit the Frog Club," along with a few other will-be stars. 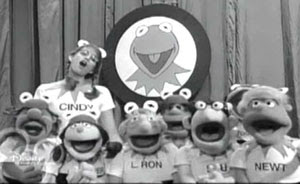 Various elements are parodied, with the "Kermit Frog Theme Song" ("Where's the 'the'?" cries Kermit during the song) and frighteningly ambitious career plans for the young cast.  But it is during the roll call that our little Stu gets to shine.  Stu leads the pack.  And then comes back.  Again.  And again.  And again. 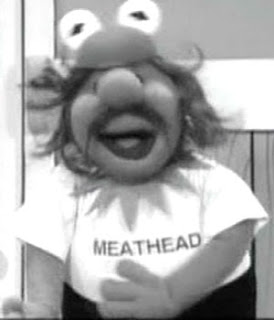 Stu suffered from extreme short-term memory loss.  Unlike the rest of his Frogketeers, Stu would not go on to bigger and better things.  His affliction prevented him from normal interactions, making the transition into society very difficult for him.

But despite his setback, Stu's confidence and happiness did not falter.  He excitedly interjected his name into any conversation he could.  It was all he knew.  It was all he could do.  And he had fun.

Stu never went away, though.  While the rest of his friends became successful celebrities, Stu remained with the Muppets it seems.  At the very end of the episode, he returns to once again shout his name.  Strangely, he has remained in his youthful state.  It seems that living in this forgetful stasis has kept Stu forever young.  Unfortuantely, he doesn't get to enjoy his newfound fame since Cindy Crawford vaporizes him with her laser-vision.

It makes sense in context, I assure you.

The moral of Stu's life?  Um, be yourself.  And stay away from supermodels. 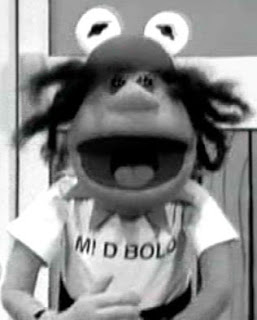 M! D'Bolo had a much more interesting life.  But that is a tale for another day.
Posted by John H. at 7:49 PM