Over a year ago, I started this blog in order to build excitement and anticipation for the new Muppet movie that would be coming to theaters soon.  It was a way to reconnect with the past before seeing what the future of the Muppets held.  When the The Muppets finally premiered, I refrained from sharing my review and analysis because I wanted to let the initial excitement and first impressions subside.  Now here it is, exactly one year later, and I can finally revisit it.  It is time to see whether or not The Muppets is worthy of the Henson name. In the months preceding this project, it was evident that this would be a personal trip down memory lane for writer Jason Segel.  He grew up as one of the biggest Jim Henson fans, and we are going to be sharing his own relationship with the Muppets.  So, rather than start with Kermit or any of his Muppet pals, we meet two completely new characters named Walter and Gary.  Via flashbacks, we see the two brothers grow up in Smalltown, USA. 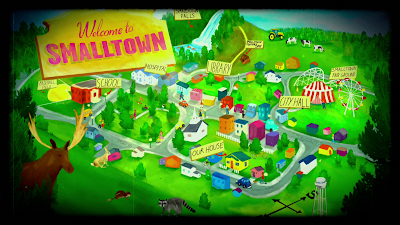 A picturesque little town that you probably grew up in.

Walter begins to notice that he is different than the other boys (mainly because he is a puppet) so when he discovers The Muppet Show, he becomes instantly attached to this group of outsiders.  He and Gary spend their free time watching the Muppets' old shows and become an inseparable duo. 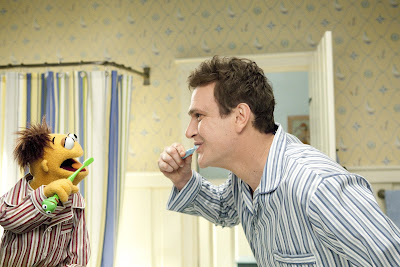 On the day Gary is to leave for a trip to LA with for his anniversary with girlfriend Mary, he invites Walter along so that he can visit the world famous Muppet Studios, fulfilling his lifelong dream.  Gary assures Walter that Mary won't mind the company, and the two head out for the day, singing our opening number, "Life's a Happy Song."  Penned by Flight of the Conchords' Bret McKenzie, this self-referential "happy song" parody sets the tone for the film.

Despite not having seen the Muppets in person yet, the film definitely feels like a Muppet movie with this opening number, harkening back to The Great Muppet Caper's, "Hey, A Movie!" opening.  Gary takes a break from the song to pick up Mary, who has finished repairing a station wagon similar to the one from The Muppet Movie for her elementary school class.  This absurd bit of visual humor keeps the tone similar to the classic films. 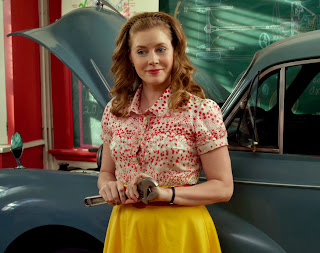 Mary shows some internal concern when Gary reminds her that Walter is joining their anniversary trip, and she has a musical soliloquy in which w learn that she hopes Gary will propose to her on this trip.  Now that we've got these three characters set up, we can get this show on the road and head to LA. 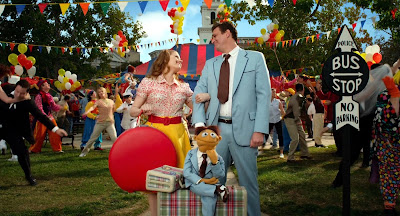 10 minutes in and still no regular Muppets in sight!

To appease Walter, the gang first visits the dilapidated Muppet Studios.  See, in the world of The Muppets, the Muppets have been out of action since 1981, when The Muppet Show ended...except they make references to post-Muppet-Show works such as The Muppets Take Manhattan, Muppets Tonight and Muppets from Space, so it's pretty unclear when the Muppets supposedly disappeared.  Somewhere in that 1980s to 1990s area, the Muppets stopped working, and as a result, the Studios have become a depressing wasteland. 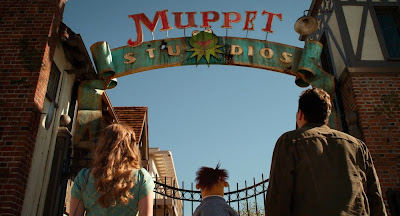 All the attractions have been closed down, due to the lack of demand.  A melancholy Alan Arkin leads misplaced Japanese tourists on a lackluster tour of such thrills as the room where the wires and ropes are kept. 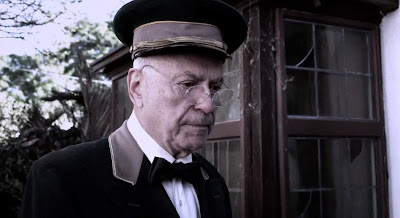 How the mighty have fallen.

Walter sneaks inside of Kermit's old office where he sees a bevy of classic objects and photos with old guest stars posing with the Muppet cast.  But Walter has little time to react when a posse of villains enters the room.  Waldorf and Statler lead oil-tycoon Tex Richman (with his henchmen Uncle Deadly and Bobo the Bear) to Kermit's Rich and Famous Contract from The Muppet Movie.  Appearently, the expiration date is almost up and unless the gang raises $10 million, the theater will be sold.  Richman claims he'll turn the studios into a Muppet museum, but he'll really begin drilling for oil as soon as he can.  Tex Richman, like Doc Hopper and Nicky Holiday, is a great Muppet antagonist, as his goal is realistic and yet absurd at the same time. 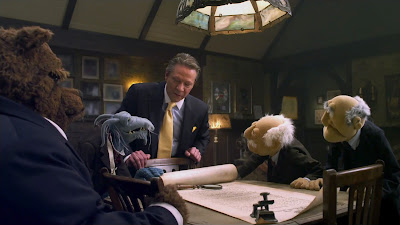 Strange how these four are the most evil Muppets they could come up with.

After an amusing few minutes of this: 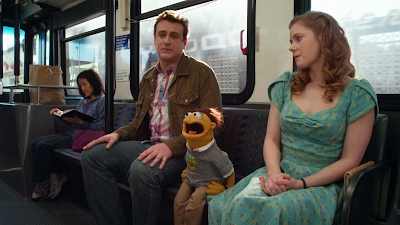 Walter alerts Gary and Mary to Tex's plan.  They wind up at Kermit's house in Beverly Hills and tell him of the horrible news.  Kermit (and his servant the '80s Robot) ponders the possibility of reuniting the gang to put on one more show to raise the $10 million.  As he walks through a hallway of portraits of his old friends, he imagines them coming to life and supporting his vision, though he knows they are just "Pictures in My Head."

So far, the movie is two for two on gorgeous musical numbers.  Although the movie asks a lot of us to pretend the Muppets never performed since the 1980s, this number gets right to the emotional core of the issue and we truly believe that our protagonists haven't seen each other in a long time. 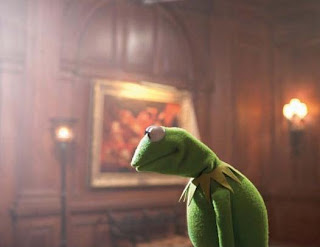 We've got to go back, Kermit.

Tomorrow, we see what our other friends have been up to during their time off.  And maybe, just maybe, things will return to their former glory.
Posted by John H. at 7:53 PM