The Muppets, Part 2: It's Time to Re-Meet the Muppets 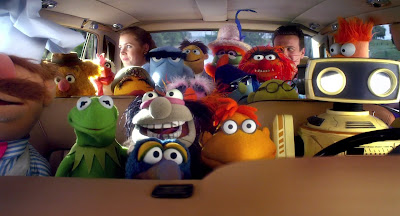 Yes, they occasionally pop in with a few words of encouragement, but the next 20 minutes are all about the Muppets.  Kermit first tracks down Fozzie in Reno where he is performing at a casino with a Muppet tribute band known as "The Moopets."  They catch Fozzie singing a parodic version of "The Rainbow Connection" that alerts customers to the discounts of the casino.  This song is just so sad and wrong (like, why isn't the Kermit stand-in singing the song?), that it's perfect. 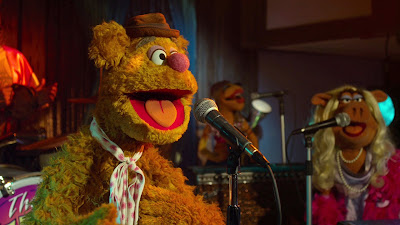 A little aside, here.  Here comes the first issue I have with the movie.  I hate the Moopets.  Yes, they are supposed to be hated within the context of the film, but I hate the idea of the Moopets.  If they are a Muppet tribute band, why do they hate the Muppets so much?  They are just nasty and rude for no reason, especially towards Fozzie.  That would be like a Beatles tribute band constantly belittling their lead singer, Paul McCartney.  Ringo, I'd understand.  But basically they are mean just to make it easier for Fozzie to leave them.  They don't sit well with me. 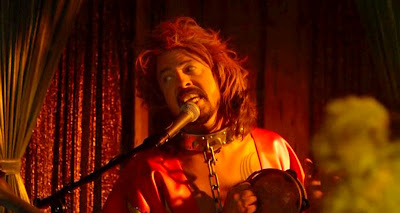 Dave Grohl as Animal is great, though.

Next stop is Gonzo's Royal Flush.  Remember how he was a plumber in the first movie?  Well now he is the richest plumber in the world.  And he acts like a corporate tool now which...his hard to buy.  Having traced Gonzo's history for the last year, I've become pretty familiar with the kind of whatever Gonzo is.  And Gonzo would never sell-out, even for a second.  Fortunately, Gonzo reveals his daredevil costume at the last second and plummets off his building to join the Muppets. 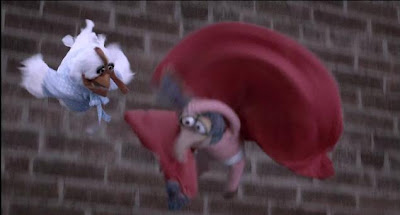 There's the Gonzo we love.

He also blows up his plumbing business, to prove his priorities.  Good.

Finally, the gang picks up Animal at a mental institution where he is undergoing anger management therapy with Kristen Schaal and Jack Black.  This scene makes sense in it's premise, but it creates a weird mood for Animal to be in during the whole movie.  I'll show you the clip to explain what I mean.

As soon as the Muppets mention drumming, he clearly gets excited and wild, then has to revert back to being "in control."  This will become a recurring bit throughout the movie, even though it's clear Animal can go back to "normal" at any time.  It would have been stronger to have Animal remain completely calm and unnatural until a crucial point later in the film.  Otherwise, we just get awkward Animal fluctuations.

The rest of the Muppets are picked up via montage and we see our other issue.  Some, like the Electric Mayhem, are down on their luck, but others, like Scooter or (as we saw earlier) Gonzo are doing very well for themselves.  Some of them could even be considered famous for the new roles they have found themselves in.  I thought the whole point of the movie is that the Muppets have disappeared from the public consciousness.  Clearly, that isn't the case for about half of the gang. 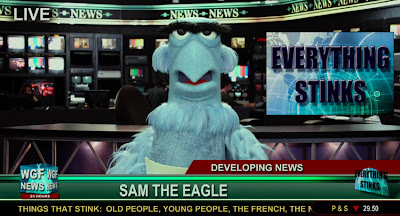 Even though this just furthers my point, Sam the Eagle on Totally-Not-Fox News is perfect.

Compare this to The Muppets Take Manhattan, when the group had to go their separate ways and leave Kermit in New York.  The Muppets all found menial jobs and were struggling to stay afloat.  Fozzie even went in to hibernation.  That's how they should have disappeared here, not just become rich superstars in other fields of work.

However, the one person who would be acceptable to have achieved their dream job is Miss Piggy, and lo-and-behold, she is working as an editor for Vogue Paris.  This takes us back to The Great Muppet Caper where Miss Piggy tried to get into modeling.  It seems to be a natural evolution of the character, unlike rich Gonzo.  Piggy is now highly exclusive and the Muppets have to sneak in to her office by doing...Muppetman.

Okay, this is cheesy and weird, but I'll admit that as a kid, I may have taken my Muppet plush toys and done the exact same thing while playing...

Unfortunately, Piggy refuses to rejoin the Muppets.  After her falling out with Kermit following her trick wedding at the end of The Muppets Take Manhattan (wait, so all of these movies are canon with each other now?), she had her heart broken.  She is doing well for herself in Paris and will not come back.  Finally, a plot point that make sense!

Stupidly, the gang decides to try their luck by using "Miss Poogy" from the Moopets as Piggy's replacement, and they go from television network to television network to pitch their comeback show.  I wonder how Walter, Gary, and Mary are doing... Oh well!  The Muppets finally arrive at a network called CDE after being turned down by everyone else.  They plead with network exec Rashida Jones to give them a chance, and she only reluctantly allows them a two-hour timeslot when the hit game show "Punch Teacher" is pulled at the last minute. 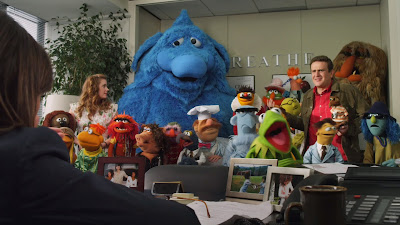 The Muppets are coming to television!

Tomorrow, we return to the Muppet Theater and Walter starts to find his place in the world.
Posted by John H. at 11:38 AM