The average family has 2.3 children.  In TV land, this usually translates to a family with one son, one daughter, and one baby of inconsequential gender.  Having a boy and a girl allows for different dynamics to play out in the household, especially in relation to the parents.  A father-son relationship can be quite different from a father-daughter relationship.  And Earl Sinclair's opposite mindsets toward his children result in an opportunity to see these relationships unfold in the prehistoric era.  So let us analyze two episodes, each concerning a significant "coming-of-age" moment for the Sinclair children. 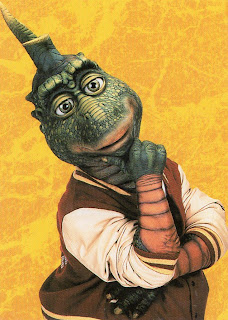 Surprisingly, it is Robbie's story that contains metaphors for the menstrual cycle.

First up is Robbie, who turns fifteen years old in "The Howling."  Once a month, the adult males gather to howl at the full moon and air their grievances.  Robbie (who is already having trouble howling) doesn't see the point of the ritual, and he especially doesn't believe the ancient texts that predict the end of the world should the howling not occur.  However, it is clear that during the days preceding the event, the men start to get irritable and moody.  This change in attitude is referred to as "PHS."  Seriously.

Ever the rebel, Robbie refuses to howl, and Earl and his best friend Roy get into a huge fight over the situation (especially the fact that Roy only got Robbie a cheap pencil case as a howling gift).  The moon is blotted from the sky, and everyone assumes that the end of days is upon them.  Of course, no such cataclysm occurs, but the tensions among the males are even worse.

Robbie eventually realizes that the howling serves a necessary purpose in his society.  The beliefs behind it may be outdated, but the custom and the tradition keeps the community tight.  Like a prehistoric bar-mitzvah, Robbie becomes a man that day, and makes his father proud for following in the tradition.  Plus, there is a sweet moment in which we learn that Roy's sub-par howling gift was actually the same gift he received at his howling from his father. 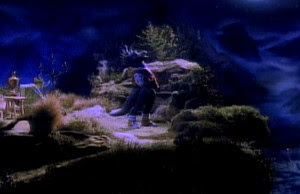 And Robbie eventually let out his mighty howl.

The bond between fathers and sons are at the forefront of "Howling Day" and both parties emerge as stronger men for having survived the turmoil.  But there is a different set of circumstances in play when it comes to Charlene's entry into womanhood. 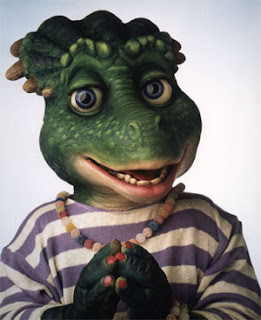 Not a girl, not yet a theropod.

In "Charlene's Tale," 12-year-old Charlene laments the fact that she is the only girl in her grade whose tail still hasn't grown in.  Stuck with a little nub of a tail, Charlene gets overlooked by the boys at school, who would rather go for a girl with a nice long tail.  She becomes so ashamed of her body that she resorts to purchasing a prosthetic tail enhancement. 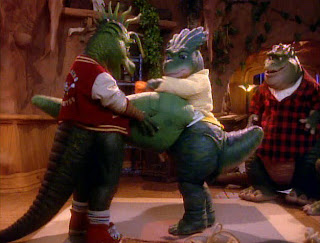 This is all a metaphor for...something.

Earl doesn't quite see what the problem is, because he's happy with Charlene just the way she is.  In fact, when others start talking about Charlene's tail getting bigger, he involuntarily punches them to shut them up.  And so, when the inevitable comes and Charlene's tail finally grows in, Earl is devastated.

Charlene's new attribute attracts the most handsome boy in her class, and it's time for Charlene to go on her first date.  Earl resists all form of change, and tries to treat her date as a younger child, offering to play board games with them all night rather than see his little girl go off on her own.  Fran gives the new couple an opportunity to escape and Earl wallows in sorrow all night, unable to accept the fact that his daughter is growing up.

When Charlene returns home in tears, Earl is thrust into the awkward situation he had been trying to avoid.  He must confront the fact that Charlene is a young woman.  After learning that her date dumped her for a girl with a longer tale, Earl finally dispenses some fatherly wisdom, telling Charlene that she is not defined by her tail, and that boys who truly care for her will not be so petty as to only like her physical qualities.  She is in a new stage of her life, and Earl can no longer be there to protect her all the time.  But he will still support her and the choices she makes.

Comparing Robbie and Charlene's stories, we see that Earl's point of view is representative of many fathers.  The boy should grow up quickly and become a man, but the girl should remain young forever and stay a girl.  It is a narrow-minded view that Earl has to adjust from.  Eventually he sees that he cannot control the flow of time, and he cannot just view his children as "boy" and "girl," or "man" and "woman."  They will always be "son" and "daughter" to him, and he must respect their individuality.
Posted by John H. at 12:34 PM