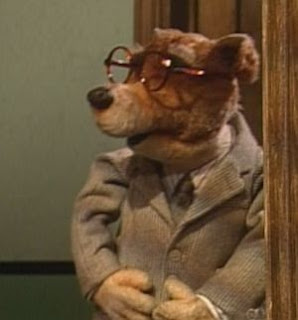 Muppet Universe of Origin:  Dog City
Most Significant Appearance:  Dog City, January 23, 1993, "Cats 'n Dogs"
Dog City resident Eliot Shag is inspired to write his next story after his neighbor, the dim-witted bulldog Bruno, complains about a rumor that ctas may be moving into the building.  Despite their landlady being a feline herself, Bruno is uncomfortable with the idea of cats actually living in a dog city like Dog City.

Eliot crafts a tale about rival dog and cat gangs and a conspiracy to bomb Dog City with an actual flea bomb (i.e. one that contains flesh-eating fleas).  After the tale is over, however, we learn that the new neighbor is actually a dog named Katz.

Why Is He the Most Important Muppet?
Henson introduced us to the world of Dog City in his hour-long special Dog City.  Based on the famous painting of dogs playing poker, Dog City was a film noir spoof that crammed as many dog puns as humanily possibly into 60 minutes.  But there was nary a cat in sight.
It wasn't until the spinoff series of the same name that the notion of cats inhabiting the same world even entered into the equation.  Based on Bruno's behavior, it's evident that cats and dogs live in a segregated society that mostly keeps to their own individual turfs.  In Eliot's fictional world, the main feline character is a female villain named "Kitty," which, if you consider the implications of this scenario, could come across as highly offensive.  Imagine if some other show had a character that was the sole representative of their minority and their name was a slang term for a member of their group. 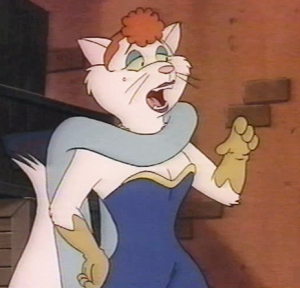 Although there are worse names than "Kitty."

Despite the attempts to keep both groups isolated from one another, Ms. Fluffé, the landlady, is welcome in Dog City. However, she treats her tenants with as much hostility as they treat her, if not more. Dog City may be a fantastical world, but is far from a canine paradise. 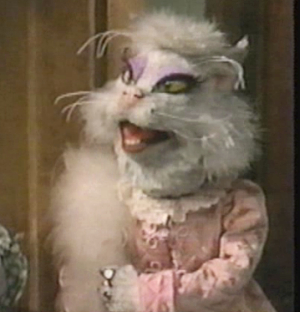 Is there a Cat City?
Although Eliot's story places cats in a villainous role, his conversations showcase him as a tolerant individual, suggesting that this is the Dog City of the modern age, and perhaps people...animals are starting to move away from this speciest warfare. Enter Bob Katz. In a world that is supposed to be perfect and respectufl towards one another, Bruno reveals the hidden racism and still lingers in the hearts of many Dog City citizens. The world around them may be changing, but they are stuck with their intolerant mindsets.

Much like The Twilight Zone's "The Monsters are Due on Maple Street," a simple neighborhood is thrown into panic at the sheer mention of an alien citizen entering their mists. Bob Katz only has to mention his name in order to expose the blatant disregard for equality and tolerance that should be present in a well-informed, modern era.

Bob Katz may not have done anything of significance. But "Bob Katz" has.
Posted by John H. at 4:00 PM