Low-brow humor gets a bad reputation.  Appealing to the lowest-common denominator classifies one as being unintelligent, lazy, or immoral.  Yet, this is humor distilled to it's most basic form.  Mere slapstick and lewd sounds spark guttural, involuntary laughter because they are unexpected to us.  "The Three Stooges" shorts are classics, not because they provided great insight into the human process, but because they speak the universal language of physical comedy.

Two characters that people may point to as a sign that Muppets Tonight paled in comparison to The Muppet Show are Andy and Randy Pig. 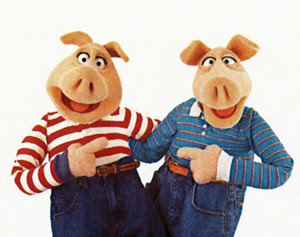 The Muppet Show had unhinged characters and dim-witted characters and one-dimenisonal characters, but they did have pure idiots like Andy and Randy, especially not as their main characters.  These pigs were so cartoonishly stupid that they had no semblance of realism.  They took every word literally, enjoyed bashing their heads together, forgot who they were or how their body functioned, and refused to complete the most minor of tasks with their catchphrase, "This job's too hard!"

The pigs originally appeared as a duo known as "Kirby and Jeff" in one of Nickelodeon's "Muppet Time segments, where they are two young boys who attempt to prove that they can get dressed all by themselves.


Here, their imbecilic actions are understandable.  Little kids still have a lot of growing to do, but they often like to show off what they have learned, even  if they still lack the abilities to do so.  This song is cute and accurate for their age.  But this set the tone for all future appearances.

After Muppet Classic Theater redubbed them "Andy and Randy," their relation to Miss Piggy was established.  In the first episode of Muppets Tonight, Miss Piggy agrees to appear as the guest star if Clifford hires her two nephews.  While Piggy would appear less frequently from then on, Andy and Randy were there to stay.

Now played by Steve Whitmire and Dave Golez, Andy and Randy would cause all sorts of trouble for the crew.  Their biggest episode was "Episode 104: John Goodman" in which John Goodman saves their lives from being electrocuted, so they decide to repay him by becoming his personal slaves.  And of course they only do more harm than help. 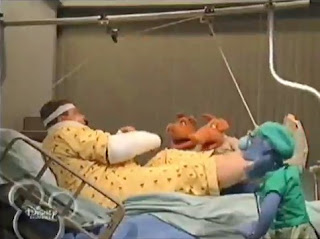 It gets worse from here.

This is probably the twin pigs' worst episode because they are so prominent.  With pure, unbridled idiocy, small doses are the best.  This is why the Ralph-Wiggums of Television Land are usually regulated to bit parts of larger ensembles.  Fortunately, the writer's realized this, and soon, Andy and Randy would only appear once per episode.  And these moments would be fantastic.

My favorite recurring segment was "The Eagle's Nest," Sam the Eagle's political panel in which he would attempt to discuss important affairs with whomever he was able to scrounge up.  Andy and Randy Pig were the only ones dumb enough to participate, and thus appeared in each episode.  Having Sam grow increasingly more agitated while he attempted to maintain control was a delight, especially when Andy and Randy would twist his questions into some clever wordplay.  The following clip may be the best of the bunch, as only the pigs have shown up this time.

The repetition of "Messrs" at the beginning is innocently adorable (and would carry over into a future episode) but I was particularly fond of the pigs shouting "Yoyoyoyoyoyoyo!" as they tied Sam to his chair, because this was calling back to an earlier episode in which Clifford greeted them with the phrase.  It shows that they are learning.

However, there was one second season sketch that truly put Andy and Randy into their element.  In "Episode 203: Heather Locklear," the pigs somehow got the opportunity to write their own sketch.  This resulted in the perfectly-titled "The Hardy Pig Boys in 'The Mystery of the Zombie Queen of the Amazon Outer Space Jungle Bee-Woman Case' (based on a novel by Jane Austen)." 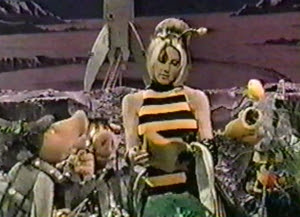 Now this should have been the whole episode!

Andy and Randy, in true Andy and Randy fashion, fail to make it past the first line of their script without getting horribly confused about what they had written.  They don't understand their own jokes, they fail to solve the mysteries of who their characters are, and five pages consist of doodles.  But it ends with Kermit as Godzilla tearing through the scenery.  Ed Wood would be proud.

It's clear that when performing the pigs, Golez and Whitmire just set out to have as much fun as possible.  Adopting these doofy voices and failing the puppets about whenever they got the chance, the two puppeteers obviously did not care how silly they were being.  Andy and Randy could push the limits of low-brow humor and that's what makes them so ceaselessly entertaining.  They could mine a joke out of any situation and, unlike most of the elements of Muppets Tonight, it was evident that they weren't trying to hard.

Andy and Randy were comedy popcorn: not intellectually filling, but enjoyable and reliable nonetheless. 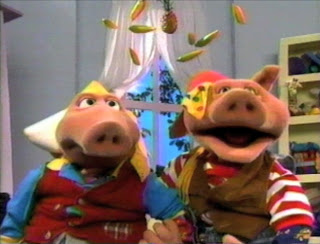