Muppets from Space, Part 5: Whatever

The spaceship lands, the doors open, and a mysterious figure emerges to speak to Gonzo.  Once he is sure that it is in fact the correct Gonzo, he heads back into to the ship so that the aliens can perform "Celebration" by Kool and the Gang.

That's right.  There's no deep meaningful introduction or even an original song to commemorate the reunion of Gonzo and his species.  Just a cover of "Celebration."  Sure, it's a fun little romp, but for all of the mystery and suspense that had been building, the performance seems a little out of place.  All of a sudden, here are a bunch of Gonzos singing and dancing and the crowd just goes along with it, without questioning anything.  Maybe it's supposed to be campy, but it's a little jarring. 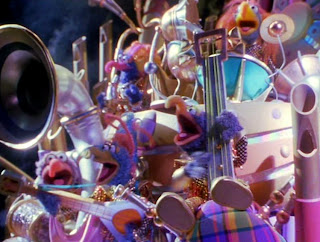 It's interesting to see how many variations of Gonzo they can create.

After the song, the Ubergonzo leader presents Gonzo with a helmet and prepares him for his initiation: being fired out of a giant cannon.  See?  All of Gonzo's crazy stunts weren't so crazy after all.  This was just a traditional custom on his home planet!  Okay, I get that, and it is keeping in line with the song "I'm Going to Go Back There Someday," where it is revealed that Gonzo likes to recreate the experience of flying in order to feel at home in the sky. 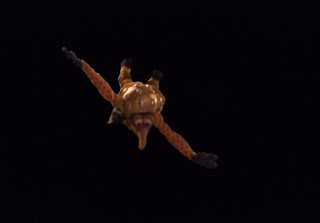 Although Gonzo would probably prefer to do it without the helmet.

But then, to ruin a happy moment, Mr. Buzzkill Singer shows up with his giant laser gun and threatens the aliens to stay so he can do evil stuff.  However, his gun fails to work and everybody laughs at him, causing him to have a meltdown.  Then, because this movie makes no sense, the Ubergonzo offers to bring Singer back to their planet with them because they find him funny.  Um, the guy just tried to kill you and is clearly mentally unstable.  Why are we rewarding him? 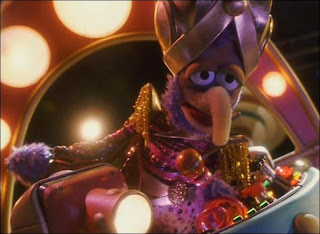 Maybe he shouldn't be the leader anymore, guys.

As the aliens prepare to depart, Gonzo says his goodbyes and everyone gets all weepy.  Gonzo boards the ship and then decides, no, he's going to stay on Earth.  That's his true home and the Muppets are his true family!  That...is a sweet message but it really came out of left field.  The Muppets didn't really do much in the way of bonding with Gonzo over the course of this film.  They were rude to him when he expressed his beliefs, they "rescued" him from the bad guy and still made fun of his beliefs, and it wasn't until the very end that Kermit was like "You should believe what you want to believe and I'll support you."  This may be your family, Gonzo, but they don't really treat you very well.  You should at least consider traveling with the other Gonzos a bit.

In fact, we don't know anything about the other Gonzos!  Where do they come from?  How did Gonzo end up on Earth?  How did they master interplanetary travel?  Why is Gonzo so important to them that they would travel across galaxies to bring him back with them?  These are questions that could have been answered had Gonzo stayed with them, but I guess we can't have him leave the cast permanently. 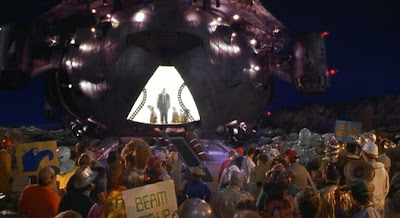 Well, at least they got Jeffrey Tambor.

So the ship blasts off, and we end with many unanswered questions, but the most pressing one on Gonzo's mind, as he sits on the roof with his friends, is "Why did they make me build a jacuzzi?" 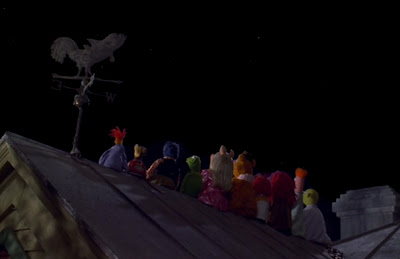 Muppets from Space is quite disappointing! 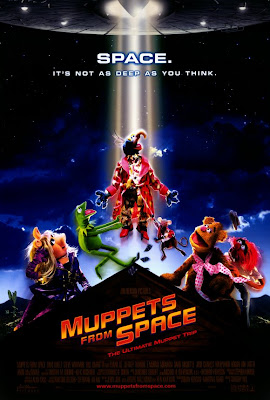 It's not very deep indeed.

This movie is really all over the place.  It has some decent scenes and humor throughout, but the story is cliched, the cameos are obnoxious, and the message is confusing.  But there is one thing that this movie did wrong above all else.  It may be a little controversial, depending on how attached you are to the Muppet canon, but I believe this is the biggest flaw with the film:

Gonzo should have remained an unclassified species.

Did you know that this film original had an alternate ending?  It did, and once I tell you that ending, the movie will make a whole lot of sense.

The aliens that came to Earth were not supposed to be Gonzos.  They were supposed to be another species entirely.  They just happened to be huge fans of Gonzo's stunts from The Muppet Show and wanted the chance to meet him.  Gonzo would spend the whole movie thinking his family would come for him and he'd turn out to be dead wrong.

It was a bleaker ending, yes, but it's also bolder and in keeping with the themes set up in the film (not to mention the Muppets' raison d'être).  The Muppets are failures.  And whenever they get knocked down, they stick together and try again.  And through their resilience, they succeed.  Gonzo only has one obstacle during the film: his friends' lack of faith in his beliefs.  Sure, he gets kidnapped and everything, but that's all pointless in the grand scheme of the movie.

Gonzo is supposed to be the weird one.  The oddball in a clan of oddballs.  He is supposed to be lonely and strange.  He finally has the chance to find his purpose in the universe.  Find a place where he belongs.  And in this movie...he gets exactly that.  The fact that his friends didn't believe them has absolutely no bearing on the plot because once the aliens come, there is no more argument.  Yep, Gonzo has a family.  Now what?

By changing to the "happier" ending, characters start doing things that don't make sense.  Gonzo decides not to join them without any cause.  In a story, once you give your main character the happy ending, there has to be a pretty good reason for them to turn it down.  Gonzo doesn't join the aliens because in the original script, the aliens weren't his family.  One could argue that Gonzo is having a change of heart and deciding to stick with his true family is better in the long run, but the movie doesn't set that up properly.  He has very little interactions with his friends during the film.  And even when he's reunited with them after the kidnapping, he still has few interactions.  They all treat him like an acquaintance or a co-worker, not a family member.

Had the original ending stayed intact, Gonzo could have still learned the lesson that "your family is who you grow up with."  Plus, it would have kept the mystery of Gonzo's origin alive.  The possibility that he may have been an alien could still be in effect.  But now that it's confirmed...it feels less special. When something stays a mystery for so long, it's best to keep it that way, lest it lose it's significance. 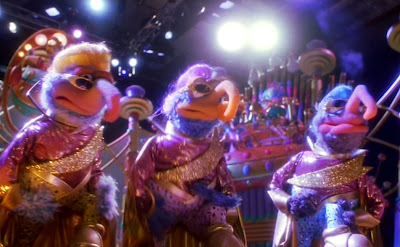 Oh, so now Gonzo isn't special.  That's what this movie is telling us.

Gonzo is one of my favorite characters, and having him in a starring role was a smart move.  He is capable of exploring complex emotions and storylines.  He could have handled an ending that didn't tie everything up in a neat little bow.

This movie had many other problems as well, but the issue of the ending change was the one that irked me the most.  But, while I've got you here, let's run down the rest of the reasons this movie failed:

1) No original music - There was a definite theme of '60s and '70s funk music, which is strange because it doesn't have anything to do with the Muppets or space for that matter.  If they were trying to make this a period piece, it didn't work.  This is the first Muppet movie without original songs and it suffers for it.

2) The movie is trying too hard to stay relevant - Most Muppet movies have a timeless quality to them.  This one dates itself in 1999 and refuses to budge.  The characters use slang that they wouldn't normally say, references are made to modern day pop culture, and it just feels like a late '90s kids movie.  It's hard to put that into words, but the editing, directing, and writing make it feel very similar to other movies of the time like Baby Geniuses, Inspector Gadget, and Dudley Do-Right.

4) It wasted a good premise - And I don't just mean the whole "Gonzo wasn't really an alien" thing.  The idea of making a Muppet movie that focused solely on one of the characters.  That could have reinvigorated the whole franchise!  While I was watching this movie, I kept getting flashes of The Great Muppet Caper, which only kept it's focus on Kermit, Fozzie, Gonzo, and Piggy.  Muppets from Space could have been the start of something great.  Each of these characters are deep and complex.  They don't need to be regulated to repeating their familiar jokes.  After this, we could have had a movie about Fozzie's stand-up career a la The King of Comedy or a Kermit and Piggy romantic comedy or a Spinal-Tap-esque look at the Electric Mayhem.  Instead, we have to stuff all the Muppets into a boarding house and act like they're all friends all the time without any personal lives of their own.

5) This movie should have just been Close Encounters of the Third Kind - This movie attempts to parody many shows and movies at once and it results in a muddled affair.  In addition to Close Encounters, we get plot points from Men in Black, Independence Day, Alien, E.T., and Star Trek.  I say, take out all the other stuff.  This movie didn't need a villain.  The story of Gonzo trying to reunite with his family is solid enough.  It would have allowed for a deeper exploration of Gonzo's character.  The tension between the conflicting beliefs of Gonzo and his friends would have been made clearer.  And, had the movie kept it's original ending, there would have been a nice distinction between the movie and it's source material to make it a classic in it's own right.

I wanted so badly to enjoy this film. I really did.  I enjoyed what dramatic tension there was in the Gonzo story, but it mostly just made me think about what could have been.  Dave Golez and Gonzo are great and the perfect choice to lead a Muppet movie.  But they didn't deserve this one.  During the promotional tour for The Muppets, Kermit mentioned, "with all due respect to Muppets from Space, um, you don't want that to be the last movie you ever do. You want to do a better one." 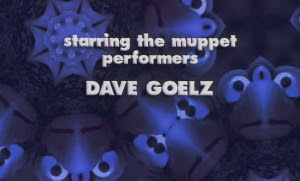 Gonzo: Forever a Whatever

On a more positive note, here is the best joke in the entire film.

Kermit enters the living room, muttering to himself: "Hm, I wish I could find my pants."