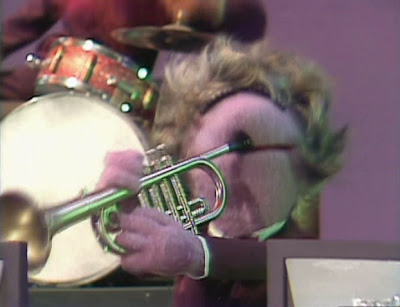 Performer:  Various but Eren Ozker for her one speaking role

The Muppet Orchestra was present for every episode of The Muppet Show because, in addition to providing backup for musical numbers, they played the opening and closing themes of the show.  The orchestra members were such a staple of the show that they blended into the background and rarely warranted much attention.  Of course, this was fine, since the orchestra was mostly comprised of Muppet regulars.

While you may have assumed that the orchestra was simply the Electric Mayhem (which is understandable since there is a lot of overlap), the musicians were actually more varied.  The orchestra was comprised of:

- Nigel the conductor
- Floyd, on bass
- Zoot, on saxophone
- Animal, on drums
- Rowlf, on piano
- Crazy Harry, occasionally on triangle
- and Trumpet Girl, on trumpet. 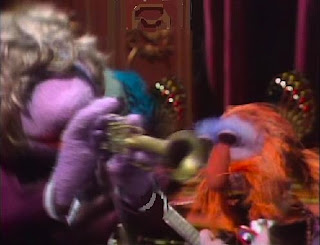 Yes, Trumpet Girl was the only musician who did not have a life outside of the orchestra pit.  Sure, she would appear in group numbers as a singer or dancer, but she was never even given a proper name.  She was a part of the Orchestra first and foremost.  Therefore, her most significant appearance was in the only episode that focused on the inner workings of the orchestra.

Apparently, Floyd is tired of playing the same, old lame Muppet Show theme, noting that it is a square song written by a square...Nigel the conductor.  Yeah, apparently lowly Nigel penned that classic tune. 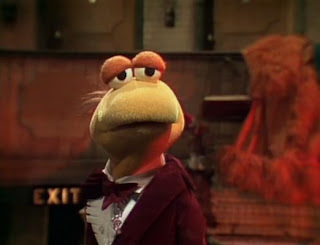 Fed up with not being able to play his own theme song, Floyd riles up the rest of the orchestra and tries to convince Kermit to change the tune.  It is during this moment that Trumpet Girl utters her only line, expressing her opinion of the current theme song: "Drag City."  Floyd and the gang write a new tune to open the show called "Fugue for Frog."  It is a haphazard jazzy mess of a song and Kermit refuses to use it as the replacement. 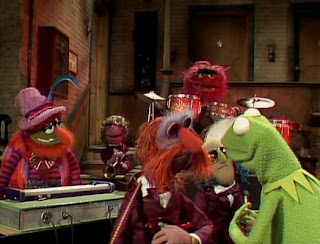 During the closing credits, only Nigel and Rowlf are present to play the closing theme, resulting in a very sparse little number.  Apparently, the rest of the orchestra has refused to return (but we can tell from every other episode that they eventually came back). 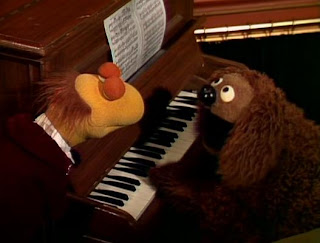 And that's all we really know about Trumpet Girl.

Why is She the Most Important Muppet?

Who is the Trumpet Girl?  Why wasn't Janice used in her place?  What exactly is her purpose in the Muppet Show universe?

One might think we should just write her off.  Clearly she is just a background stand-in puppet with no characteristics or personalities.  No one else cares about her.  It's not like she was important enough to appear in the recent Muppets movie. 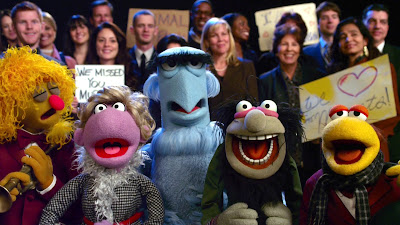 Yeah.  There she is.  They brought her back for this little cameo.  Apparently she was puppeteered by Rashida Jones who dubbed her "Dolores" since she lacked a name.  However, this remains to be made official.

So why go through the trouble of including her character at all?

Well, consider the role of a pit orchestra.  These are orchestras that usually accompany musicals or ballets or operas or a variety of other forms of live-performance.  In each of these cases, the orchestra is not the main attraction.  Sure, they can be wonderfully talented, but rarely do people go to see a musical for a chance to see the orchestra perform.

The pit orchestra musicians are there to provide support through their music.  They are often tucked away, out of the line of sight.  Some are even hidden completely in a room beneath the stage.  They are meant to be heard, not seen.

Trumpet Girl represents this noble profession of nameless artists.  She reminds us that in life, everyone has a part to play.  Without her, the band will fall apart.  A crucial sound will be missing from the group.  "The Muppet Show Theme Song" would sound completely different without Trumpet Girl's presence.  She is a significant member of the group and she absolutely cannot be replaced...

What's that?  You say she was replaced? 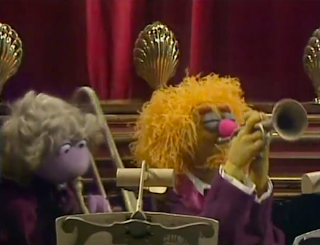 Who is Trombone Girl and why is she the most important Muppet? 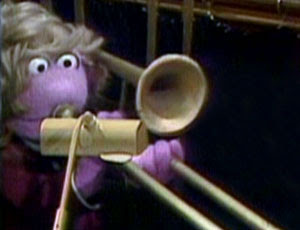