Life is full of decisions.  Any choice can permanently change your future, so it is best to choose carefully and wisely, especially when the matters of body modification are concerned.  Tattoos, piercings, and plastic surgery should not be purchased frivolously.  You must search within yourself and decide that you truly want this new look, before making a monetary and physical commitment.

Or you could just use the Vendaface and not have to think about it at all. 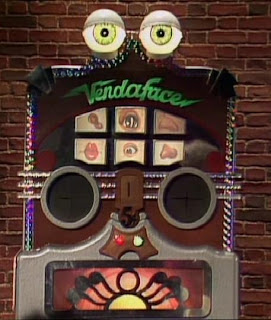 What an odd looking jukebox.

The birth of the Vendaface seems just like the conception of many regretful tattoos that are discovered after a hard night of partying.  At one point someone said, "Wouldn't it be a great idea if.." and then you immediately agreed, "Yeah, totally!" before stopping to consider what this new addition would entail.  So during the night, this product is constructed and you admire it and have a good laugh.

"Wouldn't it be a great idea if there were a vending machine that could dispense body parts to alter the faces of our Whatnot Muppets?"  "Yeah, totally!"

And then a couple hours pass and you realize you're stuck with this thing forever.

Like the Talking Houses or Sesame Street's Sam the Robot, the Vendaface machine was far too complex a puppet to only be used for one 3 minute sketch.  Except, there was only one joke and it had already been told as best as it could have been.  But, in order to warrant the time and money spent creating this monstrosity, the Vendaface machine had to be carted out for a couple more episodes during the first season.  But it was clear that no one was exactly sure what to do with it.

The next person to use the machine was Fozzie Bear, only this time the Vendaface machine presented itself as a sort of mechanical fortune teller or psychiatrist.  And the only joke was that it kept tricking Fozzie into feeding it more coins. 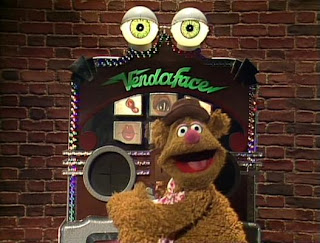 What does any of this have to do with faces?  Nothing.

Later, Statler gave the machine a go.  This time, the writer's discovered another use for the machine.  Well, it was the same use as before, but it was executed in a different manner.  Rather than pick off body parts and replace them with others, the machine would just clock Statler in the jaw. 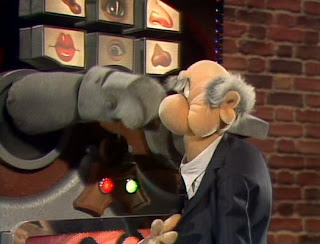 With three appearances down, the Vendaface machine was set to retire.  That was a lot of effort for three measly jokes.  But at least it was put out of its misery right?  Well, for some reason, they dragged it out again one more time a couple of seasons later.  Only this time, it was called the "Vendawish." 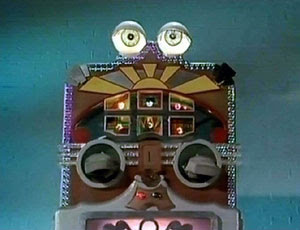 The name plate was replaced with a happy sunshine!

Okay, so now the machine can be used for all sorts of sketches, right? People can wish for anything! The only limit is the imagination! This machine might just yet turn a profit!

Or, they could use it again for one more body modification joke.

Someone just had to tell the story of a man who wished to be taller and got his neck stretched out by the Vendaface/wish machine.  It was a story the world needed to see, apparently.  Don't worry, the man wasn't permanently scarred.  He had a trustworthy Muppet doctor fix his predicament. 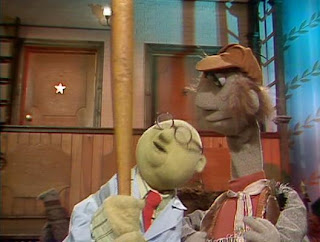 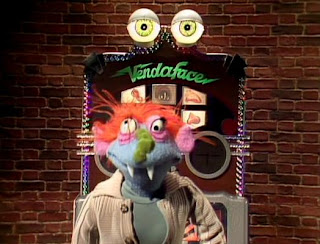 At least one customer was left satisfied.
Posted by John H. at 10:56 PM