The Muppets of the '90s continued their quest to remain in the public eye with a callback of sorts to the original Muppet specials.  Since Henson gained a lot of popularity through his fairy tale adaptations, it was time for the Muppets to return to the well of traditional stories.  Sure, Sesame Street had been dealing with these fables for years, but no one was complaining.  What spawned was a direct-to-video feature called Muppet Classic Theater.  Six short stories were acted out on a "stage" with our main Muppets playing the roles and Gonzo and Rizzo alternately narrating.  It wasn't quite as long as the previous films and the production quality isn't even up to Muppet Show standards, so I hesitate to call it a canonical "Muppet movie." 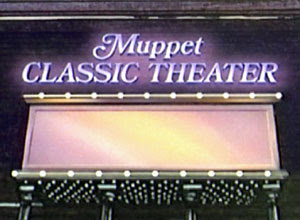 Marvel at the direct-to-video splendor!

But this video played a major role in defining the Muppet aesthetic for the decade and it would even introduce some characters who would appear in later projects with more substantial roles.  So let's look at the tales. 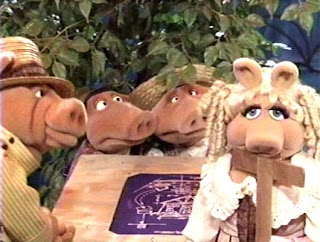 Three pigs build their own houses to protect themselves from the Big Bad Wolf.  The youngest pigs build a house of straw and a house of sticks while the eldest and smartest pig builds one of bricks.  The wolf is able to blow down the houses of the first two pigs, but is unable to destroy the brick house.  He decides to come down through the chimney where the pigs wait with a pot of boiling water.

Miss Piggy plays the eldest pig, Sandy, to her dimwitted brothers Andy and Randy.  Both them and her father don't expect her to be intelligent or crafty because she is just a girl.

Oh, and the wolf is taken out by a rocket.

The story is no longer about being practical and prepared and instead emphasizes that girls are just as capable as boys.  Piggy/Sandy even sings a whole song about how she deserves respect, although, coming out of diva Piggy's mouth, the whole number is very self-serving.  But at least her heart is in the right place. 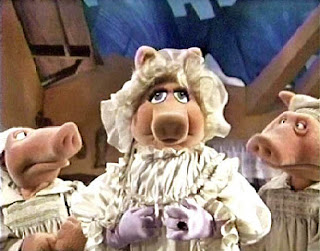 It's hard to be a positive role-model for young girls when you exhibit caustic behavior 90% of the time.

The rest of the story is as straightforward as a Muppet adaptation can be, with slapstick, jokes, meta-references to the original text, and (implied) explosions. 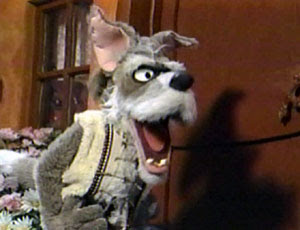 The characters of Andy and Randy Pig first appear here and their numbskullery must have been popular.  They repeatedly headbutt each other, making them dumber and dumber, which is interesting because the Muppets never really had such moronic characters before.  We'll address them more later when they become semi-permanent additions to the Muppet cast. 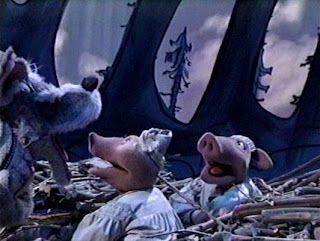 At least they are smart enough to run away from predators.

Rating:  This whole story goes exactly as one would expect, and even with the intended positive moral and amusing characters, it doesn't have much substance to it.  3/5 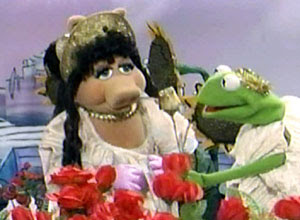 King Midas finds a satyr passed out drunk in his garden and takes him in, treating him well.  As a reward for his kindness, the god of wine Dionysus grants him a wish and Midas wishes that anything he touches will turn to gold.  The wish is granted and soon Midas enjoys all of his new riches.  But he quickly discovers this blessing is a curse as he can no longer touch food to eat.  Even worse, he accidentally touches his daughter, turning her to solid gold.  He asks to reverse the wish and he is told to wash his gift away in the Pactolus River, where the sand slowly turns to gold.

King Midas (Kermit) only wants peace in the world but his wife (Piggy) interrupts him and requests the golden touch power.  Also, Midas accidentally turns HIMSELF into gold, leading Piggy to give up all her new riches in order to save her husband. 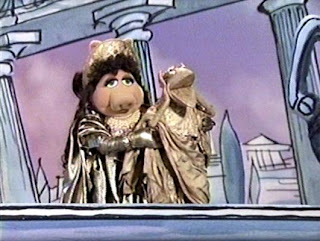 Once again, Piggy is the main focus of the story.  And since Kermit wouldn't be the greedy type, she has to be the one to even make such a claim.  Although, in the original, Midas wasn't particularly greedy.  He just thought that would be a good way to become richer.  Even Kermit uses this power for good, by helping the people of his kingdom by providing them with golden items.  But, that moral isn't as clear cut as "don't be greedy" so Piggy has to stand in for the tragic role. 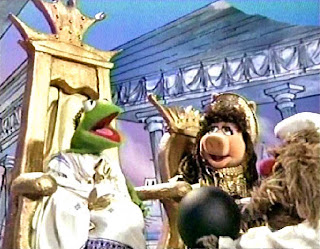 I do like the costume design choice that all of Piggy's clothes are now golden as well.

Also, there is a bizarre twist with the satyr character.  Gonzo plays the satyr and he is also the one to grant the wish, removing Dionysus's part of the story.  As a result, there has to be a reason he gives Midas the opportunity for any wish he desires.  So, after he is discovered sleeping in the garden, Midas, instead of taking him in and offering him hospitality, threatens to execute him for damaging the flowers.  Why is Kermit getting so murder-happy in all of these story adaptations?  He claims that he doesn't agree with that law but HE'S THE KING AND HE CAN JUST REMOVE THAT RULING! 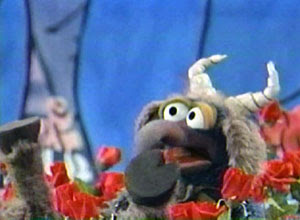 You picked the wrong place to nap.

At the end, he gives Midas one more chance for another wish and once again Piggy blurts in (despite having just learned a valuable lesson) and asks for a juicer.  That's...pretty funny.

Rating:  The twists are creative and in keeping with the Muppet characters, so although the story isn't improved, it is still a solid funny version.  Although, one thing kept bugging me.  The back curtain that the set is painted on keeps getting bumped into by the Muppets and rippling, creating a warped, trippy effect that makes it hard to physically watch at times.  4/5