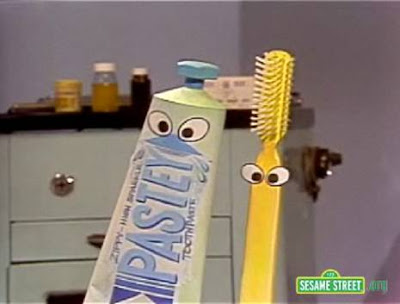 A plaque-fighting duo who are more than simple props.

In another installment of Guy Smiley's "Here is Your Life," Smiley surprises an oddly giant tooth at a dentist's office and proceeds to reunite him with important individuals in his life (even though he sees them on a regular basis). After meeting the carrot and milk that made him strong and the dentist who makes sure he's healthy, the tooth meets Bristly and Pastey, the toothbrush and toothpaste that protect him from decay.

Why Are They the Best Muppets?

Do I really have to explain to you the importance of good dental hygiene?

A toothbrush and toothpaste work in tandem to remove food particles and plaque to keep teeth and gums healthy. The toothpaste works as an abrasive that can penetrate tougher stains and deposits while the toothbrush is the vehicle that spreads the toothpaste around (although the bristles are the tools that actually pick up or knock off the unwanted debris). I couldn't cover just one of these Muppets by themselves because one needs the other in order to be most effective.

But what makes Bristly and Pastey more special than any other toothbrush and tube of toothpaste? Well, for one thing, they serve an absurdly large tooth. 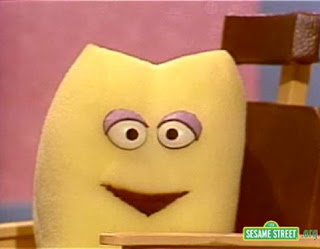 Oh yeah.  This is perfectly normal.

This tooth, which is surprisingly flexible in addition to being over-sized, doesn't live in a mouth. He walks around like a small dog and visits the dentist on his own accord. Yet, they mention his interactions with food and it's clear that he grinds and mashes up edible treats for somebody. It's odd that they would invite some of his victims onto the show. 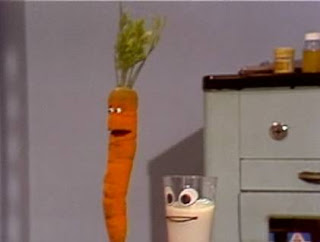 All of these anthropomorphized objects hop around with smiles on their face because it's a kids show and it doesn't have to make complete sense. The point is we're presenting cutesy versions of everyday objects to teach children about good dental habits. We're not really supposed to assume that they exist beyond this sketch.

But where's the fun in that?

So, we have a giant tooth that is accepted by the community as a living creature. He willingly hunts down other sentient creatures that can walk and talk just like the rest of us and they welcome his presence, since it is their lot in life to be consumed. Finally, he is joined by Bristly and Pastey. Notice how, unlike the carrot and milk, this tooth-cleaning pair doesn't possess mouths. They emit muffled cheers of affection when they come on screen, but they cannot communicate. They can't even blink! They just stare vacantly at their master, willing to protect and serve him, no matter the morality of the situation.

This is the scary reality that occurs when anything can be a Muppet. In cartoons and children's entertainment, one only needs to add a face to an object and it imbues it with a soul. Bristly is forced to watch as he (she?) is jammed into a mouth, scrubbing bacteria and grime with his/her face. Pastey's innards are squeezed out, bit by bit, day by day, until he/she has expelled all of the contents of his/her body.

Bristly and Pastey, mute and cheerful, understand that this is the hand life has dealt them. They have a purpose and it is an unpleasant one. And none of this would be the case had the puppet designer simply not added eyes to an ordinary toothbrush and toothpaste tube. We gave them life when maybe they were better off being inanimate. 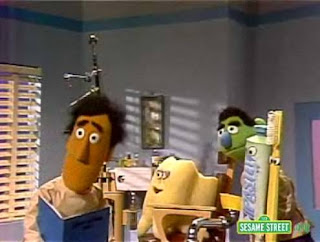 This may be the most frightening dentist's visit ever.
Posted by John H. at 10:56 AM