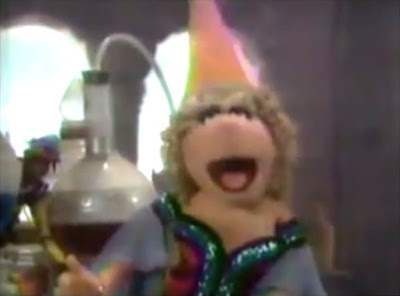 A sorcerer's apprentice who is only there to make her boss look good.

"MuppeTelevision" had many similarities to The Muppet Show, one of which was the batch of recurring segments called "Merlin the Magician, M.D."  This sketch was a spiritual successor to "Veterinarian's Hospital," with the setting changed to medieval times.  Instead of Dr. Bob, Rowlf now played Merlin and he would treat patients with a more spiritual (and outdated) method of cures. 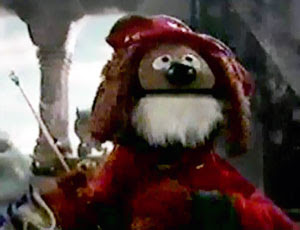 Only Rowlf could make a beard look good on a dog.

Rowlf was not joined by his nurses Piggy and Janice this time around (probably because Frank Oz and Richard Hunt weren't part of the full cast for the show), so instead he was joined by a nameless assistant voiced by Fran Brill.  And, much like any magician's assistant, she only served to draw attention to Merlin's "tricks."  Except his tricks were more puns and punchlines, so she would emphasize each joke with a "Ta-da!"

In the couple times that this sketch appeared, Merlin's assistant would announce the patient and their ailment (which always seemed to involve something stuck in their head). 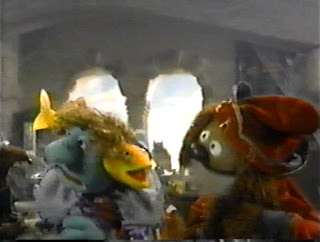 How does one even get a fish in the head?

Merlin's assistant combines two familiar sound cues to trigger a response from the audience.  "Ta-da!" is usually said right after something amazing or impressive has occurred while a joke is punctuated with a drum sting (sometimes called a rim shot).  In both of these cases, the sound lets the audience know that the goal of the performance has been achieved and it is time for them to react.

When it comes down to it, these sounds should be completely unnecessary.  If the preceding event is so great, shouldn't the audience respond naturally?  A sound cue just assumes that the audience isn't intelligent enough to pick up on the humor on their own, so it provides a familiar noise so that the audience can respond at the appropriate time.

Merlin's assistant's job is even more useless because, not only are the punchlines painfully obvious, but an actual musical sting underscores her "Ta-das," making her pointless task redundant as well.  Take that away, and she has nothing to do but stand there and look pretty while the magician does all the interesting stunts. 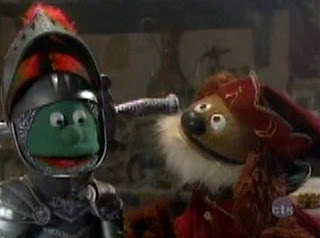 For my next trick, I shall pull a bloody sword out of a dying knight.

The role of a magician's assistant has undergone heavy scrutiny during the years since its inception, with many pointing out that the assistant is often put in situations of "peril," invoking the "damsel in distress" routine.  The assistant's presence only reinforces a notion that women are subservient to men and incapable of helping themselves.

While some assistants have gone on to receive top-billing in their magical acts by becoming more involved in the "magic" process, Merlin's assistant appears to have gone in the other direction.  She doesn't interact with the tricks in anyway, mostly keeping her distance.  And when she does come on screen, she just bothers Merlin.  The sketch and the patient would be just fine without her.

Tragically, her days on television ended when the show was cancelled.  We never did get to see what she did after this.  We don't know if her life got better or worse.  We can only guess.

But there is one silver lining that came from all of this.  From this day forth, we can never hear the phrase "Ta-da" again without thinking of her.  She has a legacy now.
Posted by John H. at 12:16 AM