Taking the earnest advice from Neville, Piggy/Holiday and Kermit head off to dine at the Dubonnet Club (which is really more of a supper club than a restaurant).  Piggy must first endure a ride on this movie's equivalent of the Electric Mayhem bus from the first film, with every puppet along for the ride.  The band jams on the roof, singing the song "Night Life."  The vehicle looks cool, but the number isn't up to usual Mayhem standards. 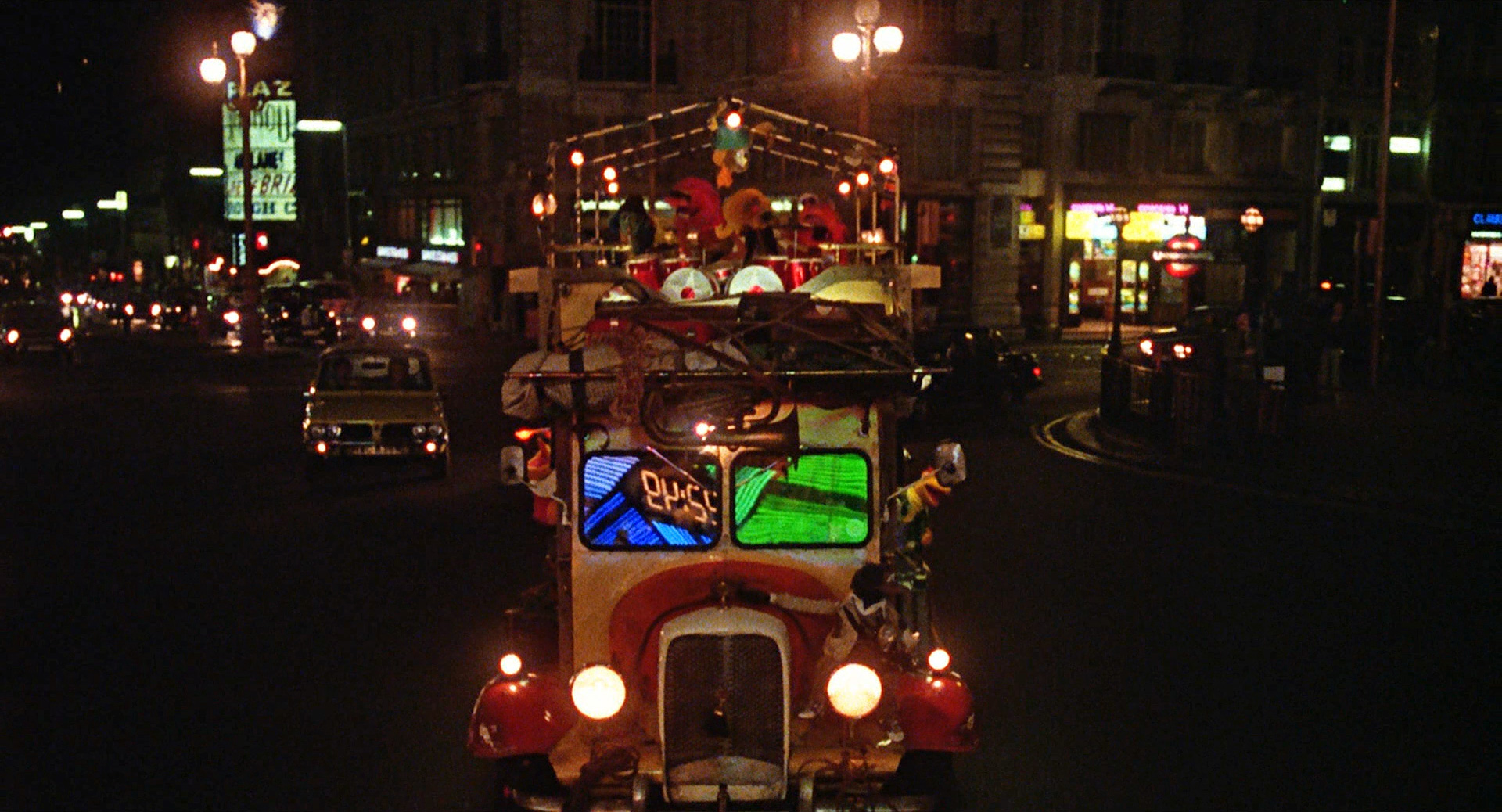 Fortunately, the tagalongs stay in the caravan as the main four proceed inside the club for dinner and the interview.  And, it immediately becomes apparent that their money will be no good at this upscale establishment. 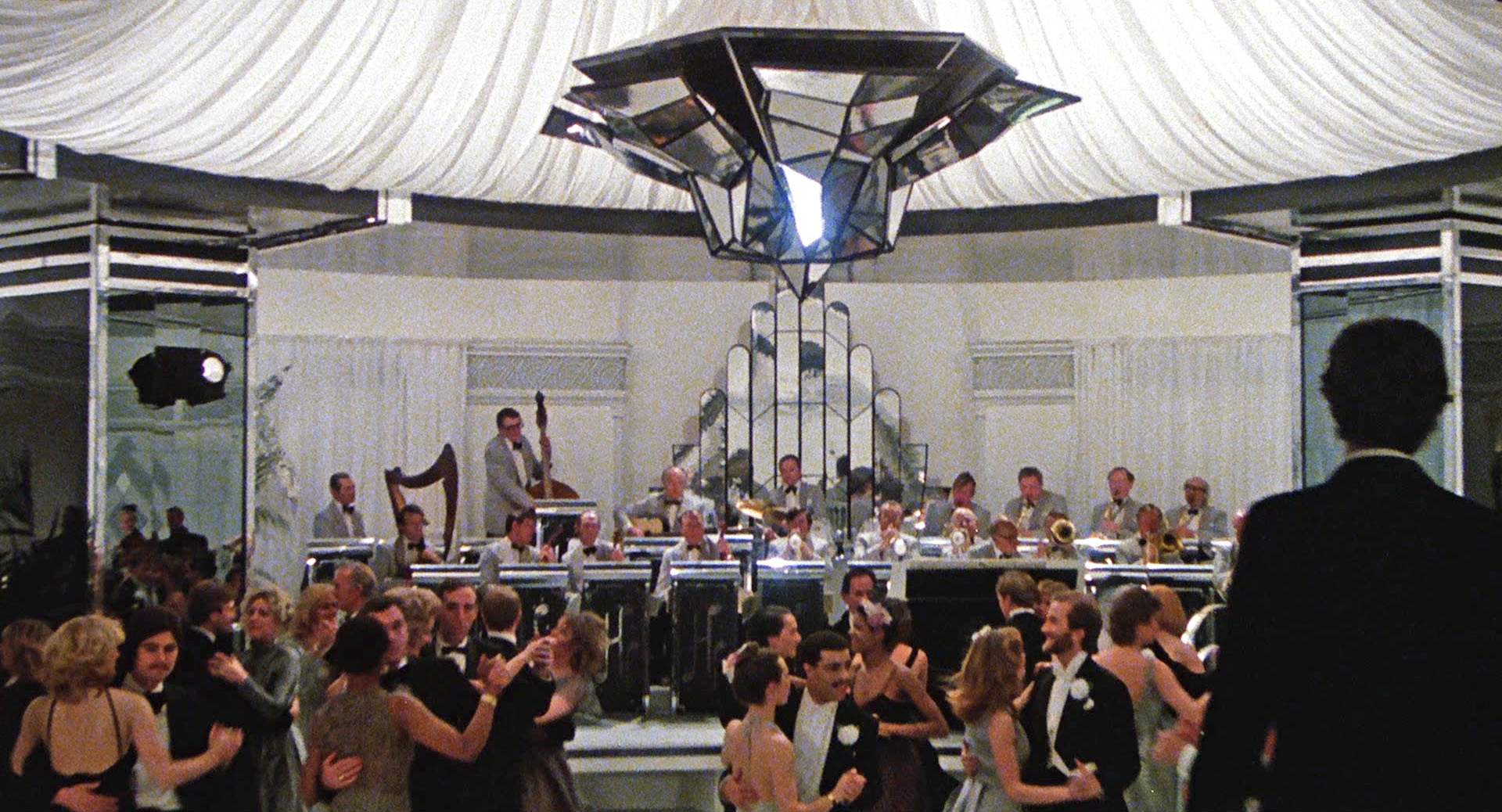 Gonzo decides to hustle patrons for cash by providing them with "complimentary" photo souvenirs that cost $10.  I understand that the customers will be wealthy enough to forgo the cash, but did we forget that this movie is set in England?  Why would people be carrying American cash?  Oh well, this just gets Gonzo moving around the room to set up a plot point later. 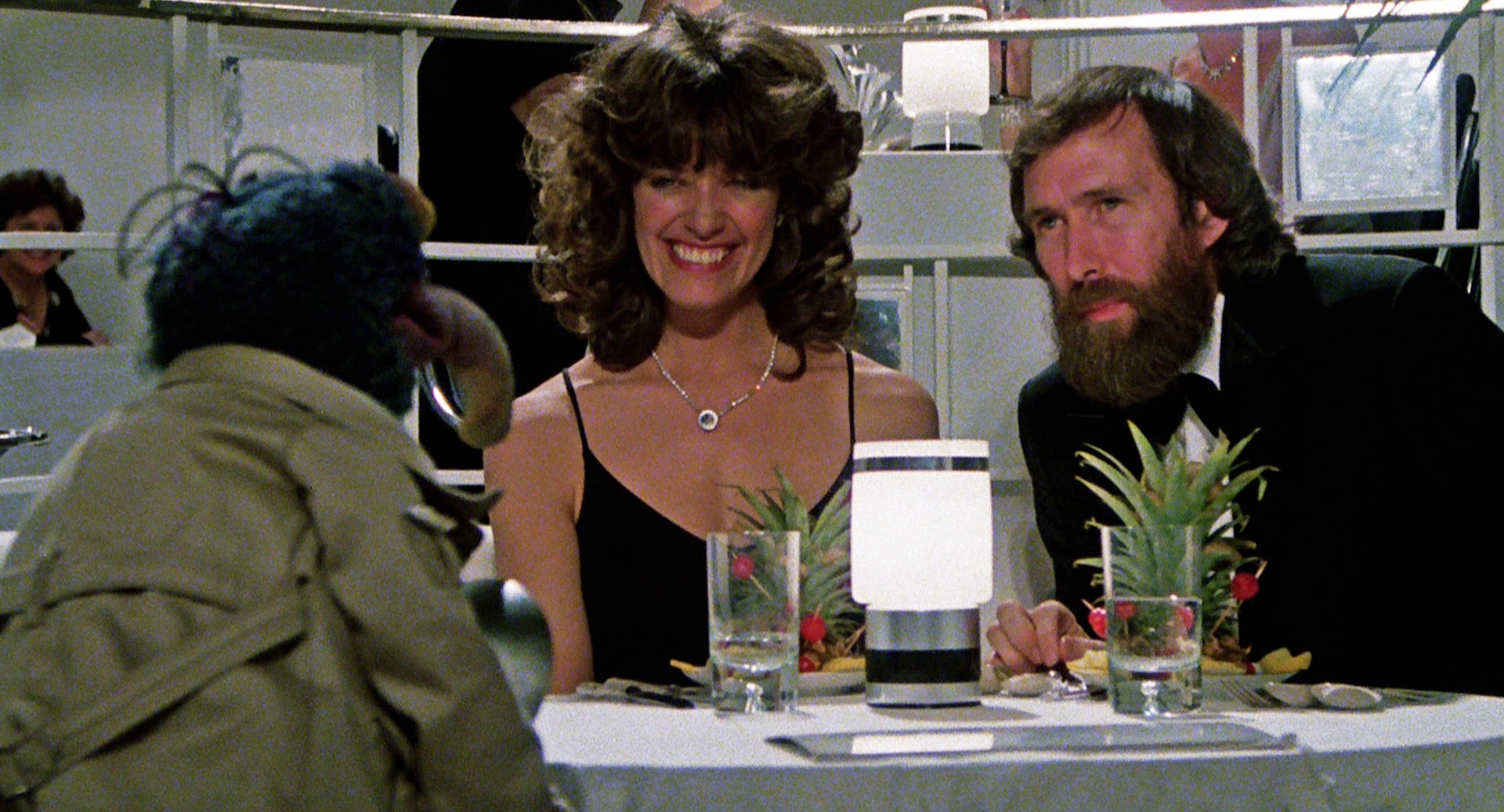 And to work in a Henson cameo.  Hi, Jim!

While Piggy/Holiday and Kermit make googly eyes at each other on the dance floor and Fozzie combats his loneliness by adding heaps of sugar to his martini, the actual Lady Holiday arrives to dine, along with her leech of a brother, Nicky.  And he is the best!  It doesn't even matter that he is American while she is British.  Charles Grodin makes the most of this role as soon as he appears on screen.

I wonder who the jewel thief is going to end up being...

Grodin takes a great deal of pleasure in becoming the slimiest, whiniest man who ever graced the screen.  While some celebrities act awkwardly during their Muppet interactions and others act naturally,  Grodin acts Muppety.  He is completely over-the-top, yet it's clear he is not forcing it.  He knew he was going to be in a Muppet movie and so he was going to make the absolute best of it.  In case you didn't catch the opening scene, Grodin is our villain, and he puts Doc Hopper to shame.

Meanwhile, the next musical number is about to begin, and it is the movie's centerpiece.  It is a love song called "The First Time It Happens," and without warning, Piggy is the center of an elaborate dance routine, even though it doesn't make any sense at all.  But it is still a spectacular moment for all you Kermit-Piggy shippers.


This is Caper's "Rainbow Connection."  It's straightforward, but it captures that moment of falling in love in a way that makes sense.  It deliberately inverts the common tropes of love, such as birds singing and skies clearing.  It states that nothing dramatic occurs and there is no magic, but you know in your heart that something significant has occurred.  On its own, it is a very sweet song.  Matching it with the show-stopping performance that the whole club participates in serves to remind us that our expectations are being toyed with. 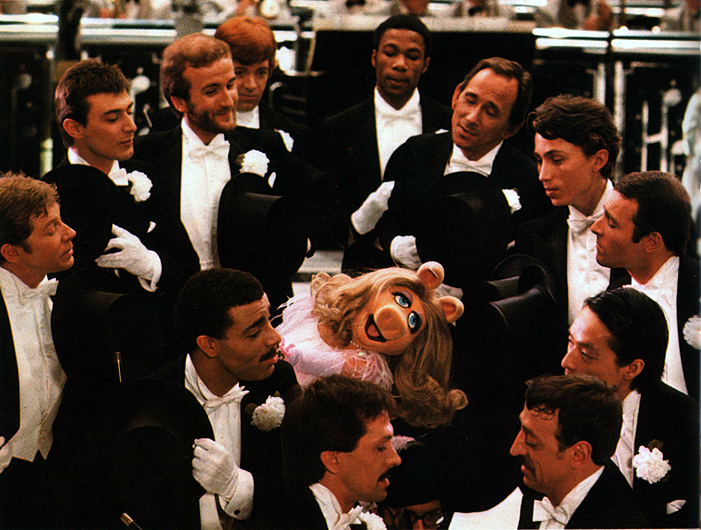 Such a quiet moment, the first time it happens.

After the song, the lights go out and Nicky pockets Holiday's diamond necklace.  The lights come back on and Holiday shrieks, prompting Grodin/Nicky to provide some golden quotes in the chaos to deflect blame away from him: "She screamed right in my EAR!" and "I JUST SPILLED KETCHUP ALL OVER MY CUMMERBUND!"  I wish I had this clip, so just imagine a grown man acting like a spoiled baby.  That's our villain.

Kermit now learns the truth, that Piggy was not Holiday.  She dashes off, leaving behind a glass slipper, because DUH.  But no time for that, because Gonzo got a picture of the thief!  They convert the Happiness Hotel's loo into a dark room to develop the film, and right when they discover Nicky as the culprit the rest of the guests open the door and over-expose the picture.

At least Fozzie and Gonzo were able to pat their heads and rub their tummies at the same time first.

So, even though the gang has just figured out who the thief was...the film has to resolve the Piggy/Kermit issue first.  Kermit heads to the park to wallow in pity, as Peter Falk walks by to help the poor fellow.  If John Cleeese weren't in the movie, this would be the best cameo scene.


As Kermit attempts to get the movie back on track, he runs into Piggy who tries to explain her actions.  And, because the fourth wall means nothing in a Muppet movie, Piggy has a meltdown when Kermit criticizes her acting (as she is wont to do).


Don't worry, all is eventually forgiven and love can blossom in the form of a bike ride.  Now, in The Muppet Movie, Kermit rides a bike for about half a minute during the beginning.  And that was all anyone would talk about when discussing the movie.  Henson always felt that the more complicated aspects of the movie were overlooked for this cheap trick.  So this time, he decided he is really going to wow people.  Not only will Kermit ride a bike, Miss Piggy will, too! 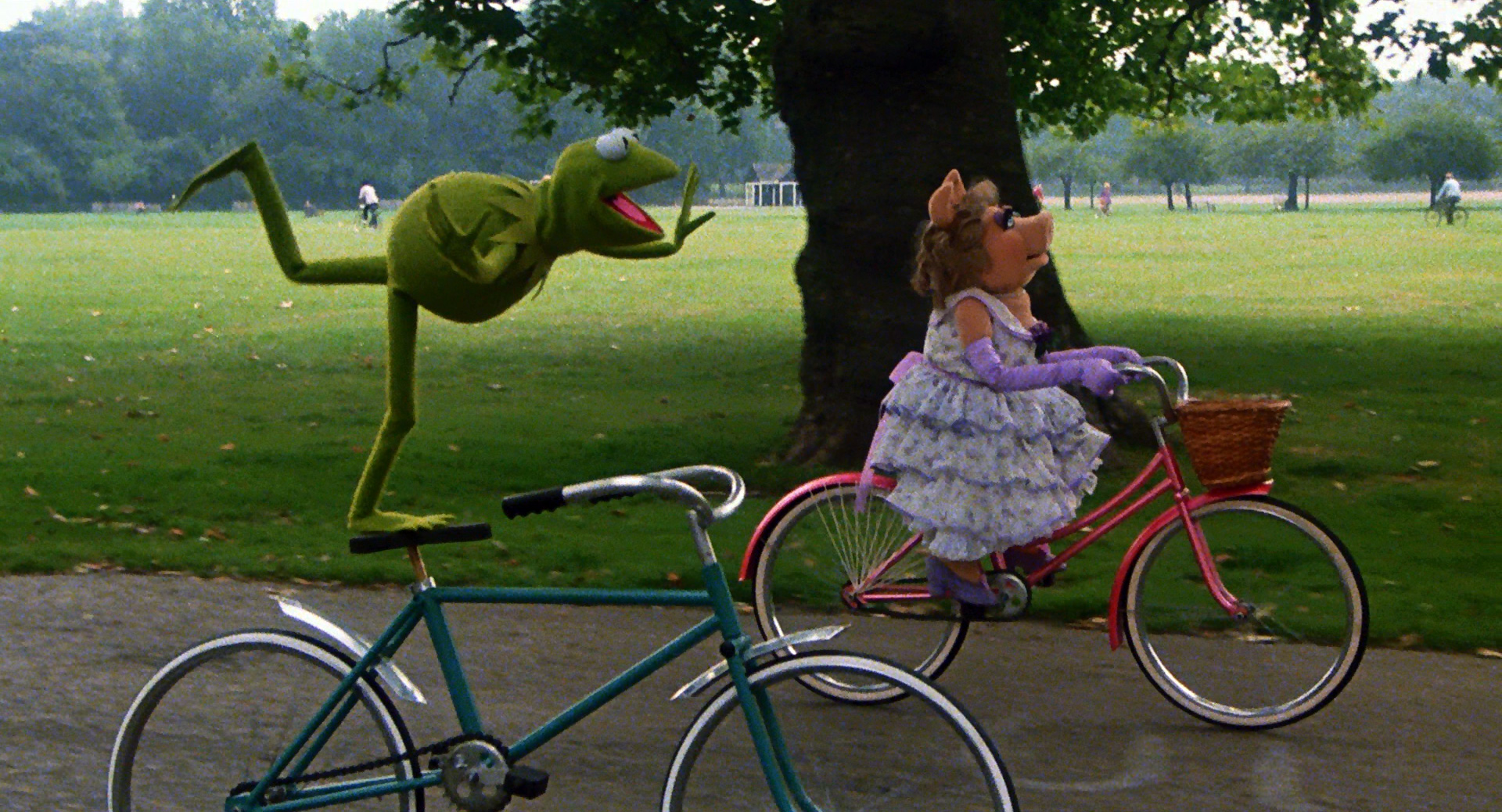 And Kermit will do stunts!

Oh heck, why don't we just have EVERYONE ride bikes!

THIS IS WHAT YOU WANTED!!!

Tomorrow, the romance will ht another speed bump as Nicky decides that jewels aren't enough for him;   he is also very fond of pork.
Posted by John H. at 11:00 PM