A Protective Layer of Felt

The psychology of using a puppet to aid in conversation reveals some fascinating things about human interaction.  In certain cases (usually those involving young children), an adult will don a puppet and have the puppet talk to the patient to extract any thoughts that the patient may be reluctant to share.  In other cases, the patient will use the puppet to create an alternate version of themselves, one who can reveal their true feelings and intentions.  In either scenario, the puppet is used as a "safety" barrier.  The colorful character is able to do whatever they want without any repercussions because they are fake.  Alternatively, the puppets will keep all of your secrets for the same reason.  So, even though both parties who engage in conversations with puppets understand fundamentally that the character is fictional, it is easy to forget.  Especially when the puppeteer is skilled at improvisational speaking.
The Muppets often appear "as themselves," in some large attempt to convince the world that they are not simply just characters.  Talk show hosts and other celebrities frequently enjoy talking with the Muppets, because they know they can just let loose and joke around.  They get so caught up in the moment that they sometimes forget that there is another person, hidden below, that they are actually conversing with.  While every puppeteer who appears with their signature character has fun during real-life guest spots, no one quite approaches it the way Frank Oz did with Miss Piggy.
During the years of 1995-1996, the Muppets were coming back into the public consciousness strongly.  It had been over 5 years since Henson's death and 3 years since the last movie.  So, Oz found himself suddenly very busy as he had to promote Muppets Tonight, Muppet Treasure Island, and a promotional cookbook called In the Kitchen with Miss Piggy.  One of Piggy's first stops was on Martha Stewart's annual Christmas special, "Home for the Holidays." 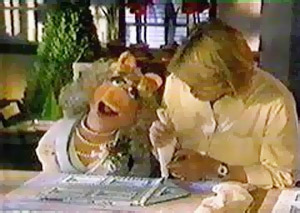 Piggy trying her best to remain pleasant.
Martha Stewart had become quite the force in the media world with her eerily robotic approach to home living and obsession with home decor.  She was wealthy and powerful, and, as evidenced by her sepcial, many of her guests often appeared uncomfortable while slaving away at arts and crafts.  Frank Oz had﻿ a rare opportunity by appearing as Miss Piggy.  Not only was he free from actually doing any work, but he could speak his mind about the banality and absurdity of the show without getting in trouble.
Throughout the segment, Miss Piggy complains and wryly remarks on the minutiae of constructing an enormous gingerbread house.  As the segment continues, Piggy becomes bolder, nearly insulting Martha with every single line.
Eventually, it becomes clear to Frank that Martha is barely paying attention.  At one moment, when Piggy attempts to introduce herself to Martha's handsome male guest, Ms. Stewart enigmatically says to herself, "Miss Piggy is speaking."  It's a bizarre thing to say.  It's as if she finds novelty in the fact that a doll somehow came to life and is disrupting her gingerbread construction.  Piggy just keeps trucking along, trying to keep the focus on herself as much as possible, because it's more interesting that what Martha's doing.

Despite Piggy's rude behavior, her appearance was a huge hit.  It was the most enteratining moment of the whole special, so Piggy was invited back to the show the following year.  Again, Piggy doesn't hold back any of her thoughts, noting that every step in creating Stewart's "Snowflake Cookies" is borderline obsessive.


Once again, Oz is clearly trying to have as much fun as he can with this task, and Stewart proves to be a good sport in agreeing to have Piggy ridicule her throughout the episode. 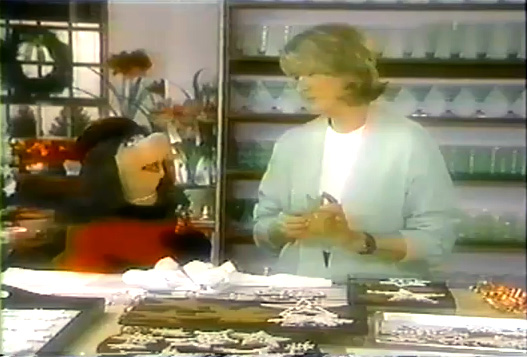 Dragées!﻿
Although Piggy was classified as being a diva, it was these appearances outside of the shows and movies that suggested perhaps Oz was embracing that aspect and running with it.  She was never this snarky on the show.  But, while the Martha Stewart appearances were arranged so that Piggy could make jokes at the host's expense, nothing quite matched the meltdown Piggy experienced on Live with Regis and Kathie Lee!

The lines between reality and fiction have never been so blurry as they were during the following 10-min segment.  The segment was arranged to allow Piggy and Regis to demonstrate a recipe from her cookbook.  The book, by the way, was a compilation of recipes contributed by other celebrities, and not actually written by Piggy herself. 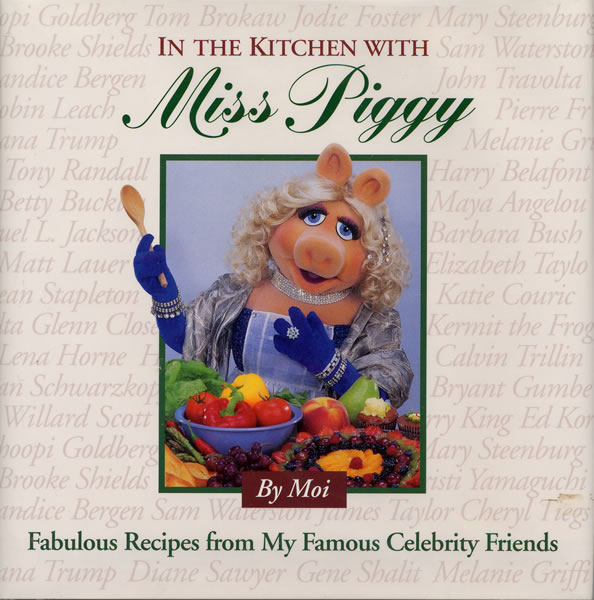 This is made clear on the front cover.
A portion of the proceeds went to a NYC non-profit known as Citymeals-on-Wheels.  The book, if anything, was one of Piggy's nobler contributions to society.  She didn't come to make enemies that day.  However, for some reason, Regis and Kathie Lee decided to be exceptionally rude to her, trying to provoke an angry reaction out of her.  Because when Piggy gets angry on TV, it's funny!  Piggy, not expecting such treatment, reacts as anyone possibly would in this situation.  What follows is a character study that shows the bond Oz shares with his puppet.

Almost immediately, Kathie Lee accuses Piggy of not considering her for the celebrity cookbook.  Both she and Regis begin making some unflattering comparisons between her and Dolly Parton (who had shown up in a flamboyant outfit in an earlier episode).  Some name-calling begins and Piggy is able to retaliate for a bit, but she grows tired and just wants to get focused.  When the hosts don't relent, Piggy begins to get very snappy with all of her answers. Eventually, she decides that she wants it all to be over and refuses to help Regis with the recipe, imploring him to hurry it up.  It only gets worse from there.

Kathie Lee continues to harp on the fact that she wasn't included and feeling she must defend herself, Piggy insists that Kathie Lee had been considered and that she had consulted Frank about it.  For the audience, this exchange may have been a little confusing, but Piggy is talking about Frank Oz.  This is rare in the Muppet world so it is clear that Kathie Lee had said something that struck Oz on a personal level.  He/Piggy starts refering to some past romantic liason that may or may not have actually occurred.  It was due to this that Kathie Lee was not included.
During this whole exchange, the crowd starts getting very silent.  At first they were laughing at Piggy's antics, but now there is some drama occurring onstage.  Piggy tries to liven the mood again, but her jokes fall flat and Regis tells her to shut up so he can finish.  And, in another extremely rare moment, Piggy just shuts down into a ball of sadness.  She refuses to interact with either host any more.  She just keeps saying, "I'm hurt" over and over again, and insists that they leave her alone.
What started as another fun Muppet appearance ended in despair.  Regis and Kathie Lee had unintentionally crossed some line, due to their lack of respect for their guest.  Piggy may have been fictional, but the arm she was attached to was not.  It's unclear as to whether the puppet or the man was hurt the most, but what was clear was that the hosts crossed a boundary.  All guests should be treated humanely.  By using Piggy as his barrier, Frank showed just how inconsiderate people can be when they feel that there are no consequences from their actions.
In this moment, there was no "Frank or Piggy."  It was Frank and Piggy.  A single unit.  Frank had become so skilled in embodying his character that there was no longer a distinction between them.  His defense mechanism took over, and for a brief moment, Piggy became human.
Posted by John H. at 9:59 PM