The first season of The Muppet Show suffered from a lack of focus that was hurt by the random assortment of celebrity guests.  These stars of stage and screen were performers of all types (actors, singers, comedians, puppeteers) meaning audiences never quite knew what to expect when they tuned into each episode.  The fact that many of these guest stars were usually a) unknown outside of their field, b) past their peak of stardom, or c) not in-sync with Henson's perforamnce style made it extremely difficult for the show to find a consistent audience.

This all changed on October 22, 1977, when the buzz over that week's guest brought in a larger audience than the show had ever seen.  This was the episode that put The Muppet Show on the map, turning it from a cult-favorite to a hit!  Ballet and puppetry came together in "Episode 213: Rudolf Nureyev." 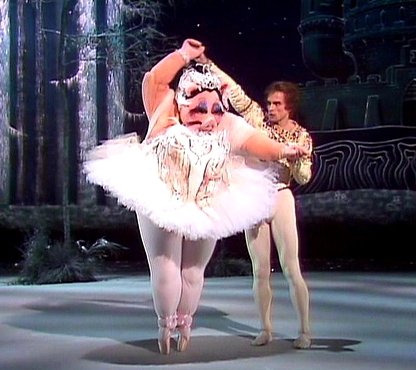 This episode was en pointe! (Part 1, Part 2, Part 3)
Having the famed Russian ballerina Nureyev appear on such a wacky program was going to be interesting to say the least.  At least the previous guest stars had some familiarity with the comedy world.  But Nureyev had been making huge waves among upper-class, breaking norms set by established male dancers.  He was one of the first male ballerinas who actually...moved.  Before him, men in ballet were little more than human support systems for the women.  He was a huge draw and everyone was curious to see how a guest like him would work on a show as weird as The Muppet Show.
Anticipating such a reaction, the writer's put Sam the Eagle in charge of the night's proceedings.  As the voice of the conservative older generation who saw the Muppets as unnecessarily odd and disgusting, Sam decided it was his duty instill as much culutre into the show for tonight's guest.  However, in his usual narrow-minded fashion, Sam was completely oblivious to who Nureyev actually was, proving that his arrogance was misguided as well as unwelcome. 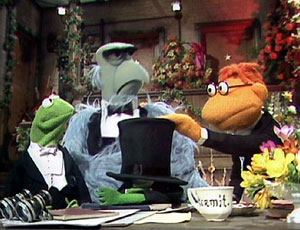 And if you're going for class, you've got to put everybody in tuxedos.


The show opens with the Electric Mayhem trying their best to be pleasant for the grandparents watching at home by playing Boccherini's "Celebrated Minuet."  And, of course, Animal can't handle it. 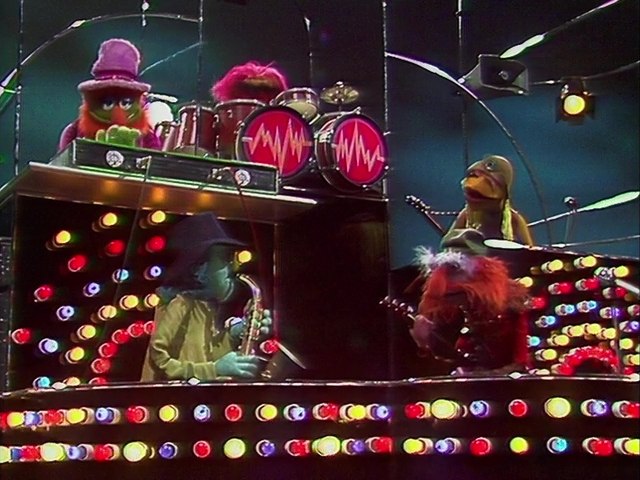 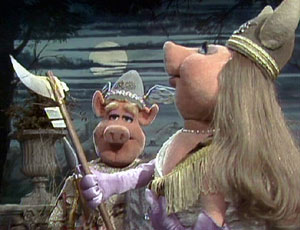 At least Link and Piggy look the part.
Finally, after mostly staying absent for the first half of the episode, Nureyev perfromsa classic Muppet Show moment, "Swine Lake."  When he was choosing the Muppets he wanted to work with, Nureyev only had one request, that he dance with Miss Piggy.  Unfortunately, Miss Piggy doesn't exist below the waist, which meant the audience would be unable to see Nureyev's talent.  Instead a compromise was reached where a new female ballerina pig would be constructed specifically for him and he would perform a duet with Piggy later on.  Despite this, being a different pig (performed by Graham Fletcher, who performed any full-bodied dancing Muppets), many people to this day still think this is (or is supposed to be) Miss Piggy.  Either way, "Swine Lake" is a significant moment in the run of the series.
Nureyev was not only able to dance wonderfully, he could dance comedically as well.  The image of such a large ballerina that could move so gracefully was an unusual sight for television.  High-brow and low-brow joined in this masterful dance, proving that the show really did have something for everybody.  If such a high-class performer could freely let himself get silly once in a while, anytthing was possible.

Even though the show was going through it's usual routine of absurdity, there where many jokes throughout the episode that called for a higher-educated viewer, as could be seen in the often-dumbed-down "Veternarian's Hospital."  This week, Hamlet was on the operating table and there were Shakespeare jokes a-plenty. 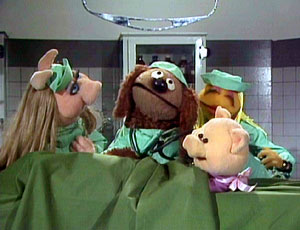 And yes, they do reference Bacon as well..
Nureyev appears again to perform his duet with Piggy, which turns into a role-reversal version of "Baby, It's Cold" outside in which Piggy tries to seduce Nureyev, both of them clad only in towels.  This may have been the most overtly sexual scene that ever appeared on the show (Sam the Eagle surprisingly doesn't have a heart attack during this song).  But it kept the audience in their seats, glued to their sets.

To cleanse us after that disturbing moment, Rowlf performs "Clair de Lune" as Fozzie tries to help him class up the piece with a candlestick. 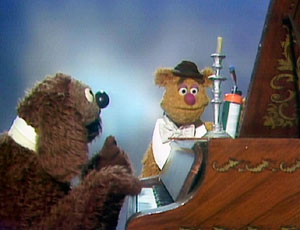 And a blowtorch.
For the closing number, Nureyev puts on a different pair of dancing shoes, tap-dancing to "Top Hat, White Tie and Tails."  The rest of the cast joines him, in their own classy outfits and Nureyev ends the pieces by using his tapping to imitate the sound of machine gun fire.  Because The Muppet Show always has to end on a bang. 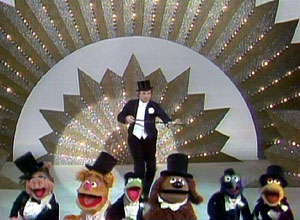 Fortunately, Nigel is one of the first to go.
As the show draws to a close, co-host Sam realizes that he had made a grave mistake.  Rudolf Nureyev was not going to bring dignity to the Muppets.  Instead, he was just as weird and uncouth as they were!  There was no helping The Muppet Show.  Fortunately, the audiences didn't agree with Sam.  This was the first episode many people saw and it was what made them fall in love with the cast of characters.  There is a time and place for high-art and it wasn't going to be found here.  But if you wanted humor and art that appealed to everyone's tastes, it could be found on this weekly program.  Nureyev made it safe for anyone to work with the Muppets.  He sunk to their level and emerged unscathed.  The show was now culturally relevant, and it never looked back. 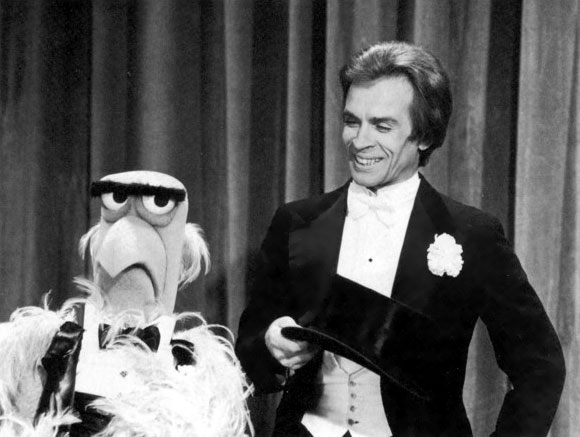 Even if they still are just a bunch of weirdos, they are weirdos we couldn't live without.
Posted by John H. at 3:44 PM