A farce is that special brand of comedy that I once heard described as "door comedy." This refers to the trope in which the madness of the story has escalated to that frantic moment where characters run in and out of doors, narrowly missing each other, as seen in many a Scooby Doo episode.  While doors are not a requirement for a farce, the confusion felt by the characters is.  Mistaken identities, fast-paced action, and an improbable situation are the key hall marks of this genre.  And it just so happens that the next three scenes in the movie showcase these three elements!

As Lady Holiday leaves Piggy to tend to her receptionist duties, Kermit and his crew arrive to interview Holiday for the news, barely missing Holiday's top three models scheming over their attempts to rob her.  Kermit walks into the office as Piggy parades around the room, excited to be on her way to becoming a model.  When Kermit mistakes her for Holiday, of course, Piggy plays along with it.

She looks just like Diana Rigg.  It's easy to see how Kermit got confused.

This development further emphasizes the idea that we as the audience are not supposed to perceive these characters as playing roles intended for the Muppets.  Piggy and Holiday are just as identical as Kermit and Fozzie are.  Of course, Kermit never really got a good look at Holiday in the first scene.  Piggy, however, gets a good look at Kermit and instantly falls for him. 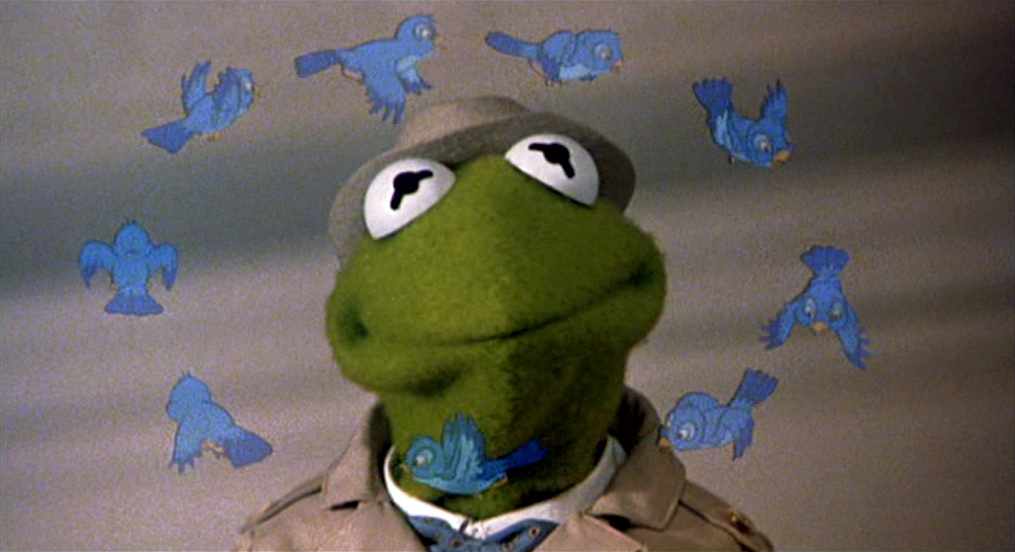 And here's the movie's token jab at Disney movies.

The two arrange to meet for dinner for the full interview, but it's clear that this will be a romantic evening between the two.  Piggy feeds Kermit a fake address in on a highbrow street so that she can keep up the charade all night.  And now we have our first box checked on our Farce Scoresheet.

Up next, is the madcap action sequence.  As a way of introducing another recent addition to the Muppet Show cast, Beauregard the dim-witted janitor appears as a taxi-driver.  And, like the other "local" Muppets, he isn't British at all.  He takes them on a wild ride back to the hotel (where he is also a resident, of course).  This scene was reused in the special The Muppets Go to the Movies as part of their tribute to action movies and stunts.  Basically, this scene is like a pointless car chase sequence used to make a movie more "exciting," except it's even makes even less sense because there is only one car involved.

The trip ends as any Muppet sketch should.  With mass destruction....

...and another Swedish Chef dish ruined.﻿ 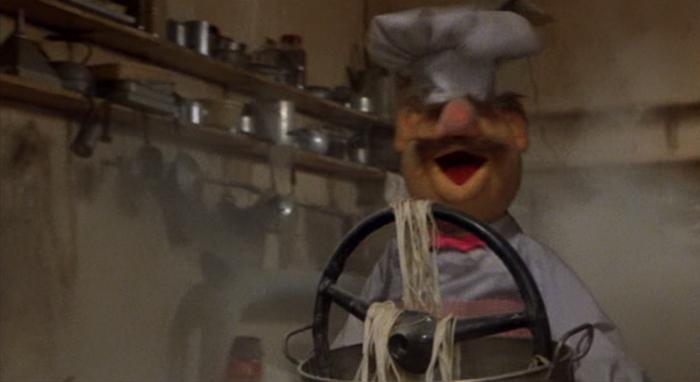 The secret ingredient is wiper fluid!

Up in the bedroom, Kermit and company prepare for a night out.  While some drama is established, hinting at Piggy/Holiday potentially driving a wedge between the twin brothers, the plot has to be put on hold for a Gene-Kelly-esque musical number.  They literally stop the story and drop all hints of tension just for the song, and it is picked right back up at the end as if nothing happened.  Because that's how it goes in the movies! 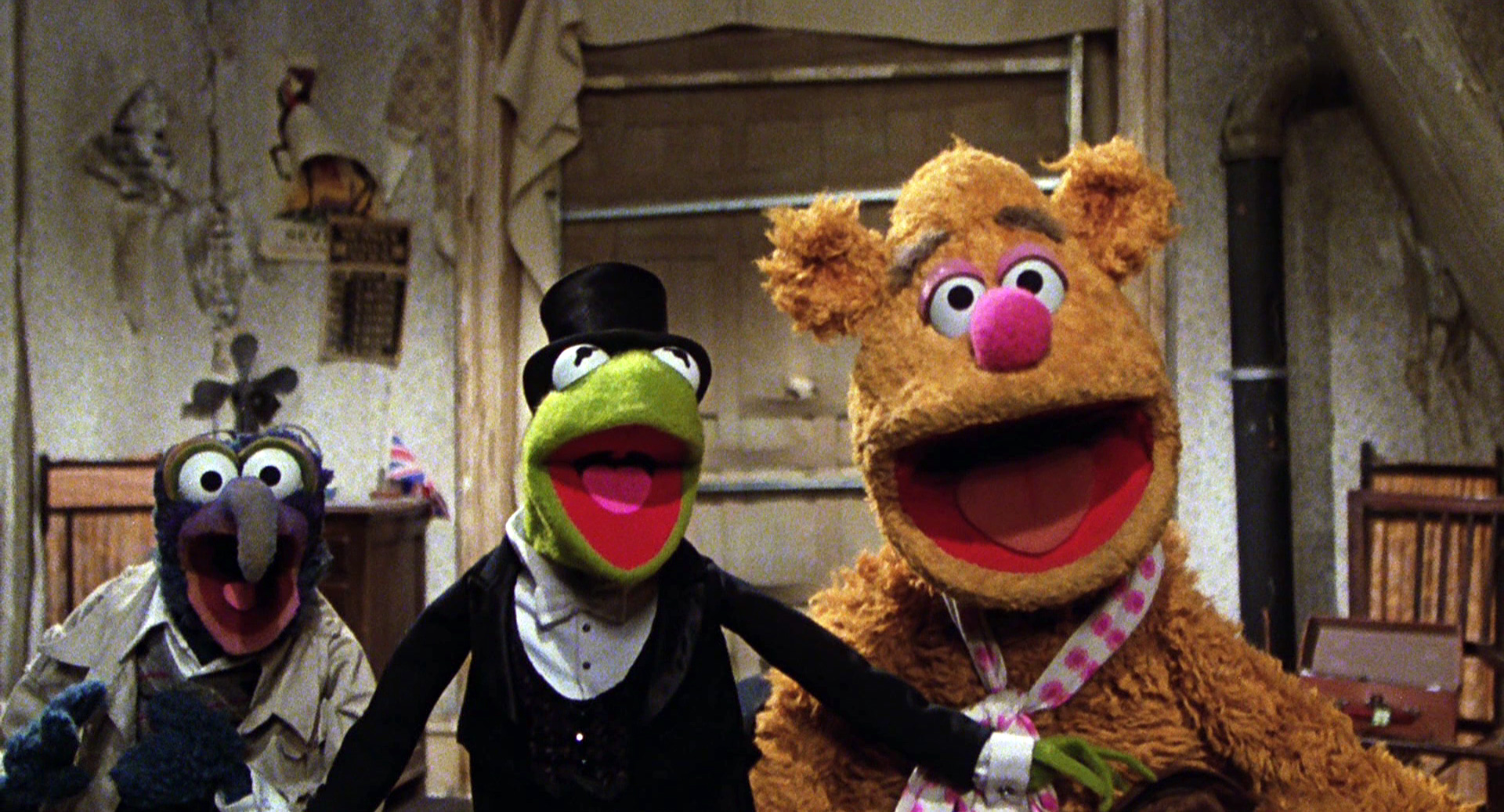 There's always time for a song!

At the end, Kermit agress to let Fozzie tag along on the date and, by proxy, every other Muppet gets to come too.  Sure, why not?

Okay, we now come to the most British scene in the movie.  This will complete your farce trifecta.  So as not to ruin the moment, I implore you to watch it in it's entirety.  Remember, Piggy has given Kermit an actual address in order to pass herself off as Lady Holiday.  (Pay no mind to the Greek subtitles.)


Did you watch it?  Go back and watch it.

This scene has absolutely no bearing on the rest of the film.  It doesn't affect the plot and it could have easily been skipped.  But then, we wouldn't have this brilliant send up of the British upper class, beautifully illustrated by Joan Sanderson and John Cleese.  Cleese, really, is what makes this scene.  I would say that this may be even better than his entire Muppet Show episode (which he co-wrote).  His attitude throught the whole dry conversation provides a snarky undercurrent to the whole thing, where you can't quite tell how geniune his reactions are.  This is clearly a couple who have nothing left to talk about.  Even without Piggy's interruption, this scene would have been great.

But since we must play out our farce, we are allowed to enjoy the mild-mannered hijinks that ensue.  Henson and Oz barely have to do anything with their characters.  It all rests on Cleese's shoulders and he manages to steal the show.  Serving as a strong contrast to the rage-driven tirades of his rude signature character Basil Fawlty, Neville is the most genial fellow Piggy could hope to encounter.

He's not bored.  If he were bored, he would buy a jar of calf's foot jelly.

As many times as I've seen this scene, I never tire of it.  It doesn't even seem as if it was written by the same writers.  This scene captures what many people cite as the universal appeal of the Muppets.  The ability to create humor that both children and adults alike can enjoy.  For kids, the dialogue is much too heady, but they can understand that a wacky pig is infiltrating a house of boring adults.  For adults, it is the subject of conversation that is humorous.  It's quite passionate how dull they are.

Thanks to this scene, the film can now be officialy considered a British farce, and the movie as all the better for it.  Tomorrow, in Part 3, we finally meet the villain, and we'll learn how to properly act when you find yourself with a starring role in a Muppet movie.
Posted by John H. at 9:11 PM