Suddenly, our gang finds themselves in the middle of the Bogen County Fair.  It is unclear why they make this pit stop.  Maybe they needed to stretch their legs, or the carnival looked interesting enough to warrant a rest.  Even as they travel through the fair, Fozzie wonders aloud where they are going.  Kermit ignores Fozzie's concerns and keeps walking into the middle of the fair, as if in a trance (or possibly because the script demanded it). 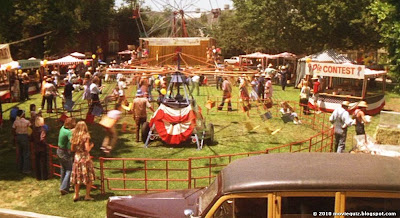 Something bacon this way comes.
The group stops in the center just in time to see the results of the Miss Bogen County Beauty Pageant.  And, much like the El Sleezo Cafe, there are multiple celebrity cameos during this portion of the movie: Elliott Gould, Bob Hope, Richard Pryor.  But the most fleeting and important cameo belongs to Edgar Bergen and his puppet Charlie McCarthy as the beauty pageant judges. 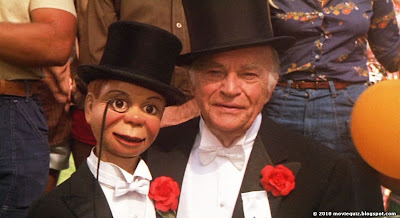 But which is which?
This is Henson's way of acknowledging his own inspirational idol.  The man that showed him that puppeteering was a valid art form .  Bergen had appeared once on The Muppet Show and died during the production of this film, so it was wonderfully fortunate that Henson was able to meet and work with his hero while there was still time.  Casting him as a judge hints at his authorial role in Henson's life, for if Jim had an audience that he was trying to impress, it was Edgar Bergen.
The winner of the pageant is announced and beating out all of the human contestants is none other than Miss Piggy.  As she makes her acceptance speech, she spots a handsome frog out in the crowd and it is love at first sight. 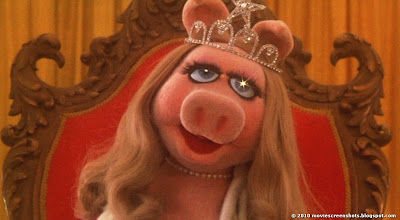 When a wild pig gets that look in her eye, you'd better head for safety, because she's about to charge.
Interrupting her own speech, Piggy starts singing a love ballad and imagining her whole life with this frog she barely knows.  Originally, Johnny Mathis was supposed to sing "Never Before, Never Again," but Henson thought it would be more comedic if the pig sung it.  And of course it is.
I recently discussed the trajectory of Kermit and Piggy's relationship, and if we are to count this as the first moment they truly met, it sums up their love quite nicely.  Piggy's first instinct is to throw herself at Kermit, firmly establishing that they will be together and there is no question about it.  Kermit on the other hand is very hard to read.  At moments he seems shy and flirty and at other times he can hardly stand her.  Frogs can be so wishy-washy. 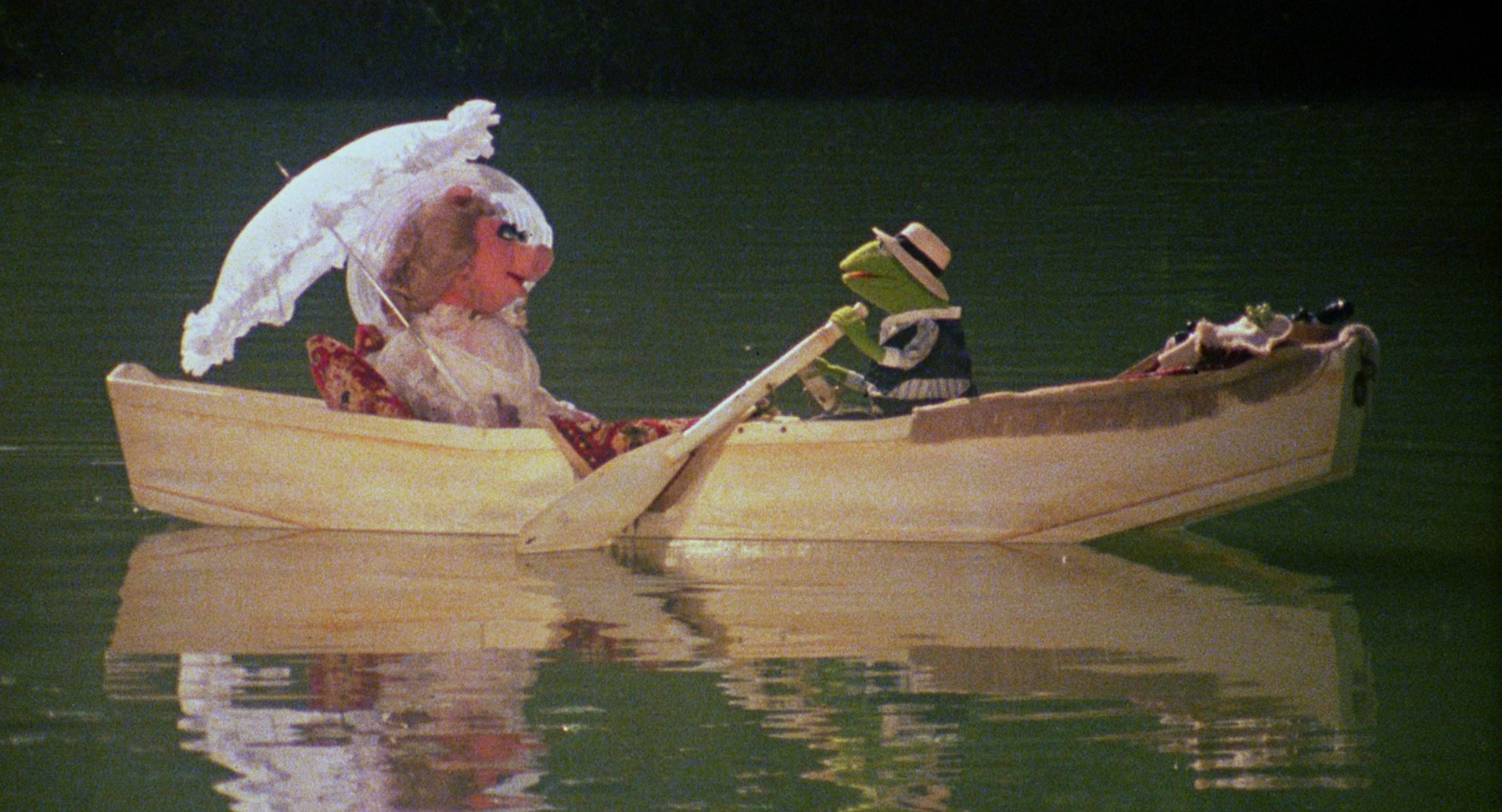 "I love you." "I love my little hat."
Piggy introduces herself to Kermit and misinterprets his invitation to grab some ice cream as an invitation to go to Hollywood with him.  It's easy to see how she made this mistake.  I mean, all throughout the film, whenever Kermit encounters a puppet, he asks them to come to Hollywood without getting to know them first.  He never asks a human to join him, because he's prejudiced against them, I guess.  So, he really shouldn't blame Piggy for tagging along.
But there is no time to quibble over "who asked who to go where" because Gonzo has found himself wrapped up in a death-defying stunt.  In an attempt to impress Camilla, he buys all of the balloons at the carnival and is taken on an Up-like journey across the state. 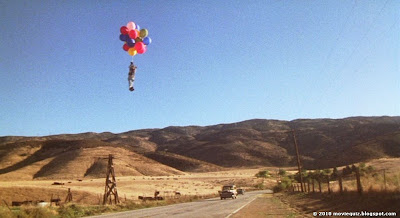 It's about time Gonzo got to do something crazy!
The villains notice this spectacle and realize that Kermit is not far behind.  So Hopper gets out his shotgun to blow out the tires while the gang tries to save Gonzo.  The wind blows him to oddest piece of advertisement ever constructed: a billboard for pies that houses an actual giant pie. 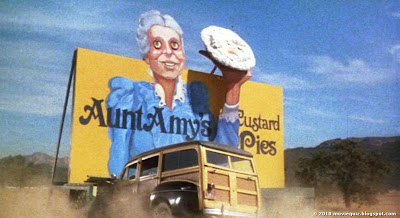 I'm sure that thing is crawling with ants.
It doesn't take a rocket surgeon to know what happens next.  Meanwhile, Sweetums "consoles" the scantily-clad beauty pageant runners-up. 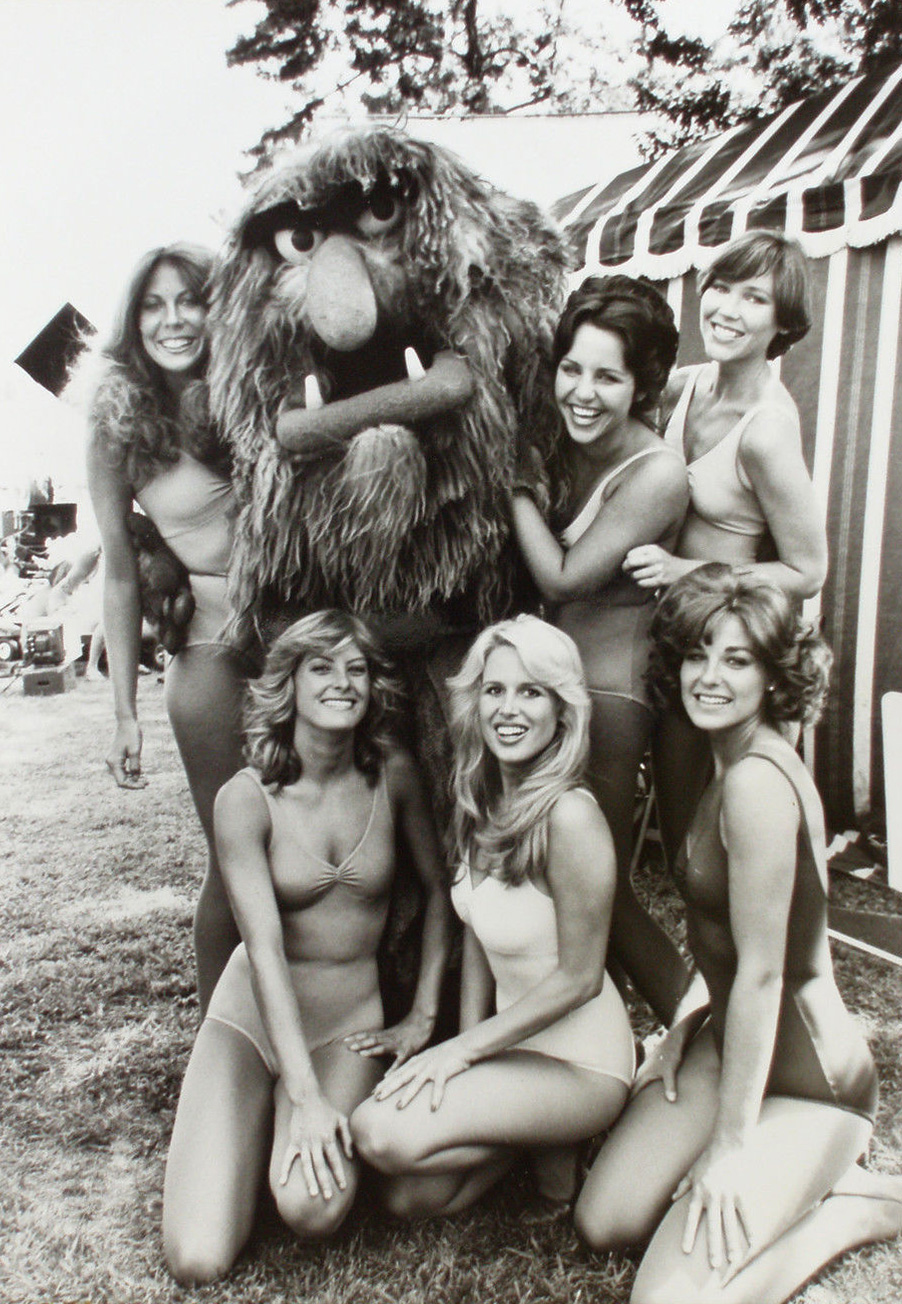 Who needs Hollywood?  Bogen County is awesome!
Now that all of the excitement is over, Piggy forces her way into a romantic evening for two with Kermit at the Terrace Restaurant.  Like many of the locations in the film, the Terrace Restaurant is a marvelous, scenic destination.  It overlooks a moonlit forest and the redwood architecture gives it an authentic charm that provides an excellent atmosphere for romance. 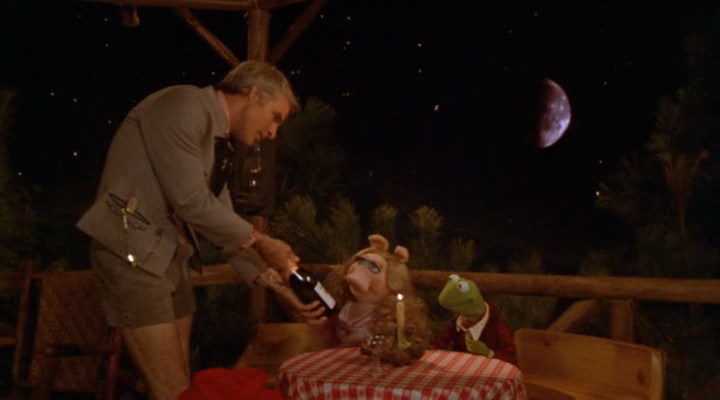 It also staffs Steve Martin as an insolent waiter in short shorts.  The epitome of a five-star restaurant.
Since Frank Oz is represented in the film by Fozzie, there isn't really an analog between the Miss Piggy scenes and Henson's life (especially since Henson's wife Jane was with him from the very beginning of his puppet career).  So this sections of the movie is just to exploit the fact that this is a movie and it had better start adhering to some classic Hollywood conventions. 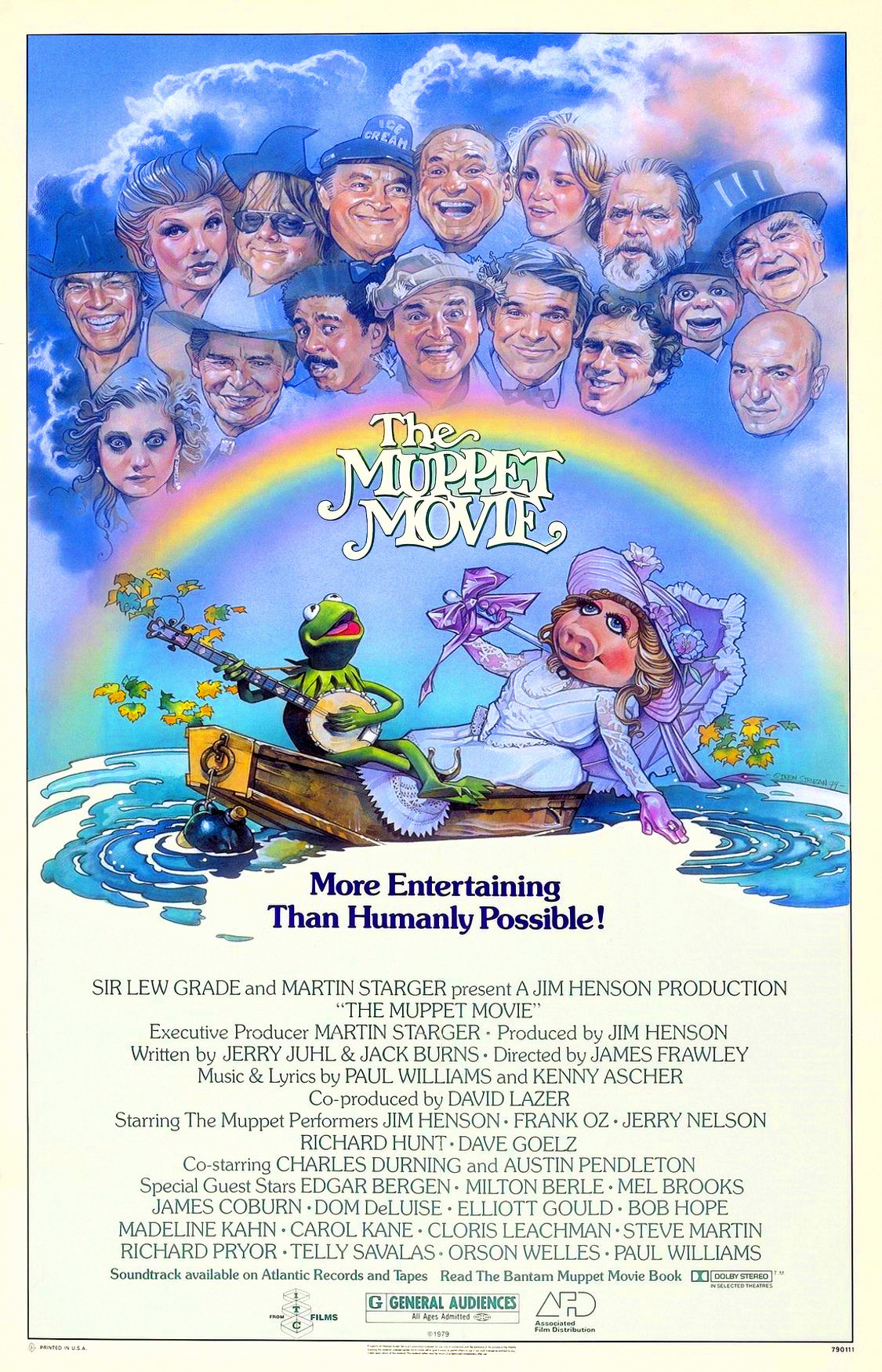 We came to see tons of floating celebrity heads and an interspecies romance!
After some awkward small talk, Pig and Frog feel the spark.  Unfortunately, their chemistry is cut short by a phone call, which causes Miss Piggy to disappear and never return.  Kermit laments that he's just been stood up, which only adds to the confusion about how he truly feels about Piggy.  But, it allows him to sing a blues-y duet with bartender Rowlf the Dog, "I Hope That Somethin' Better Comes Along." 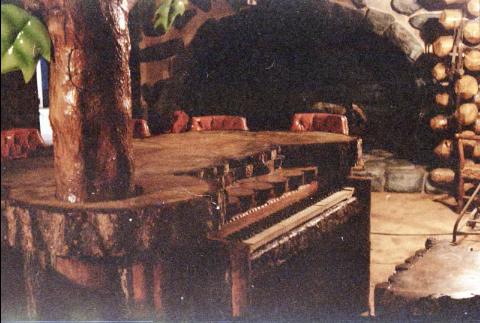 It's a shame Rowlf had to leave this amazing piano behind.
But, lo and behold!  Piggy did not walk out on her date with Kermit (as if she ever would).  She was actually kidnapped by Hopper and his thugs!  And Kermit, in a brave display of heroism, gets kidnapped as well! 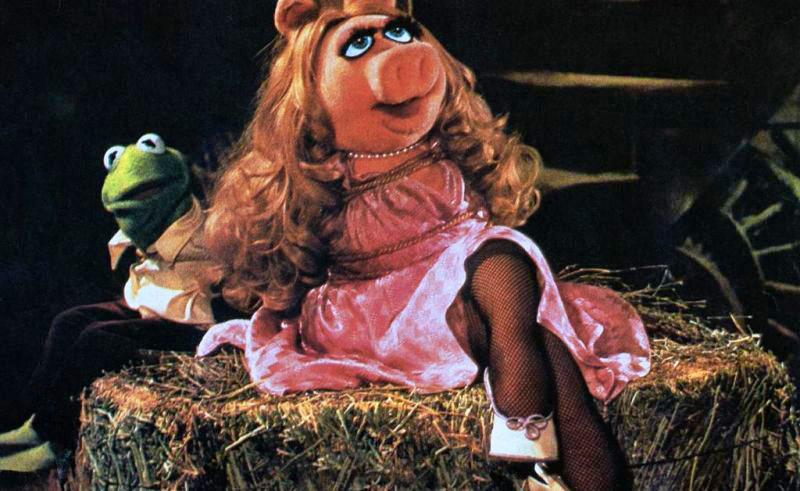 How will our heroes get out of this one?!
Tomorrow: Kermit and Piggy get out of a tight jam and Kermit begins to have second-thoughts about his journey.
Posted by John H. at 11:37 PM