Before Sex and Violence, there was love. 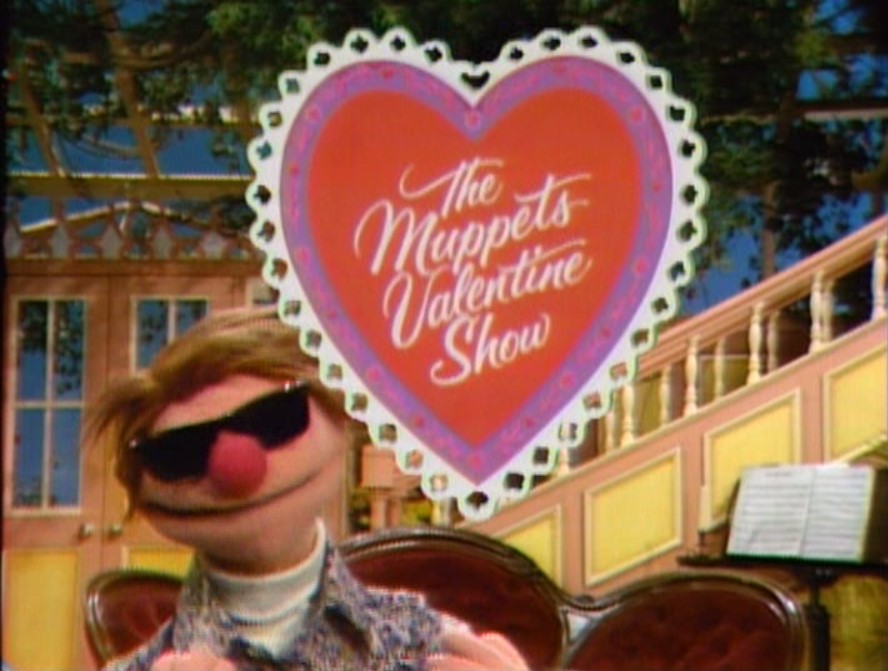 (Part 1, Part 2, Part 3)
The first Muppet Show pilot was in many ways much closer to what the show would eventually become.  Although it wasn't set at the Muppet Theater, there was a clearer distinction between the "acts" and the framing device.  Sex and Violence moved more rapidly, ending sketches as soon as the punchline hit.  The Muppets Valentine Show took its time.  It even had a human guest star! 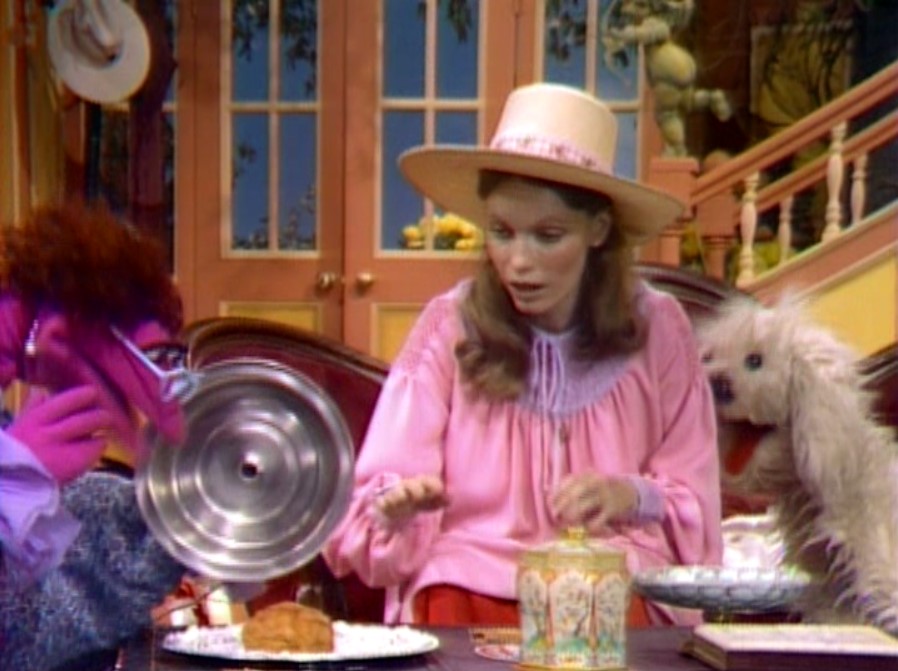 Featuring a pregnant Mia Farrow!
But while the tone is similar to the eventual show, the cast is entirely different (and a lot less interesting). Fortunately, this group of characters did not become the core group of Muppets that we are familiar with today.  Our de facto host is a character known as "Wally." He is currently writing the show (as it happens) and he searches for a good definition for "love."  But...that's all he does.  Sure, he's supposed to be "hip," as evidenced by his sunglasses, but he is severely lacking in the personality department. 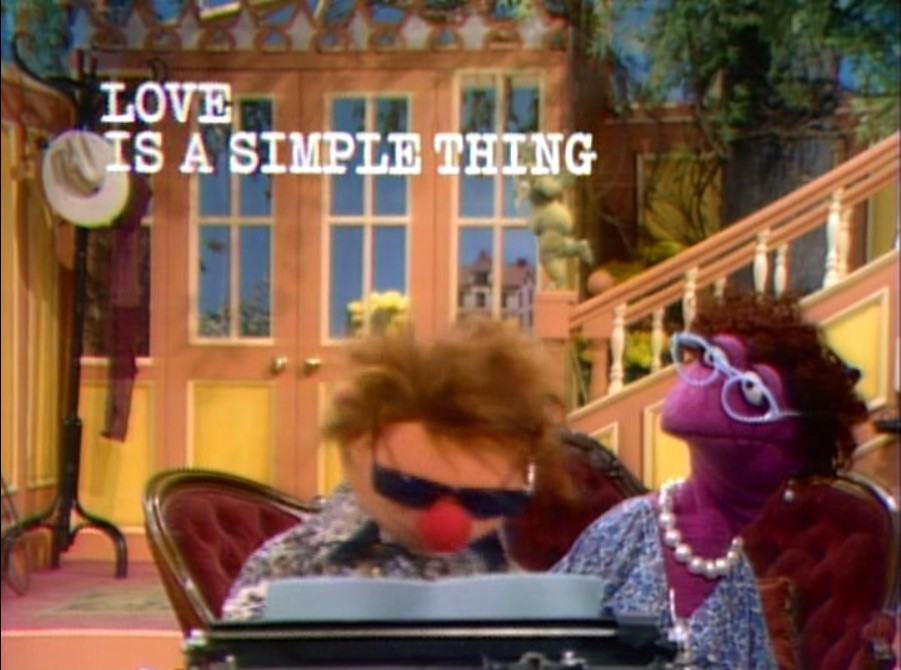 All work and no play makes Wally a dull puppet.
Then there is Mildred and Brewster, who are constantly present but they also leave no lasting impression. 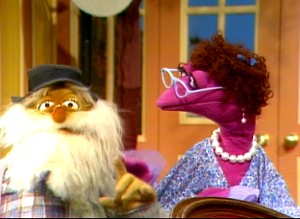 We are a long way from Fozzie and Miss Piggy.
Up next is Rufus the Dog who, unlike Rowlf, cannot speak.  But he is capable of acting very un-dog-like when the occasion rises, making him similar to Sprocket.  However, in this show filled with new faces, it would have been nice to see Rowlf take the spot of Rufus (Rowlf does appear later on in a cameo, along with Bert and Ernie).  Perhaps the reason Rufus was mute was so that he could perfrom a little physical humor with Mia Farrow as she describes the qualities she likes in a dog. 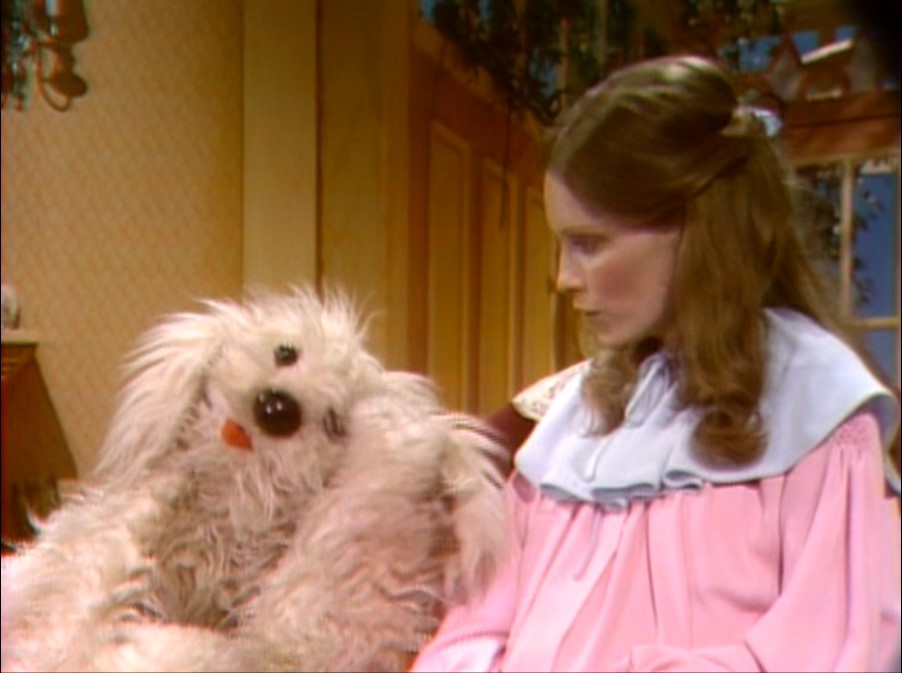 Which then segues into an obnoxiously saccharine love song.
Don't worry, though.  Kermit is a part of the cast, and every scene with him is automatically interesting.  His experience as a Muppet gives him credibility as we watch these other fools bounce around him. 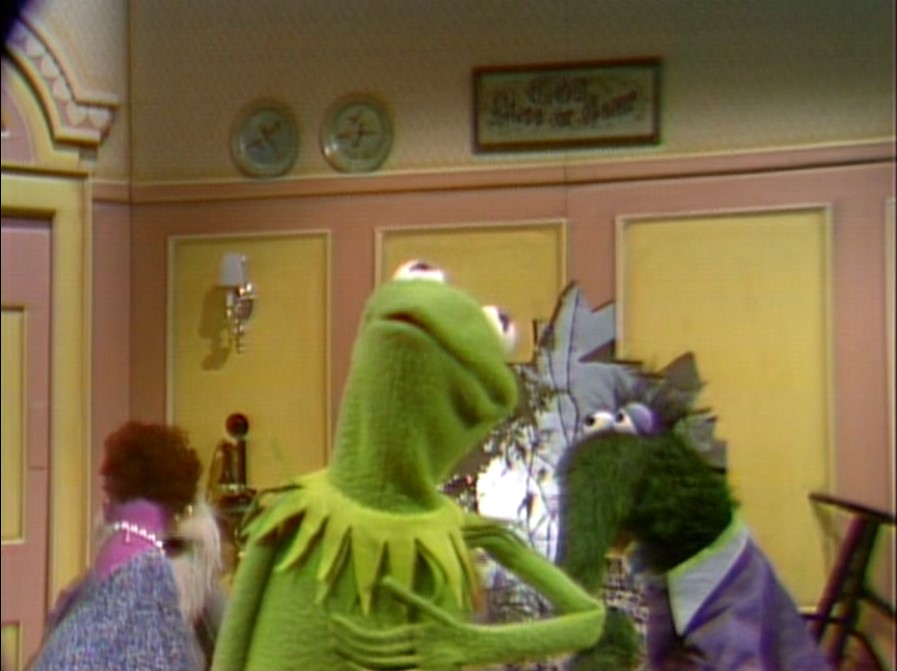 If only he were the host...
He stars in one of the musical segments, an adaptation of "Froggy Went-A Courtin'."  Because it's Valentine's Day, we get to see Kermit with his first love interest, Miss Mousey.  This character would later appear as a short-lived rival for Miss Piggy.  I say "short-lived," because according to an interview, Piggy broke Mousey's neck.  It's canon now.

A short romance.
During this segment, Kermit must fight a giant mouse to win the affections of Mousey, but in the end, she chooses to leave with the self-pitying sad sack known as Droop.  Unlike the previous new characters, Droop actually had a lot of potential.  He was basically a pessimistic Eeyore, but a character like that would have been a nice foil to have among the Muppet gang.  Gonzo originally started out as a Droop-ish character, but his depression was dropped when the writer's realized he was more fun as a thrill seeker. 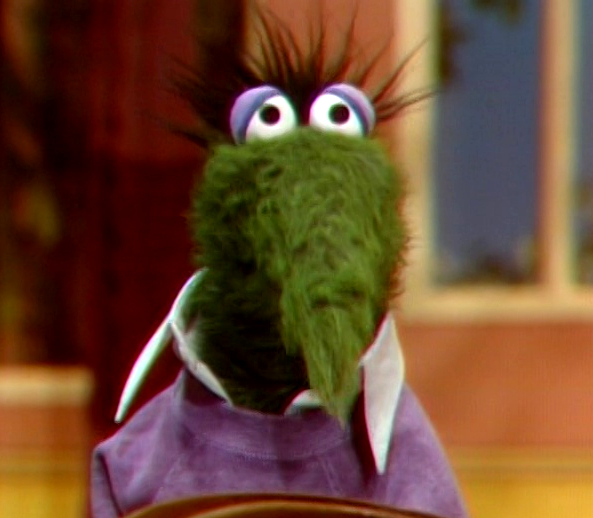 Nobody loves Droop.
Droop went on to make background appearances on The Muppet Show, but he only got one more opportunity to exhibit his trademark behavior.  In the episode with guest star Ben Vereen, Ben helps Droop over come his sadness by singing that Willy Wonka classic, "Pure Imagination."
This clip is not from the Valentine show but when am I ever going to talk about Droop again?
Rounding out the cast are Crazy Harry (known here as Crazy Donald) and George the Janitor.  Both of these characters would continue to have recurring roles on The Muppet Show, but George does have a character defining moment in this episode that is worth mentioning.  Throughout the show, every character knows that love is something worth having, even if they can't define it.  But George doesn't subscribe to all of that love hooey.  He doesn't love anybody and never has.  When he thinks of love, all that comes to mind are mops.  So Mia informs him that he does possess the ability to love.  He just happens to love his mop! 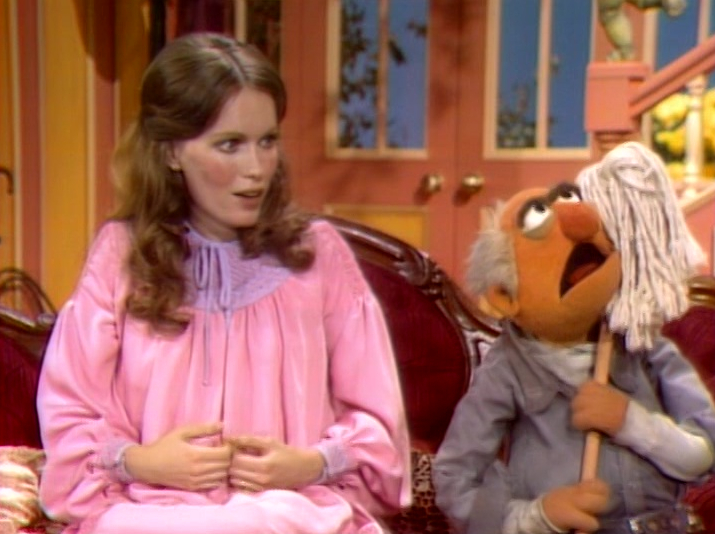 But this janitor-mop relationship pales in comparison to this inspired moment.
And therein lies the problem with this special.  It is so treacly.  It is so sugary.  It is just nothing but sweetness.  The characters lack depth and the message lacks insight.  The only conclusion we reach is that "love is good."  Mia Farrow is game for the appearance, but she lacks a purpose other than talking about how much she loves love.  She shows up for some reason, hangs around for a bit, and then leaves as everyone bids a tearful farewell like the end of Snow White and the Seven Dwarves (actually, that part was pretty funny).
This show lacked the edge that Henson was known for.  It poked it's head out at moments showing that it was capable of so much more.  For instance, this show gave us the Koozebanean Galley-oh-Hoop-Hoop mating ritual. 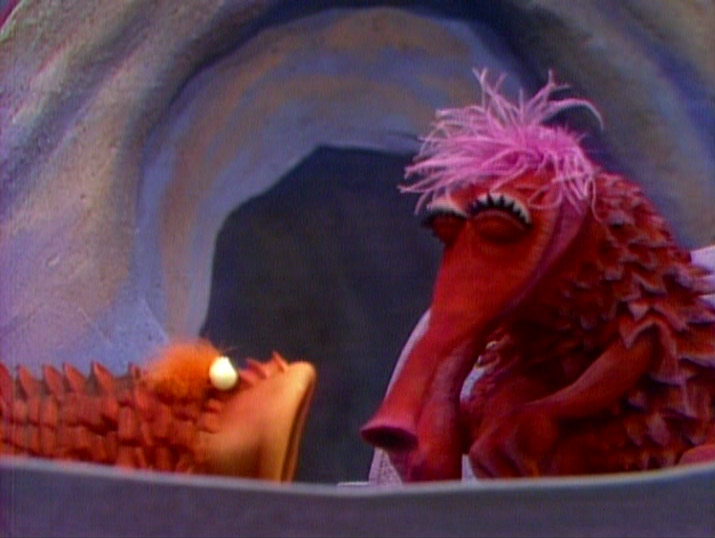 This was the only segment deemed worthy of repeating.
And there were plenty of explosions, courtesy of Crazy Harry.  But the overall feeling of goodness just felt forced.  Although, if the more familiar cast of Muppets were headlining this special, it could very well have been an annual event.  With the preachiness toned down and the antics raised, this show would have been a welcome addition to our yearly Valentine's viewing.
As it stands, it lacks substantial nutrients.  But the writers knew what they were going for, and that was pure sugar.  This is clearly evident by the fact that they brought back the sweetest Muppet that had ever been created and had him dance a duet with Mia Farrow in a most adorable fashion. 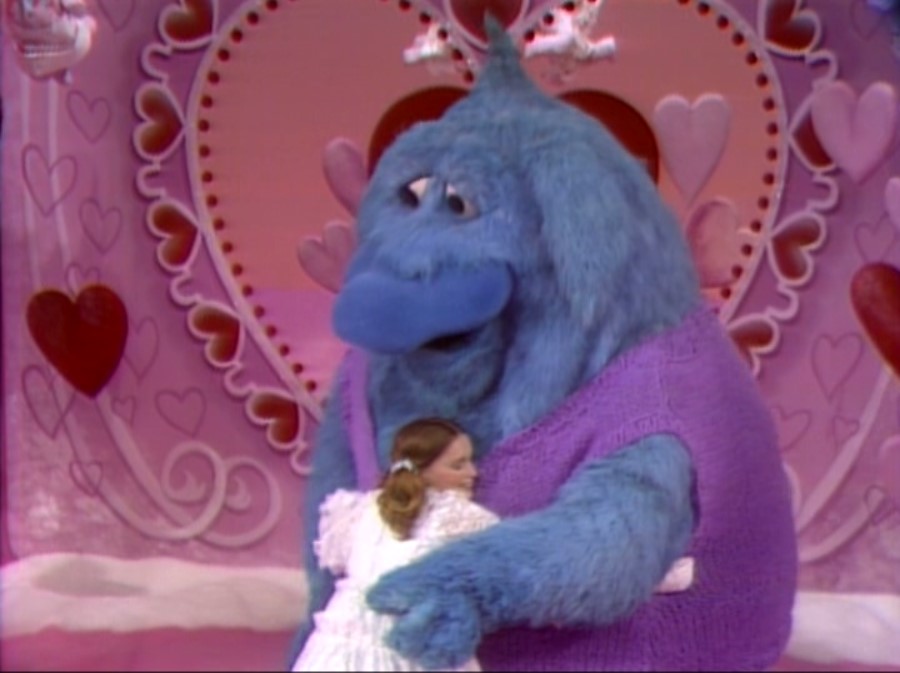 I can't stay mad if Thog's around!
I guess love doesn't have to be deep.  It just has to be appreciated.  That's good enough for me. 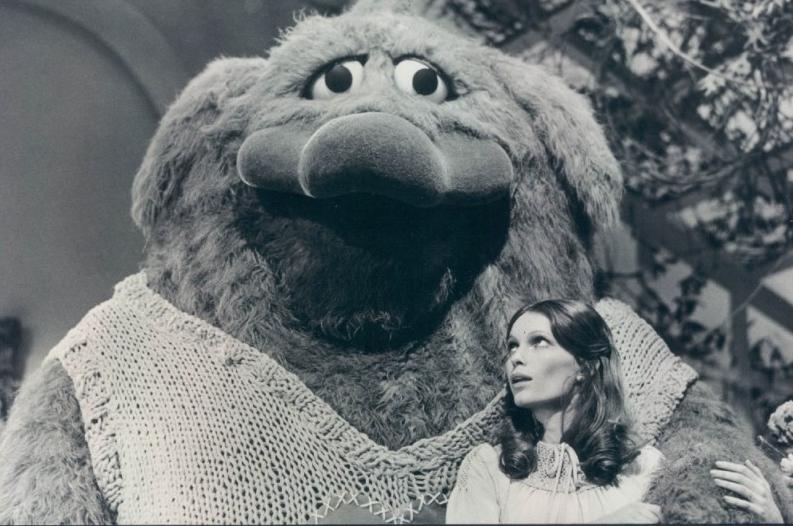