The Muppet Movie, Part 1: How It All Happened (Approximately)

As the 1970s were coming to a close, the Muppets were on top of the world.  Their show was a hit, and Henson was very much in demand.  The logical next step was Hollywood.  And how does a variety show translate into a movie?  Let's find out. 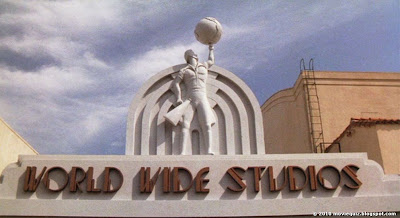 Hollywood: Where dreams come true.
Unusual for the time, the movie doesn't start with opening credits right away.  We are treated to a little prologue that explains the conceit of the film that is to follow.  The opening shot takes us to a movie studio lot where a statue of a director balances a globe on his finger.  This image suggests the idea that a movie director is the greatest puppeteer, one who can control the whole world.
And right away, we are introduced to the harshest villains an artistic genius could encounter: Statler and Waldorf.  They claim to have arrived in order to heckle The Muppet Movie.  Unfortunately, their role was heavily cut from the film.  They were supposed to provide somewhat of a running commentary, popping up in the film to insult the bizarre situations.  But it was felt that this interrupted the flow of the movie too much, and so all scenes were axed, save for their introduction.  (This running gag wouldn't be officially used until Muppet Treasure Island, 17 years later.) 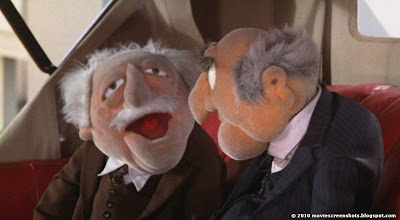 We came to heckle, but we'll sit quietly since it is a movie, after all.
The duo arrives at the private screening theater where the whole Muppet Show cast waits to watch the film.  Each minor character is allowed one moment to shine during this moment, so if your favorite character talked during this scene, it's highly likely that they won't be appearing in the movie proper. 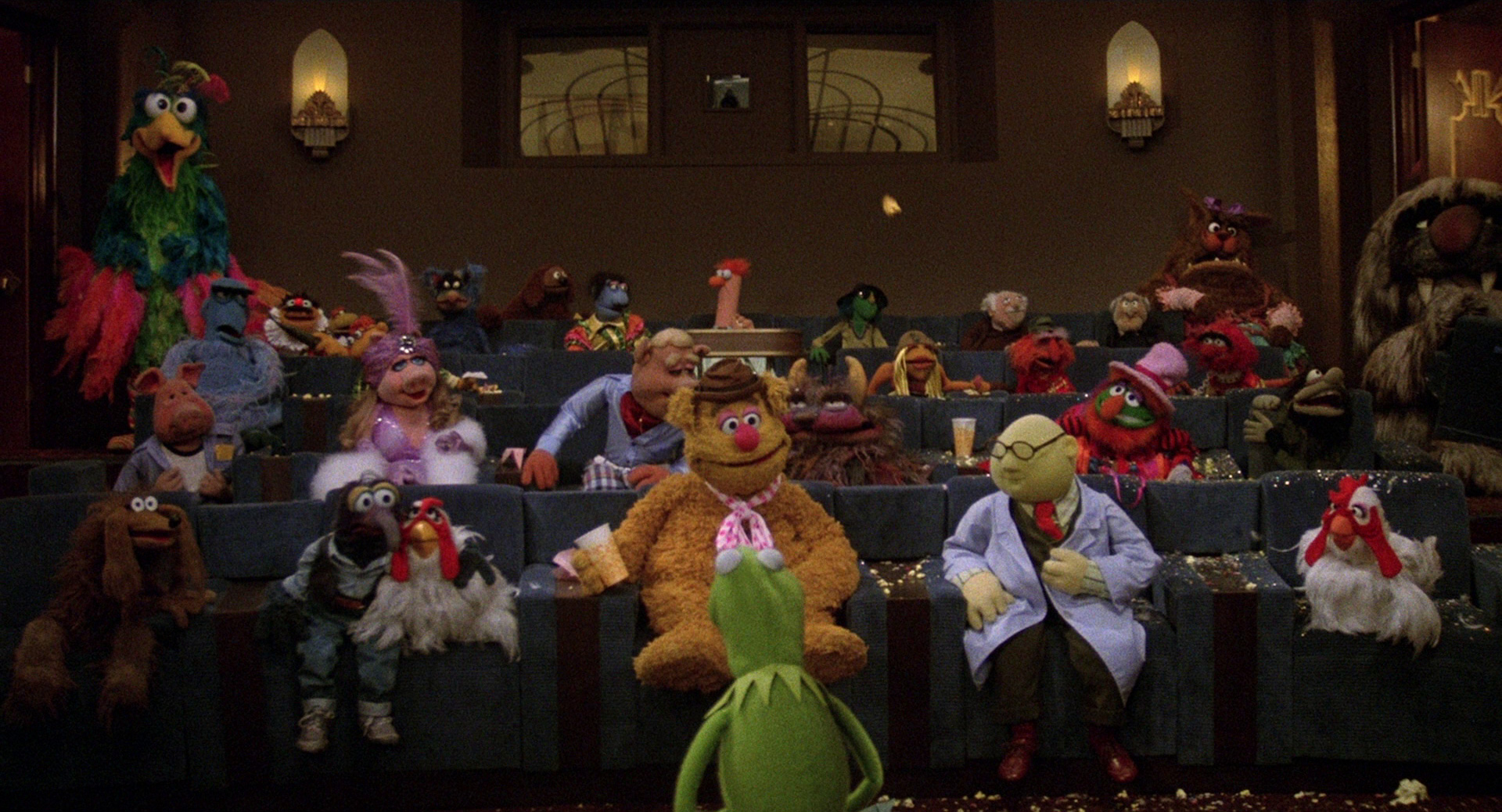 The Fletcher Bird (top left)  is the true victim of this scenario.
Kermit then introduces the film that we are about to watch, making it clear that what follows is a work of fiction and not necessarily canon with The Muppet Show.  Little Robin asks Kermit if this is a true story, and Kermit replies that it is approximately how it happened.  While the facts may have been fabricated, the story that follows is very similar to the journey that Henson himself made to get to Hollywood.  Therefore, for maximum enjoyment, view this film as an allegory for Henson's life story.  And for slightly less-than-maximum enjoyment. watch those wacky Muppets do what they do best. 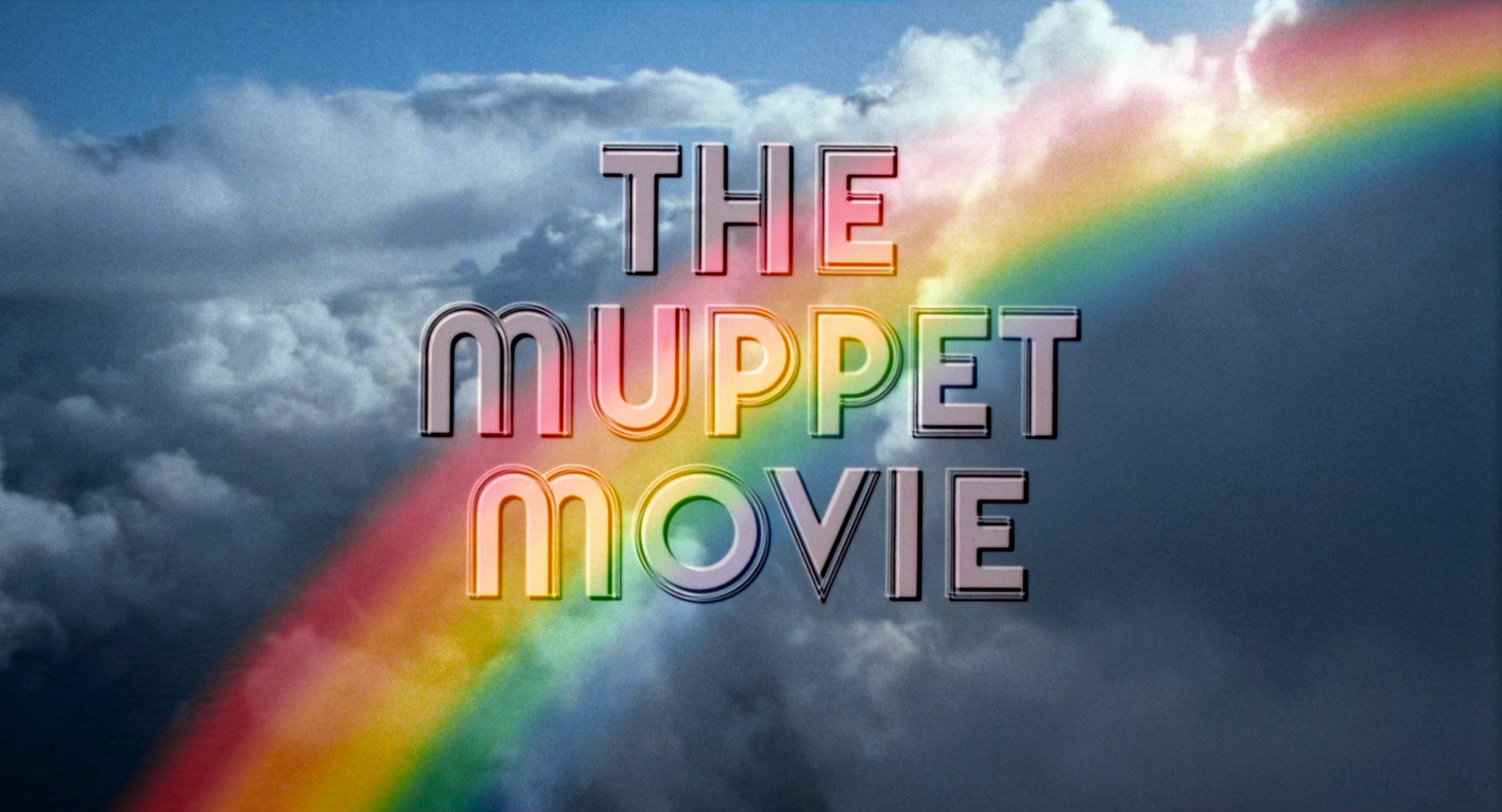 It has begun.
The film within a film starts with Kermit's love song to the creative minds in the world.  "The Rainbow Connection" is now seen as one of his signature songs, and it establishes the mood as peaceful and tranquil.  Kermit is a humble creature, and he only hopes to spread joy throughout the land.

No cares or worries.  But is there more?
Kermit's song catches the attention of a lost agent named Bernie (named after Henson's agent, Bernie Brillstein, who was a valuable asset to Henson's career).  Bernie convinces Kermit to go out west and try to make it big in showbiz.  He's got the charm and the look.  All he needs is an agent and then he's good to go! 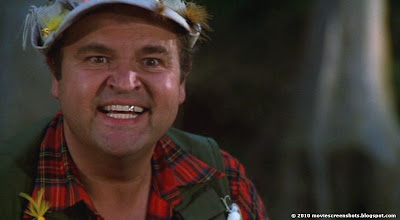 Dom DeLuise as Bernie, always a pleasure.
And so Kermit sets off on his trusty bicycle, an effect that is a lot easier to accomplish than it looks.

Sure, his frog legs may be thin, but they've got enough muscle to pedal.  And speaking of frog legs...
Kermit's bike ride is cut short by the construction of a fast food restaurant specializing in frog's legs.  While he is horrified at the prospect, it appears that frog's legs are surprisingly in demand.  As Kermit stops for grub at the local dive bar, the El Sleezo Cafe, he notices that frog legs are what's for dinner.  This will eventually become a recurring subplot, as a way to have Kermit constantly threatened and in danger.  This is akin to how when Henson was just getting started, there wasn't really a venue for his puppetry.  His art was dismissed as childish and the critics, well, they ate him up. 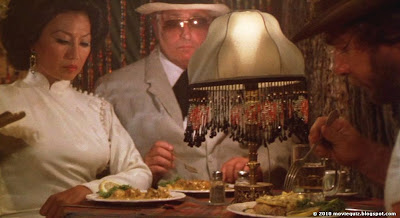 Mmm, the meat of a fallen artist.
After running into a few more celebrity cameos, Kermit witnesses the night's "entertainment."  And, in a run-down establishment where even the scum don't wish to tread, the entertainment is going to have to be the worst insult to artistry that has ever graced a stage: Fozzie Bear.  The audience, always ready for a fight, is very quick to turn on him, of course. 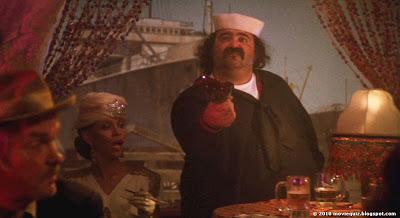 At least Statler and Waldorf never brandished weapons against the bear.
Kermit attempts to alleviate the tension by joining in the bear's act, a stunt that gets both of them beaten to a pulp.  After some quick thinking, Fozzie manages to clear the room by disguising himself as the bartender.  And for once, Fozzie's humor works beautifully.

Or was it because they thought he was a... rabbi?
This gives Fozzie and Kermit a chance to talk and of course, Fozzie is willing to join Kermit on his way to Hollywood.  If you're keeping score, this is representative of Jim's meeting of Frank Oz, where he saw his performance from afar.  Jim felt that he would be perfect for his team, even if he was a little inexperienced and rusty.  A friendship was born.

As Frog and Bear set out in a beat up Studebaker, they are momentarily halted by the villain of this film, Doc Hopper.  Dressed and speaking in a manner not unlike Col. Sanders, Doc Hopper offers Kermit the opportunity to become the mascot for Doc Hopper's Frog Legs fast food chain.  Seeing Kermit's natural performing abilities put the original mascot to shame. 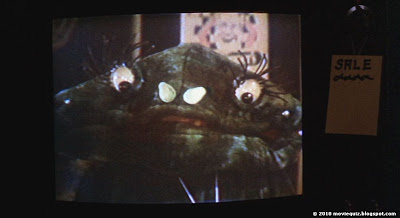 He's creepier than all of the McDonald's mascots combined.  Even Mayor McCheese!
Kermit declines the offer to sell out for a heartless corporation and chooses to follow his dreams so that he can better the advancement of frogs, not aid and support their mass slaughter.  The duo leaves them behind, and Hopper begins his movie-long pursuit.  Everything is set up and our movie is on it's way! 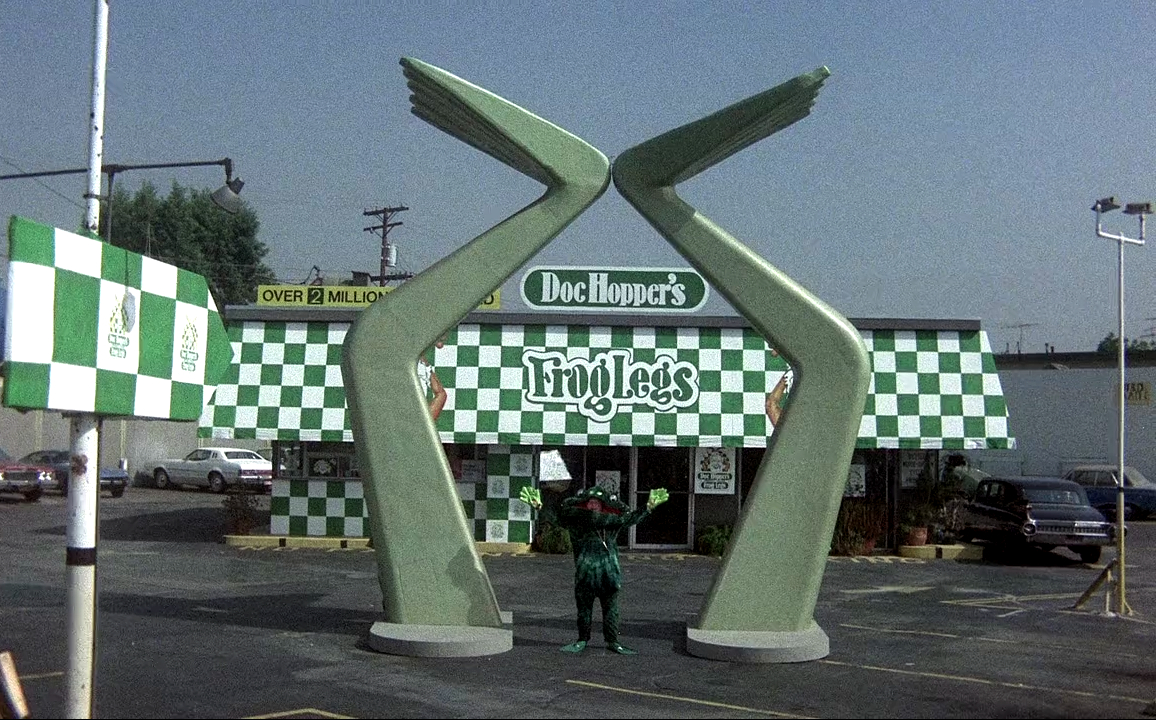 And I am totally craving some fried frog legs right now...
Tomorrow: The road trip begins and the car gets a psychedelic upgrade from some groovy friends.
Posted by John H. at 11:31 PM