Joined at the Hip

If you share an environment with someone long enough, you begin to form a deeper connection with that person.  Whether it is through living together, working together, or playing together, the mere action of seeing each other and performing similar daily routines will strengthen whatever bond you originally had with that person.  With Henson's core group of Muppeteers, they quickly learned exactly how each performer behaved.  With little discussion or argument, they could choreograph large routines and know exactly what each person will do with their characters.  I previously mentioned that certain puppets were designed to be manipulated by two performers at the minimum, and this could make a relationship even stronger.  Eventually, it would be as if the two puppeteers were of the same mind.
As they say, two heads are better than one. 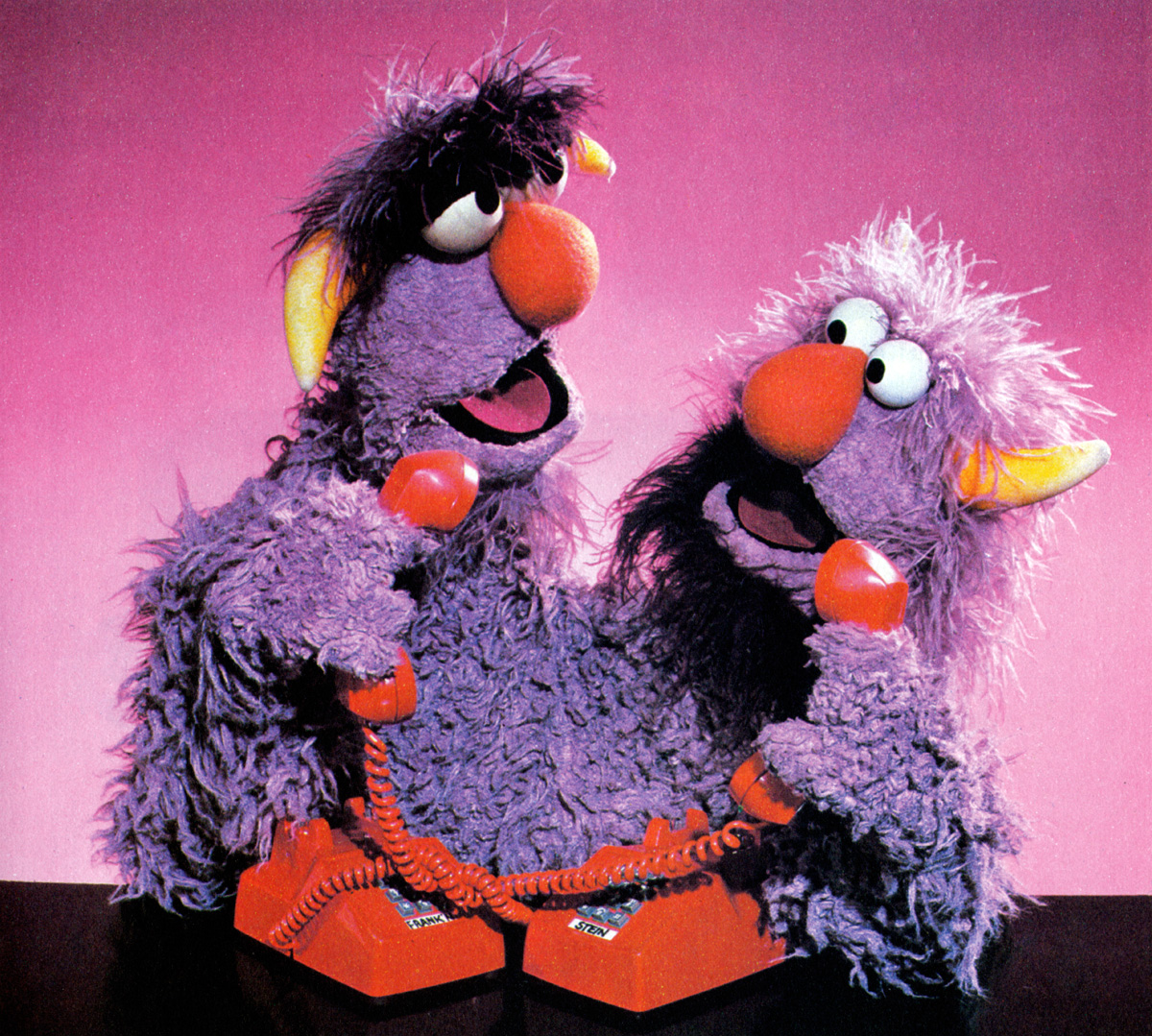 Literally.
The six main puppeteers formed natural parings based on their performance styles.  Jim Henson and Frank Oz were the visionary leaders with iconic duos (Kermit and Piggy, Ernie and Bert), Dave Golez and Steve Whitmire were inexperienced latecomers with an energetic dynamic (Gonzo and Rizzo, Wembley and Boober Fraggle), and Jerry Nelson and Richard Hunt were the more mellow performers that were just comfortable doing their own thing (Floyd and Janice, Robin and Sweetums).  While these last two were capable of producing hilarious material, the two never really got a chance to shine together with their comedy.  That was until one day on the Sesame Street set, the two linked arms, and started improvising with a silly gibberish voice, telling people that they were a "Two-Headed Monster."
Henson loved the idea and quickly designed an outlet for this zaniness, resulting in a unique puppet that required four arms to operate.  The monster(s) were able to tackle concepts such as teamwork and cooperation, because they really had no other choice but to work together.
They also spawned a recurring segment in which they would help the children at home sound out words, by showing that words are just a combination of many sounds that are symbolized by letters.  (The Electric Company had a similar segment in which shadowed heads would sound out words, but the Two-Headed Monster was much more engaging.)
But mostly, the Monster had the ability to just be wacky for wackiness's sake.  Nelson and Hunt wisely chose to have them speak in a made-up baby talk language showing how the two were so in sync that they could communicate in their own special way, just like twins.  While the occasional English word snuck in (usually when it was the subject of the sketch), most of their dialogue was based on the guttural cadences in their voices.  The subject was always clear and could reach a universal audience.
Like the Swedish Chef, gibberish seemed to be the glue that allows two people to work in tandem to create a funny character.  Neither party has to worry about stepping on the other person's lines or doing something that contradicts the other's actions.  It builds synchronicity and makes the other performer stronger.  In the other pairs, it's easy to have a favorite.  Some like Ernie over Bert or Gonzo over Rizzo. But with the Two-Headed Monster, you have to accept the duo as a unit.  You can't have one without the other.
Posted by John H. at 10:10 PM